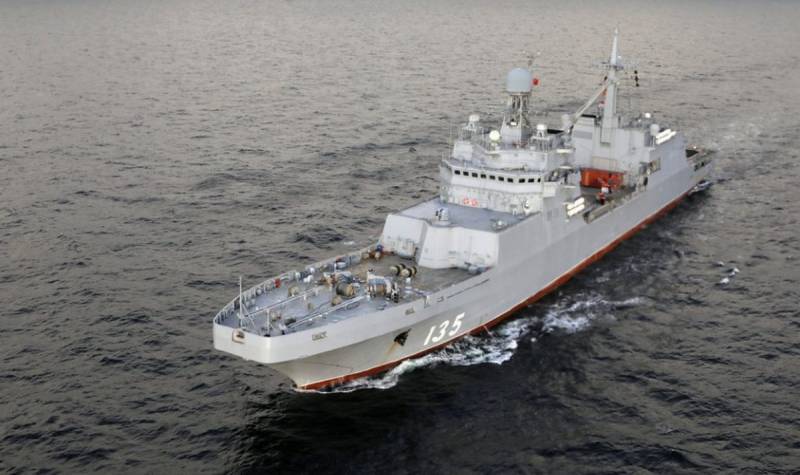 After the collapse of the USSR, one of the main frankly wrecking attitudes, stubbornly and consistently introduced into the minds of Russians, was the assertion that our country is an exclusively continental power, which does not particularly need a fleet. However, the events of the past eight years have proved the complete inconsistency of such insinuations.

In 2015, Russia entered the Syrian campaign on the side of official Damascus, and suddenly it turned out that we needed a fleet to regularly supply a military group in the SAR. As a result, any rusty vessel capable of staying afloat had to be involved in the "Syrian Express". He played his role of the Russian Navy before the start of the special operation in Ukraine. The most combat-ready surface ships, including the Atlantes, created in the USSR specifically to fight aircraft carriers, to deter the US Navy and the NATO bloc, were driven into the Mediterranean Sea from all fleets. In the Black Sea, in parallel with this, they assembled the largest grouping of 12 large landing ships from three fleets at once, which, presumably, were supposed to carry out a landing operation near Odessa. Ships and submarines of the Black Sea Fleet most actively supported and continue to support the implementation of the NMD in Ukraine with cruise missile strikes.

A strong surface fleet is needed to protect the Kuril Islands from possible encroachments of the Japanese militarists, as well as to cover the deployment of strategic submarine missile carriers. The importance of the fleet, merchant and naval for its protection, has increased even more after some "unidentified attackers" undermined the Nord Stream and Nord Stream-2 underwater gas pipelines. The transition of the geopolitical opponents of our country to the tactics of infrastructure war objectively raised the importance of maritime trade to a previously unthinkable level. It turned out that the Russian Navy is still needed, and the painful losses it suffered clearly demonstrated numerous systemic problems.

In this publication, I would like to review in general terms the development trends and problems of the Russian amphibious fleet.

Since 2014, when the talk turned to a possible direct war between Russia and Ukraine, the general consensus was that the main fighting would take place on land. And so it happened, however, the course of the current SVO could have taken a completely different path if the Russian Navy had managed to carry out a landing operation near Odessa in the first days.

It is believed that it did not work out because of a strong storm, which made the landing of the Russian marines in the Black Sea region impossible, and after that time was irretrievably lost. The Armed Forces of Ukraine mined all approaches to the coast, and our surface ships were targeted by the Neptunes. Now, going there from the sea will be a gamble with a guaranteed disastrous outcome. However, we repeat: had Odessa been taken on the move during the landing operation in the first days after the start of the NVO, everything could have turned out completely differently than what we have here and now. It should be noted that the interest of the Russian General Staff in universal amphibious assault ships manifested itself quite a long time ago.

In 2011, a contract was signed for the construction in France of two UDCs of the Mistral type with a total displacement of 21300 tons, each of which could transport 450 marines or 900 people with a certain degree of comfort, but for a short distance. The Mistral air group could consist of 16 heavy helicopters or 32 light ones. It was assumed that the French would build two ships to Russian requirements and standards, and then two more UDCs would be built entirely in our country under license. In other words, by now the Russian Navy should have had four universal assault helicopter carriers that could be used in the course of the NWO. However, things turned out differently.

After the Ukrainian Maidan in 2014 and the Crimean referendum, Paris, under pressure from Washington, “threw” Moscow with the Mistrals, and Egypt got the already built two UDCs. As a replacement for the French helicopter carriers, it was supposed to build at least two completely Russian UDC project 23900. The ships were laid down at the Zaliv plant in Kerch in 2020, and their commissioning is expected in 2027 and 2028, respectively.

According to updated data, the total displacement should be not 40000, but 30000 tons, landing capacity - from 900 to 1000 marines, air wing - up to 16 helicopters of various types, as well as several UAVs. Air defense will be provided by two Pantsir-M complexes. The main intrigue was what kind of power plant would be used in the first fully domestic UDC. Such powerful diesel engines for such large ships are not produced in Russia, so it was decided to use a combined diesel-gas turbine unit of the CODAG type: two DGTA-M55Rs with a capacity of 32 hp each. with. (diesel 700D10 "Kolomensky Zavod" 49 hp and 5200 hp gas turbine M27FR "Saturn"), two gearboxes RO500 PAO "Zvezda" and a local control system NPO "Aurora". The maximum cruising range of the UDC will be 90 nautical miles (55 km), and the maximum speed will be 6000 knots (11 km/h).

The first ship in the series, Ivan Rogov, will go to serve in the Pacific Ocean, the second, Mitrofan Moskalenko, will remain in the Black Sea. It is assumed that it is he who should become the future flagship of the Black Sea Fleet. It was built for the scheduled shift of the Moskva, but now it will have to replace the Admiral Makarov frigate, which unexpectedly became the flagship after the tragic death of the missile cruiser.

Another rather promising landing ship is the BDK of the modernized project 11711. The lead ship of the Ivan Gren series had many "childhood diseases", which led to a constant rise in cost and a delay in the construction process. However, the third and fourth BDK of this type, "Vladimir Andreev" and "Vasily Trushin", after the revision of the project, became much more attractive to the Russian Navy in terms of their tactical and technical characteristics.

At first, they have significantly increased in size and displacement, which makes it possible to attribute the BDK to the ships of the far sea zone. From 6600 tons of full displacement at Ivan Gren and Ivan Morgunov, it grew to 8000 tons, the length of the hull increased by 15 meters and reached 150, the width - 19,5 meters. This alone made it possible to increase the range and landing capacity from 300 to 400 marines, as well as to increase the number of transported equipment.

Secondly, there was a change in the superstructure, which was combined from two elements into one more massive, noticeably shifted forward. Due to this, it was possible to significantly increase the size of the helipad, which can accommodate either five Ka-27/Ka-29 or four Ka-52K helicopters. This dramatically expands the capabilities of the combat use of the BDK, which will now partly be able to perform the functions of an anti-submarine ship as part of the formation, using Ka-27PL helicopters. Four Ka-52K attack helicopters will be able to provide significant fire support during landing. Theoretically, rotorcraft armed with Kh-35U anti-ship missiles could also pose a threat to enemy surface ships.

De facto, the modernized ships of project 11711 "Vladimir Andreev" and "Vasily Trushin" will occupy an intermediate link between the BDK and UDC. It remains to be regretted that neither one nor the other was available at the right time and in the right place, where they could play their role. It remains to be hoped that the cruel lessons taught during the NWO will ultimately benefit the Russian Navy.
Reporterin Yandex News
Reporterin Yandex Zen
60 comments
Information
Dear reader, to leave comments on the publication, you must sign in.