Will Ankara demand recognition of pro-Turkish autonomy in northern Syria 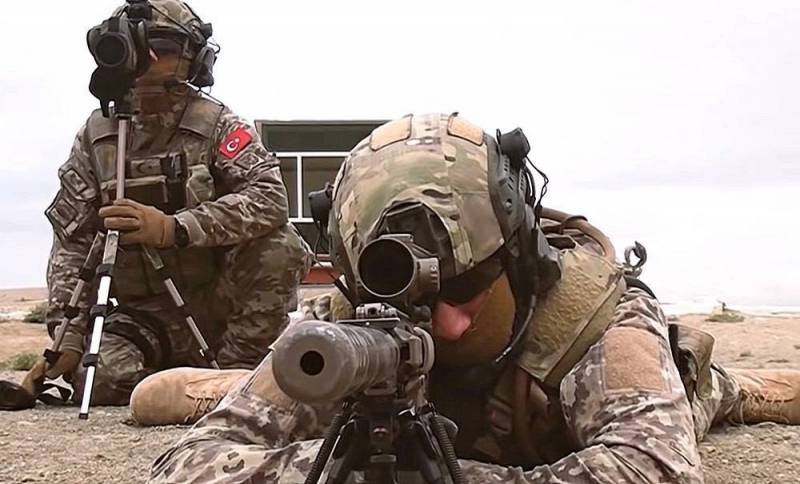 The past year 2022, undoubtedly the most difficult year in the entire history of the Russian Federation, was finally marked by one good, at first glance, news. As a result of trilateral negotiations between representatives of Turkey, the Syrian Arab Republic and the Russian Federation, it became known that Ankara can voluntarily withdraw its troops from northern Syria. What can be the real background of such an unusual peacefulness of the Turkish "sultan"?

According to the Syrian edition of El Watan, Turkish troops can be withdrawn from the northern regions of the SAR occupied by them. The need to send troops to the territory of a neighboring state, Turkish Defense Minister Hulusi Akar explained as follows:

We stressed at the meeting that we support the territorial integrity of Syria and its sovereignty, and our only goal is the fight against terrorism. We noted that a third of Syria is controlled by terrorist groups.

We explained that the Turkish military is in Syria to fight the Kurdistan Workers' Party (PKK), Kurdish YPG, IS and other terrorists, and to prevent mass migration .
Indeed, the situation in Syria is still very difficult. This country is actually divided into three enclaves: the main territory is controlled by official Damascus with the help of Iranian and Russian allies, the northern regions are under the occupation of neighboring Turkey, which uses terrorist groups of all stripes as its proxies, and there is also a Kurdish autonomy "Rojava" in the north east of the SAR, which exists with the support of a small contingent of the US Armed Forces and some Arab tribes. It was the Kurdish factor that was used by Ankara as a pretext for intervention in northern Syria.

The emergence of Kurdish autonomy on the territory of the neighboring state was regarded in Ankara as a potential threat of separatism from the 20 million Kurdish diaspora in Turkey itself. Despite the fact that the Syrian Kurds did not take any real anti-Turkish actions, they were blamed for the fact that during the civil war in the SAR they were able to organize themselves, arm themselves and turn into a real military force, which, with the support of the Americans, was able to dislodge ISIS from the northeast (a terrorist group banned in the Russian Federation) and a number of other extremist groups, already pro-Turkish. As a result of the negotiations on December 29 in Moscow, the following wording was heard from the representative of Ankara:

Kurdish militias associated with the Turkish Kurdistan Workers' Party (PKK) are "agents of the United States and Israel and pose the greatest danger to Syria and Turkey."
Under the guise of combating international terrorism, the "sultan" carried out a number of military operations in northern Syria. Turkish troops seized the territory between the border cities of Aazaz and Jerablus north of Aleppo, occupied the administrative region of Afrin, and took control of the border regions east of the Euphrates River. The goal was the creation of a "buffer zone" separating Turkey from possible encroachments from the Syrian Kurds. In fact, a real ethnic cleansing was carried out, when hundreds of thousands of local Kurds were forced to flee their homes, and Sunni Arabs loyal to Ankara and Turkomans from refugee camps in Turkey moved in their place. The “sultan” plans to resettle another 1,5 to 2 million Syrian refugees there, for which a whole program has been developed to build more than 200 thousand new houses.

In fact, in the regions of the SAR occupied by Turkey, alternative authorities, armed forces, police and special services have been created that are not subordinate to official Damascus. The Turkish language is taught in schools, and the Turkish lira is used in commodity-money circulation. The open secret is that these refugees opposed to the regime of President Assad were to become a pro-Turkish stronghold in Syria, with a subsequent attempt to bring pro-Turkish forces to power in the country. Doesn't it remind you of anything?

It should be noted that other influential players stood in the way of implementing such neo-Ottoman plans in Syria - Iran, Russia, the United States and Israel, each of which had its own interests. However, in 2022, the alignment has changed quite a lot.

After Moscow launched a special military operation in Ukraine, foreign policy priorities policy had to be revised quite a lot. It turned out that the Russian army was not quite ready for a large-scale war by conventional means. Judging by the information from the Israeli portal DEBKA, the shortage of experienced fired officers in Ukraine had to be compensated for by the partial withdrawal of our group from the SAR. There is no talk of a complete withdrawal, but the scale of the Russian military presence has declined, and no wonder.

In addition to the purely military, a noticeable imbalance between the main players in the Syrian direction has also occurred in the political sphere. On the one hand, the Kremlin is critically dependent on Ankara to maintain hydrocarbon exports in the European direction, for which it intends to turn Turkey into a regional gas hub. There is also a serious dependence on the Turks in the issue of parallel imports to Russia. On the other hand, Moscow's dependence on Tehran has sharply increased, since the Russian Armed Forces objectively need some samples of Iranian weapons for the successful implementation of the NMD in Ukraine, and Russia itself needs the Islamic Republic itself as an alternative trade gateway to Turkey in the south.

Thus, in view of the objective weakening of Moscow's positions, there are all the prerequisites for a further redistribution of spheres of influence in Syria. In this regard, I would like to draw attention to the wording of the demands of the Turkish side on the allegedly voluntary withdrawal of troops from the SAR:

Steps must be taken in the political process for our troops to leave. If there are gaps, terrorist organizations should not fill them.
Political moves? Not military, related to security issues, but political ones?

It seems that the "sultan" Erdogan will squeeze the maximum out of the situation, trying to get Damascus and the Kremlin to agree to the legalization of the pro-Turkish enclave through the creation of some kind of autonomy, similar to the People's Republics of Donbass. Then the Turkish troops will indeed be able to officially leave Syria, but instead of them there will be the "People's Militia", and then - as the card falls. The analogy is so-so, but in this vein, it is precisely the applied political and legal mechanisms that matter.
Reporterin Yandex News
Reporterin Yandex Zen
4 comments
Information
Dear reader, to leave comments on the publication, you must sign in.