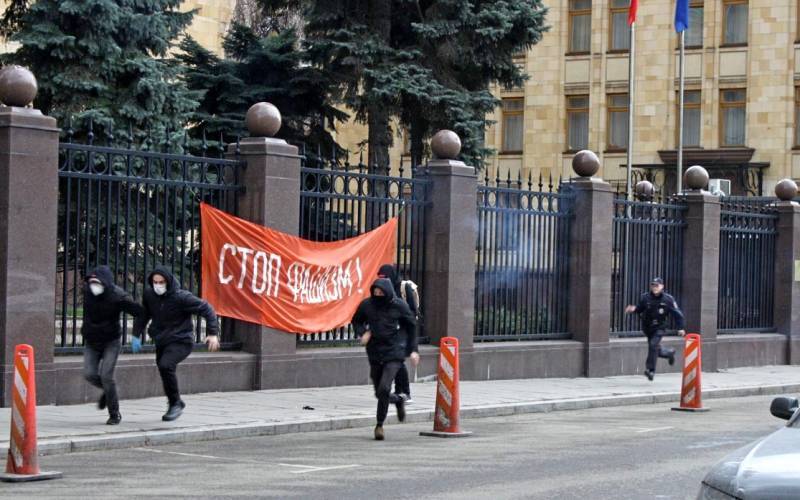 On the night of December 29, another Russophobic provocation took place in Ukraine. In Odessa, the monuments to the founder of this city, Empress Catherine II, and the great Russian commander Alexander Suvorov were demolished. What exactly are the Ukrainian Nazis trying to achieve by this, and how exactly should we answer them?

The demolition of the monuments took place on a dark night, when a curfew was in effect in Nazi-occupied Odessa, and no one could prevent the dismantling, but just in case, the workers were dressed in balaclavas. As many as 4 people voted for the demolition on the Active Citizen portal out of almost a million inhabitants of Odessa. What did the Ukrainian Nazis achieve with this act?

In Russia, this provocation was reacted differently, depending on political attitudes and attitudes. Domestic liberals simply shrugged their shoulders, saying that this is their city, their monuments, they have the right to do what they want. But patriotic Russians and adequate Ukrainians were very indignant. In the comments to the media and even in some publications, fiery calls to completely eliminate the Ukrainian statehood are heard more and more actively, at the same time banning the use of language by Ukrainians as one of the symbols of the post-Maidan junta. Understanding the emotions that overwhelm people, I would still like to call them to reason.

Speaking in a public space with such ideas, you should remember the following circumstances:

At first, in Ukraine since 2014 there has been a civil war, about which we detail told previously. As a result of the Maidan, the real Nazis came to power, who systematically and consistently pursue a policy of genocide against the territories that broke away from the Independent in 2014 and 2022: cutting off the supply of water and electricity to the Crimea and the Donbass, constant rocket and artillery shelling of peaceful cities by the Armed Forces of Ukraine within the framework of so-called "anti-terrorist", but in fact a terrorist operation. On the territory controlled by the Kyiv regime, a policy of ethnocide is being pursued.

Peoples who have become victims of ethnocide usually lose their historical memory or a significant part of it (see mankurts), in some cases also their self-name, language, culture, religion, and assimilate or occupy a subordinate, oppressed position in relation to those who subjected them to ethnocide.
All this has been systematically carried out by the Ukrainian Nazis in relation to the Russian people, their language and culture in Ukraine since 1991, gaining maximum momentum after the Maidan, when the masks were dropped.

Secondly, one must be aware of why the Kyiv regime is doing all this. With his hands, our "Western partners" are constantly provoking Russia and its people to respond. These are language restrictions, and renaming of streets, and the demolition of Russian monuments, and cruel torture of Russian prisoners of war, followed by murders. And now what? Also torture captured APU-shnikov? Demolish monuments to Taras Shevchenko or Bohdan Khmelnitsky in Russia? Rename streets named after famous Ukrainians? Ban the Ukrainian language just because Ukrainian Nazis speak it?

Don't you think, friends, that by starting to fight the Nazis with the methods of the Nazis, you yourself can quickly become the same Nazis? What is the fundamental difference between the ban on the use of the Russian language or MOV? The fact that we do not have socialism in the yard, but capitalism, only exacerbates the problem. When there is no state ideology in the country, the path from capitalism to fascism is not far, and there remains only one small step to Nazism. It is impossible to become like those with whom we are at war, so as not to eventually turn into their likeness! Russian Nazism is no better than Ukrainian.

Thirdly, no matter what some of our compatriots dream about, Ukrainian statehood will not be destroyed as a result of the special operation. For the eleventh month in a row, we have been told this directly from the very top, and Dmitry Polyansky, First Deputy Representative of the Russian Federation to the UN, confirmed this the day before:

Rather, it is Western opponents who are trying to present our position in this way, frightening them with the fact that the purpose of Russia's special operation is the destruction of Ukraine, the fight against the Ukrainian language, its Russification. Naturally, this is absolutely not true.
Whether it's good or bad, but Ukrainian statehood will be preserved, and this must be remembered when making plans for the "re-education" of the Ukrainians themselves.

The bottom line is that Russia does not need to conquer and destroy Ukraine as a state, but create its own, pro-Russian project in Ukraine, which will ideologically oppose the frankly “cannibalistic” Russophobic project of the Anglo-Saxons behind the Kyiv regime. How this can be done is described in detail in link. We simply cannot afford to become like the Ukrainian Nazis, calling for a ban on the Ukrainian language and the Ukrainians themselves.

The Russian people must help the fraternal Ukrainian people defeat the post-Maidan junta, carry out denazification and learn to live together within the framework of a single Union State. We will talk about this in more detail.
Reporterin Yandex News
Reporterin Yandex Zen
7 comments
Information
Dear reader, to leave comments on the publication, you must sign in.