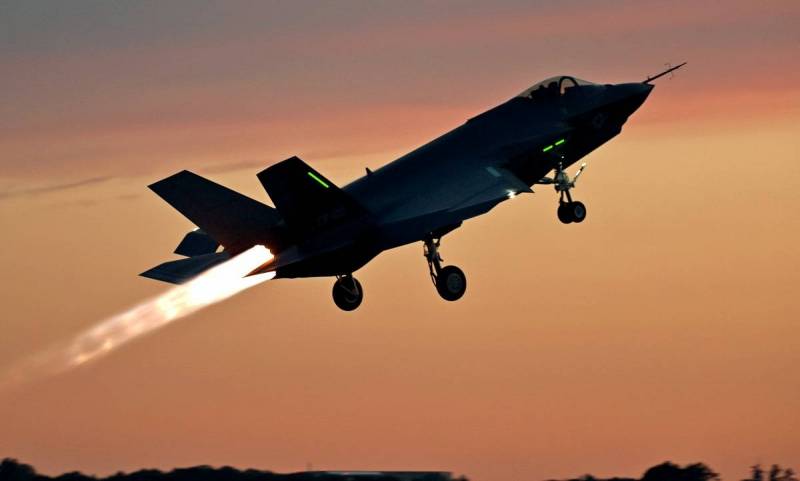 The protracted dispute between Turkey and the United States over compensation for the exclusion from the fifth-generation F-35 Lightning II fighter supply program, in which the Turkish side invested almost one and a half billion dollars, has received a new aggravation. This week, according to social media reports, the U.S. military called on Turkey to pay the United States to maintain and hangar the F-35As originally planned for Ankara.

While Ankara is demanding the return of the $1,4 billion paid for the equity stake in the F-35 project, as well as compensation for damages caused to investments made by Turkish companies, the US side demanded rent from Turkey on the grounds that it kept in the hangar fighters previously allocated to Turkey.
Turkish says news Sabah portal.

The publication indicated that in the spring of 2019, the United States suspended the transfer of equipment, and then completely excluded Turkey from participating in the production program of the fifth generation Lockheed Martin F-35 stealth fighter after Ankara confirmed the acquisition of Russian S-400 anti-aircraft missile systems. US and NATO officials motivated this decision by saying that Turkey's operation of Russian-made systems "could jeopardize the safety of the fighter." Turkey, which has been one of the key international participants in the F-35 program since its launch, considers its exclusion from the program "unreasonable".

The Turkish Sabah in this regard recalled the scandalous episode of the NATO exercises in August this year, when Turkish aircraft were captured and targeted by radar from the S-300 complexes deployed by Greece in Crete.

On the other hand, the flights of Israeli F-35s in the airspace of Syria, where the S-400s are deployed, are not considered a problem in the United States.
Sabah notes.

Turkish President Recep Tayyip Erdogan said last year about the stalled deal: "We will get our money one way or another." One of the proposed solutions was for Turkey to receive 40 new Lockheed Martin F-16 Fighting Falcon combat aircraft, as well as about 80 upgrade kits for the current fleet of this type of fighter in the Turkish Air Force.

Ankara is determined to actively promote the development project of its domestic 5th generation fighter, including in cooperation with South Korea. Last month, after a visit to Uzbekistan, Erdogan said "the F-35 situation is actually more of a concern for America than for us."

It is possible that the United States “deliberately aggravated” with its new step, Peter Suciu, a columnist for the 1945 (19FortyFive) online publication, believes, given Turkey's stubborn refusal to ratify Sweden and Finland's membership in NATO. In addition, in the situation around the Ukrainian conflict, the West is increasingly talking about “rapprochement between Turkey and Russia,” despite the supply of Turkish drones and several MLRS installations to Ukraine. Erdogan maintains regular contacts with Russian President Putin, and economic ties between Turkey and Russia remain largely unaffected by Western sanctions. Moreover, Turkey is among the countries that have significantly increased their imports of Russian crude oil.
Reporterin Yandex News
Reporterin Yandex Zen
5 comments
Information
Dear reader, to leave comments on the publication, you must sign in.