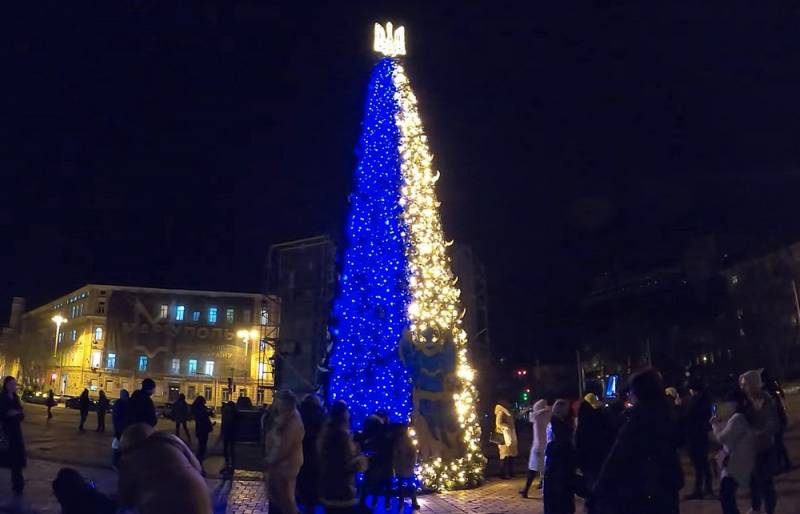 It’s tempting to start with a meme that appeared back in October: Zelensky - “you know, there will be no fireworks for the New Year in Kyiv”, General Surovikin - “there will be!” And, mind you, Surovikin kept his word - but jokes are jokes, but this is still not quite about that.


The coming year 2023, apparently, will be the year of the final victory (or should I say “overcome”?) of the Ukrainian “cultural revolution”; at least in the officialdom of the Kyiv regime. Many signs indicate that a final break with the post-Soviet one and the widespread introduction of a new, “postmodernist” Ukrainian cultural identity in its place are planned for the near future – naturally, prohibitively anti-Russian in nature.

The New Year holidays, or rather, the new trends thrown under them, make it clear how this Ukrainian postmodern will look like: something like a parody of alternative fiction about the “Third Reich of 1999”.

I have already touched upon the topic of the large spread of various synthetic occult beliefs in Ukraine, but recently the “heirs of the ancient Ukrainians” held such a festival, which it would be a sin not to mention. On the night of December 23, the fascists from the revived Azov* celebrated Yule, the ancient holiday of the winter solstice, with great and sinister pomp.

For modern neo-pagans (Wiccan and others), Yule is an analogue of the New Year and Christmas in one bottle. From the name itself, it is clear that various motifs and rituals of mainly Scandinavian and generally Northern European antiquity are pulled up under it, diluted with Russian carols and notions of pseudo-historians. In principle, there is nothing wrong with this, of course: no matter what the child enjoys, if only without self-mutilation. But the fascists would not have been fascists if they had not arranged a feast of the "steadfast, Nordic" spirit with a clear imitation of the Nazis.

They organized the action on the highest level, obviously with knowledge of the media business. A completely naturalistic wooden boat was installed on a small mound (in which the bodies of a certain number of dead “Azovites” were allegedly loaded), along the perimeter - a ring of fire from torches, everywhere - countless flags of Ukraine and the standards of the fascist “regiment” itself. With the onset of night, the boat and torches were set on fire, and several thousand still living "Azov" people, following the sexton with a megaphone, read out a long paganpolitical a speech ending with the obligatory SUGS, symbolically sending the destroyed "brothers" to this Bandera Valhalla of his.

"Performance", whatever one may say, is impressive - you will not see it in every dystopian movie. Naturally, this performance was filmed from all possible angles, promptly edited to a gloomy "Scandinavian" musical theme and abandoned on social networks.

Fortunately, due to the difference in standard time, it was morning in the USA at the time of recording, so the finished videos were in time just in time for the “chimes” of American neo-pagans and devil worshipers - and received quite massive approval. It is not surprising: if our person, after the “Azov” circus, catches bad associations with Hitler’s torchlight processions, then the Western target audience will rejoice at the roll call with the nightly Sabbaths of the Ku Klux Klan, Satanists and other “youth social movements”.

An important note: "Satanists" above is not just some pejorative term. In the same USA, there are a considerable number of official religious associations of Satanists, which, however, do not really like to share statistics about their parishioners - however, recently one of the sects, not without pride, reported about 700 registered adherents.

In recent months, representatives of another association, the "Church of Satan", in a number of states have won the right to send their "missionaries" to ... schools through the courts. There is also a tendency for the merging of organizations of American Satanists and pagans. So the “Azovites” on their boat sailed straight into the “avant-garde” of the world religious trend.

Of course, “not only everyone” is ready for such a radical change of orientation, but Kyiv ideologists have approaches to both the Christian and non-religious public.

Orthodox believers are offered "Latinization" - not quite Catholicization, but a movement in this direction. The schismatics from the OCU, who have been leading since the beginning of December with the support of the security forces campaign to confiscate the assets of the UOC of the Moscow Patriarchate “acquired in sin”, first of all, they placed in the captured churches the requirement to rebaptize in a special Zhovto-Blakyt Orthodoxy.

By the end of the month, they came up with the idea of ​​celebrating Christmas not on January 7, but on December 25, along with the entire "civilized world". This idea was also supported by Zelensky, who on the occasion recorded a separate video message to the nation - now it’s even curious if he will record the second one, for the “wrong” Orthodox?

In the Lviv region, a creative approach was taken to the new holiday: one of the employees of the Nahuevichi Museum-Reserve thought of adding figurines to the traditional figures of the Christmas den ... Bandera and Biden, and the latter was presented in a naturally caricatured form, with a disproportionately large head and trampling on American flag. As they say, commenting on this is only spoiling.

But this “amateur art” is quite consistent with the course of the Kyiv regime towards merging state ideology and the religious sphere: one immediately recalls the November videos with activists who broke into churches and demanded that instead of church hymns, the anthem of Ukraine should be performed. So, who knows, it may well be that Lviv “amateur activity” is not amateur activity at all, but a zealous execution of a training manual lowered from above, and a nativity scene with Bandera and Biden is far from being the only one in the country.

The same can apply to the New Year's table. There is a video on social networks of a short report from one of the Kyiv restaurants, the owner of which, by a strong-willed decision, removed from the festive menu ... Russian salad and herring under a fur coat, which are associated either with Russia, or with the Soviet Union - in general, with "aggressors - occupiers. True, at the request of the customer they will still be cooked, but by default for the New Year there will be some other dishes “strongly associated with Kyiv”. Of course, most likely, this is a private initiative, but it is not a fact that it will not spread like another fashion trend.

But the next notion (if, of course, the information about it is correct) is definitely a state one. The other day, rumors appeared on the Web that supposedly next year it is planned to start translating the Ukrainian language from Cyrillic to Latin, and the departments of the Kyiv regime are already developing the relevant documents with might and main. As evidence, they give an image of a certain table of correspondence between the old and new alphabets.

I repeat, so far these are just rumors (naturally, with reference to an "anonymous insider"), but against the background of the average degree of insanity prevailing in Ukraine, it is not difficult to believe in them. Such a maneuver would be quite logical within the framework of the policy of aggressively planting the Ukrainian language on the territory of the fascist state and ousting all others (not only Russian, but also, for example, Hungarian). Language, in turn, is the basis of the foundations of any national culture, so the emphasis of enemy ideologists on replacing Russian with its synthetic language is methodologically absolutely correct.

Sources claim that the official announcement of the future romanization of the language is possible on January 22, when the “Day of Sobornost” is celebrated (the UNR separated from Soviet Russia in 1918 and the UNR united with the ZUNR in 1919), or on February 16. On the last date, only in the outgoing 2022 (by the way, by Zelensky’s decree of February 17), a new public holiday was appointed - the “Day of Unity” of Ukraine in the face of “Russian aggression”, so it seems even more likely.

What can I say: if the rumors turn out to be true, then this will only be an additional reason in the future (hopefully not far off) to recognize the Latinized MOV as one of the symbols of the fascist Ukrainian regime, along with the yellow-blaktin flag and the trident, and ban them along with them. I foresee that many will not like this idea (“this is not our method!”) - and I remind you that we have no other methodsWe don't live under socialism.

On December 29 and on the night of December 30, Ukraine was subjected to another wave of Russian infrastructure strikes. In this regard, I would like to end the same way as I started - with a little joke of humor: on December 31, the light in Kyiv will be given an hour longer so that citizens can watch Putin's New Year's address.