Should Russia pull out of the CR929 airliner project with China? 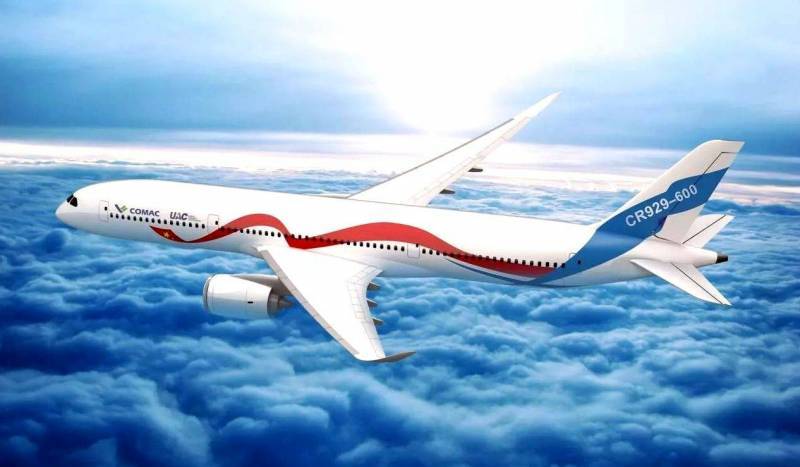 Towards the end of the outgoing 2022, another negative news in economics. The head of the Ministry of Industry and Trade of the Russian Federation Denis Manturov said that negotiations with Beijing will be held in the first quarter of 2023, as a result of which the fate of our further participation in the project of the joint Russian-Chinese liner CR929 will be decided. His prospects are, frankly, so-so.


As told TASS Minister and vice-premier in one person, the PRC is considering the possibility of attracting third countries, apparently from among unfriendly to Russia, to participate in the project of a long-haul wide-body airliner. Moscow objects to this and is ready to reconsider its format of participation in this ambitious project, Manturov explained:

We do not consider such a format for ourselves, given the current situation and all the risks that we understand very well. Therefore, in order not to encounter them, we may make a decision for ourselves from a partner within the framework of this project to move into the status of a supplier of aggregates and components.
And who would have thought that this would happen, right? As a matter of fact, we have consistently talked about this for many years.

Chronicle of one "kid"

The fact that Russia was destined to be eventually fooled by the Chinese partners, we warned back in ARTICLES dated September 1, 2019 under the headline “What if China “throws” Russia with the CR929?”. But how beautifully it all began ...

Technologies The production of wide-body airliners at one time was possessed only by the USA, France and the USSR. The Russian Federation, as its successor, has so far retained competence in this area only due to the fact that the first persons of the state fly on Il-96 wide-body airliners. And China decided to take advantage of this, wanting to enter the top league of the world aircraft industry.

It was assumed that the joint Russian-Chinese long-haul liner will be able to carry from 230 to 320 passengers, depending on the modification. The shares of both partners were to be equal, 50% to 50%, respectively, and each side committed to invest $10 billion. At the same time, we quite rightly pointed out that Russia was a junior partner in this project, which was hinted at by its very abbreviation. In our country, only the production of wings was to be located, and the production of the rest of the fuselage and assembly - in China. At the initial stage, the aircraft was supposed to fly with American or British engines, and later it was supposed to be re-engined for promising PD-35s, which have yet to be developed and put into production.

What, three years ago, made us doubt that everything would eventually go according to plan? It was precisely the fact that Russia was a junior partner for China, from which it was required to develop on a turnkey basis and transfer technology for the production of wide-body airliners.

Even then, there were rumors that the Chinese were determined to share the sales of CR929 in their home market and everyone else. It was a very bad sign. The fact is that China's own needs for liners of this class were estimated at 1200 aircraft, in the Russian Federation - from 50 to 120 over the next two decades. In other words, Moscow's dreams of earning 50% of the profits from the sale of co-produced liners in the richest domestic Chinese market flew like plywood over Paris. Having received all the technologies and documentation they require, the Chinese partners would only have to import-substitute the wings, which is not a big problem for them. What would Russia be left with then?

With wings but no plane. In order to manufacture the CR929 here, it would have to be completely built from scratch. An attempt to sell the same aircraft on the international market at the same time as the PRC would also not lead to anything good. The Chinese-assembled CR929 would clearly differ from the Russian-assembled CR929 in lower cost and larger production volumes, which would allow it to offer buyers more favorable terms. In conditions where there is a domestic wide-body Il-96, albeit a small one, but produced in a series, this would be real sabotage.

It was clear from the very beginning that this would be the end of it all. Despite this, under the publications on this topic there were many impartial comments about the author of the lines. Nevertheless, a sense of civic duty prompted to return to this topic again and again. September 3, 2021 on the "Reporter" came out article under the telling title "Instead of the "Chinese" CR929, Russia needs its own Il-96-400M." AT article dated April 10, 2022, under the title “CR929 wide-body airliner will fly to China, and Russia will remain with the Il-96-400”, we came to the following conclusion:

Having our own wide-body airliner, it makes no sense to fence the garden with the localization of our CR929. Everything, this is objectively already a Chinese aircraft, which we almost "gave" them. In order for the quotes to really not disappear, it is necessary to accelerate the development and certification of the heavy-duty PD-35 as much as possible in order to start supplying it to China for the production of CR929. No joint ventures with their localization in China should be allowed - only the sale of finished engines in the assembly! Then a share of 50% from the sales of liners will definitely not float away.

We ourselves will fly on our native Il-96-400s, which also need to be remotorized for PD-35s and, possibly, equipped with composite wings. The entire production and component base for them is available, the series will gradually grow.
The idea of ​​withdrawing from the CR929 project in favor of the domestic long-haul airliner Il-96 with its modernization and remotorization was voiced by us in article dated July 2, 2022 under the title "Russia's refusal from the Chinese CR929 gives the future to the domestic Il-96 airliner".

And now everything has come exactly to the situation that we predicted back in 2019. Russia has donated technology to the PRC for the production of wide-body aircraft, and now the Chinese partners have created conditions under which it cannot remain in the project any longer. Apparently, Beijing is now giving Moscow the opportunity to save face by leaving with its own head held high. Another long-term forecast, alas, comes true.

Let's note that with all the negativity from what is happening, there are also positive aspects in it. Now the domestic airliner Il-96 is becoming uncontested for us, and we will have to focus on it, without fussing as junior partners with China. It’s better to leave the CR929 project now, at an early stage, than later, having previously ruined the IL-96-400 under the plausible pretext of “uselessness”.
Reporterin Yandex News
Reporterin Yandex Zen
6 comments
Information
Dear reader, to leave comments on the publication, you must sign in.