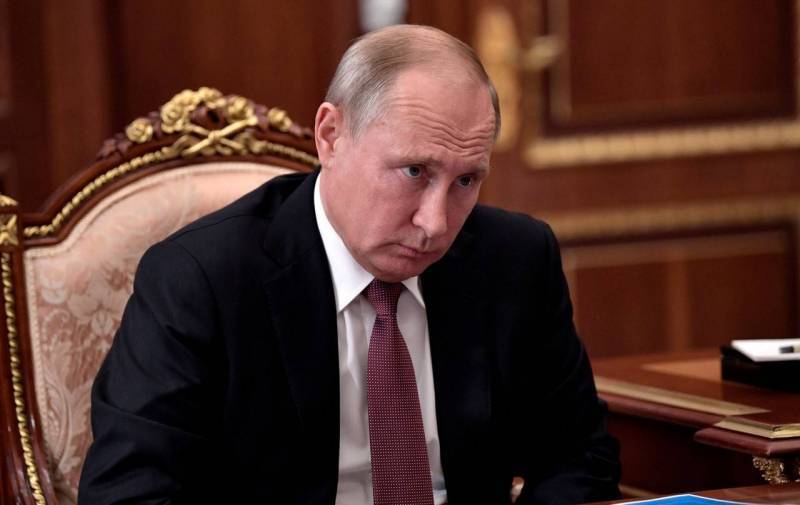 In this post, we will continue our reasoning on the topic of a hypothetical "decapitation" US strike on Russia, a possible military response to which was announced not by anyone, but personally by Russian Foreign Minister Sergei Lavrov. It is obvious that the era of Moscow's naive and trusting relations with "Western partners" has already ended irrevocably and it is time for the domestic "elite" to grow up.


The problem of national security, emanating from the threat of simultaneous destruction of the entire military-political leadership of the country by pinpoint strikes by the enemy, is being solved differently in the United States and the Russian Federation. Since the days of President Eisenhower, who was a combat general, there has been a so-called shadow cabinet in the United States. This is not a secret world government from various conspiracy theories, but a completely officially approved list of officials who should take over the government in the event of the death of the president and his cabinet of ministers. At the same time, security measures are taken such that the "shadow government" is never simultaneously in the same city, and even more so in the same premises with the official leadership of the state. In the event of the death or serious illness of the president, there is also a vice president. At the same time, in the United States, management functions were transferred from New York, which remained simply the leading financial center, to Washington.

In other words, it is almost impossible to decapitate the “hegemon” with some unexpected preventive strike. How strikingly this differs from Russia, where in one city, Moscow, both financial and political centers of the country, at the same time, both the President of the Russian Federation and the Prime Minister with the entire government are on a permanent basis, which, we recall, according to the law, in which case, should become acting. And this thing is...

Recall that from 2000 to 2004, the Russian Prime Minister was such a character as Mikhail Kasyanov. According to the law, in the event of the death or inability to exercise their powers of the President of the Russian Federation, they would have passed in those years to Mikhail Mikhailovich before the announcement of the results of early elections. You can easily imagine the consequences for the country. With prime ministers as “understudies” it is generally very difficult, because in the domestic political system the president prefers to choose his partner not political, but technical figures. How such a person will show himself in a crisis situation is absolutely unknown.

That is why I would like to discuss the question of whether a vice-president is needed in modern Russia or not.

This political institution originated in the United States as a variant of the "intra-elite" consensus. Initially, this post was held by the candidate who received the second result during the elections. In 1796, the president and vice president were in conflict, leading to the 1804 amendment to the US Constitution that introduced a separate vote for presidential and vice presidential candidates.

For a long time, the post of vice president was considered honorary, but of little significance. It is known that Senator Harry Truman did not want to take it at all. The powers of the vice president are not described in the Constitution and are determined by the president of the country himself. However, after the end of World War II, everything changed dramatically. Since 1949, the vice president began to take part in meetings of the Cabinet of Ministers and the National Security Council, to lead meetings of the US administration in the absence of the president, to assist him in strengthening the ties between the White House and Congress, and to travel abroad on behalf of the president.

Since 1967, the 25th Amendment to the Constitution has enshrined the provision that in the event of a vacancy in the presidency, the vice president is proclaimed the "full president" of the United States. This means that the American vice president, in the event of the president's resignation, impeachment or death, will perform all his functions until the end of the mandate. In this case, there is no talk of early elections.

Also, the post of Vice President of the United States is a real forge of personnel for future presidents. These include John Tyler, Millard Fillmore, Andrew Johnson, Chester Arthur, Theodore Roosevelt, Calvin Coolidge, Harry Truman, Lyndon Johnson and Gerald Ford. At the same time, Gerald Ford became president of the United States without going through the national election procedure at all. He was nominated vice president by Congress in 1973 and became president after Nixon's resignation in 1974. John Adams, Thomas Jefferson, Calvin Coolidge, Lyndon Johnson, George W. Bush, and the current "Sleepy Joe" Biden have subsequently become US Presidents.

In general, the post of vice president in the United States is a powerful springboard through which you can jump to the very top. Candidates for the presidency and vice presidency in America come together, being members of the same team and reinforcing each other. It is also easy to see that the role of the vice president increased significantly precisely after the end of World War II, when the atomic bomb was created and there was a risk of receiving a decapitation blow with weapons of mass destruction.

In the USSR / RSFSR

In our country, this political institution had a completely different fate. The post of vice president was first introduced in 1990 at the end of the existence of the USSR. With his help, Mikhail Gorbachev tried to save his faltering popularity and gain additional support from the “elites”. Shevardnadze, Primakov, Stankevich, Yavlinsky, Ryzhkov and Nazarbaev were considered for this role, but to everyone's surprise, Gennady Yanaev became the one, who passed the election procedure only on the second attempt.

Ironically, it was Yanaev who played one of the leading roles in the attempt to overthrow Gorbachev on August 19, 1991, when the creation of the State Emergency Committee was announced. The first president of the USSR, isolated in the Crimea, was declared seriously ill, Yanaev began to fulfill his duties. Who knows what path the history of our country would have taken if the "putschists" had had more political will.

After the failure of the GKChP, Yanaev was removed from the post of vice president, which remained vacant until the end of the Soviet Union. In the RSFSR, the post of vice president was introduced at the request of Boris Yeltsin, who was then popular and wanted to acquire an ally, luring him from the camp of competitors. They eventually became the leader of the faction "Communists for Democracy" Alexander Rutskoi. Together, they won a landslide victory in the general election in 1991, but then relations within the tandem began to deteriorate sharply.

Rutskoi criticized Gaidar's liberal reforms and the corruption of Yeltsin's appointees. Then the famous meme about "11 suitcases of compromising evidence" appeared. In 1992, Yeltsin transferred the troublemaker to oversee agriculture, which since Soviet times was considered the deepest disgrace. By 1993, the vice president was consistently removed from all levers of power and dismissed, but neither Rutskoi himself, nor the Supreme Council, nor the Constitutional Court recognized the resignation decree as legal. The vice-president, with the assistance of the Constitutional Court, declared Yeltsin removed from office for attempting a coup d'état and himself became acting president. He even called on military pilots to "bomb the Kremlin." All this ended in a real "bloodbath", from which Yeltsin and his Family emerged victorious. After that, in 1993, a new Constitution was adopted, in which there was no longer the post of vice president, and it is still not in the Constitution of the Russian Federation.

The significance of this legal institution can be interpreted in different ways, depending on political views. However, in fact, at two critical points in Russia's history, it was the Vice President who opposed the decisions that eventually brought us all to where we are now. Is it possible to return the post of vice president in the modern Russian Federation?

At the moment, more no than yes. The threat of political competition in the Kremlin may be taken more seriously than the prospect of a decapitating blow to Moscow. The request "at the top" for this post will arise exactly when the real opposition gains real strength, with which it will be necessary to somehow agree on the division of spheres of influence. However, under certain circumstances, the institution of the vice-president can be used by the current government itself as one of the fallback options for “transit”. To do this, it will be enough to make another amendment to the Constitution of the Russian Federation, appoint a trusted person to the post of second person in the state, and then hand over the helm to him without unnecessary worries.
Reporterin Yandex News
Reporterin Yandex Zen
11 comments
Information
Dear reader, to leave comments on the publication, you must sign in.