“Fedor” in orbit: why Russia needs a robot-astronaut 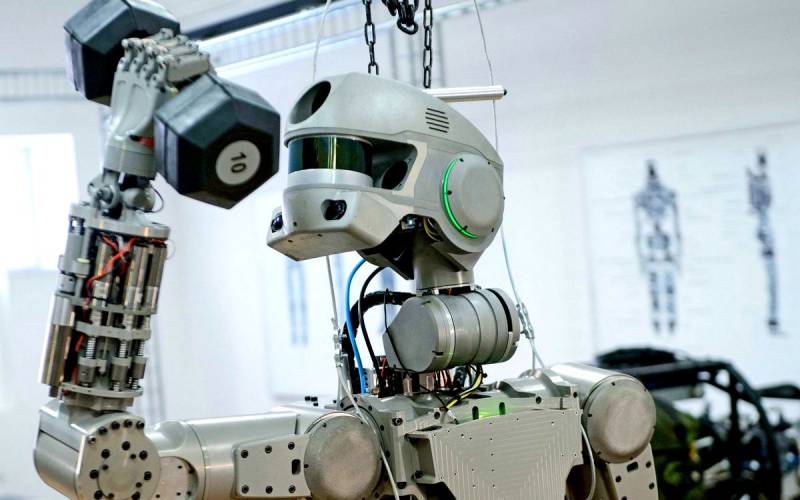 Rise of the Machines


Over the past few years, the creators of robots have made several technological leaps at once, which without exaggeration can be called a revolution. If you do not believe me, you can watch the recording of the DARPA Robotics Challenge-2015 contest organized by the Pentagon. The robots represented there (and there were many of them) looked frankly ridiculous and often could not perform the simplest actions, for example, to open the door. Oddly enough, recent progress has not been directly related to military affairs: the same American marines, having tested, did not see the pluses in the use of four-legged robots such as LS3. We recall that they wanted to use them for carrying goods. 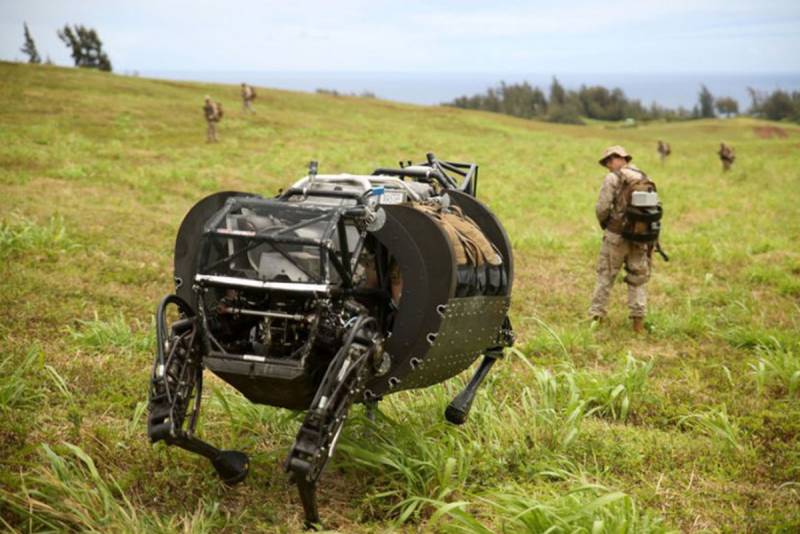 This failure did not stop the creator of the robot in the person of the American company Boston Dynamics, which in 2017 showed a video with the Atlas humanoid robot doing a somersault. And in 2018, the Boston demonstrated a running Atlas, the movements of which were almost indistinguishable from human ones. These are, of course, colossal achievements. Will Russian developers be able to adequately respond to their American counterparts?

In general, the concept of a robot is very extensible: a UAV can also be called a robot. Moreover, a new Uran-9 complex should be added to this category, which, one might say, brought Russia into the lead in terms of creating ground-based combat robotic systems. Simply put, this is a remotely controlled fire support combat vehicle. But we are now specifically interested in anthropomorphic robots. That is, at least partially similar to people. Such as the aforementioned Atlas.

Back in 2015, employees of the TsNIItochmash enterprise showed Russian President Vladimir Putin a robot avatar that is capable (in any case, such a conclusion can be drawn from the photographs presented) to ride a quad bike and use firearms. For firing, a manipulator arm is used. The creators themselves then announced the presence of certain prospects, but, in fact, it was just a demonstration. And judging by it about the real potential is difficult. 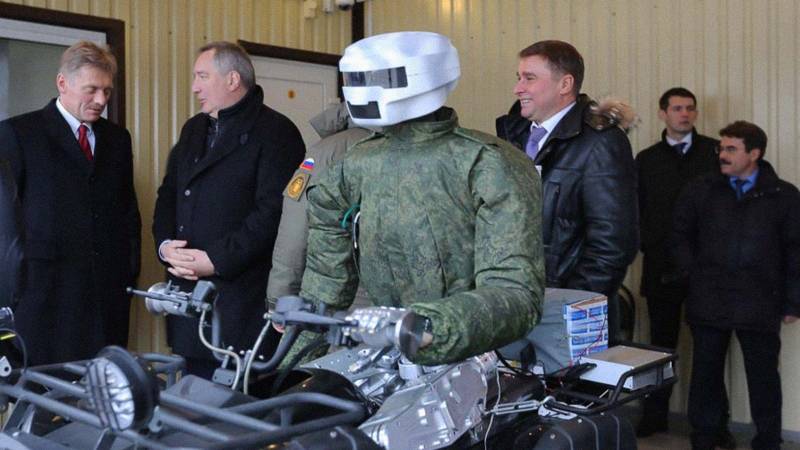 Anthropomorphic robots have not yet been seen as soldiers: they are complex, expensive and not reliable enough. The idea of ​​creating a robot-astronaut is much more actively promoted. Earlier, NASA had already sent a humanoid Robonaut to the ISS: over time, he received not only arms, but also legs. It was believed that the robot will help astronauts in their daily work both inside and outside the station. But the first pancake was lumpy. It turned out to be very difficult to bring the Robonaut to a healthy state. It was all the more difficult to do this in orbit.

Such difficulties did not frighten Russian engineers. Previously, the SAR-400 robot cosmonaut was created, and then the improved version - SAR-401. It was on the basis of these developments that a new “Fedor” was created, which was seen as a multifunctional robot - useful, in particular, for rescue operations. Work on FEDOR (Final Experimental Demonstration Object Research) is conducted by the Android NGO technique". The robot received a modern voice control system. Fifteen thousand parts were used to create the prototype, of which approximately half were Russian. Fedor uses an operating system developed in Russia based on Linux. The power of the robot is twenty horsepower (13,5 kW). Height is 180 cm, depending on the configuration, its mass can reach 160 kg. "Fedor" is able to perform functions autonomously for about an hour, and in addition, can act as an avatar. Moreover, it can be controlled at a great distance using satellite communications. You can charge the robot through a power outlet. 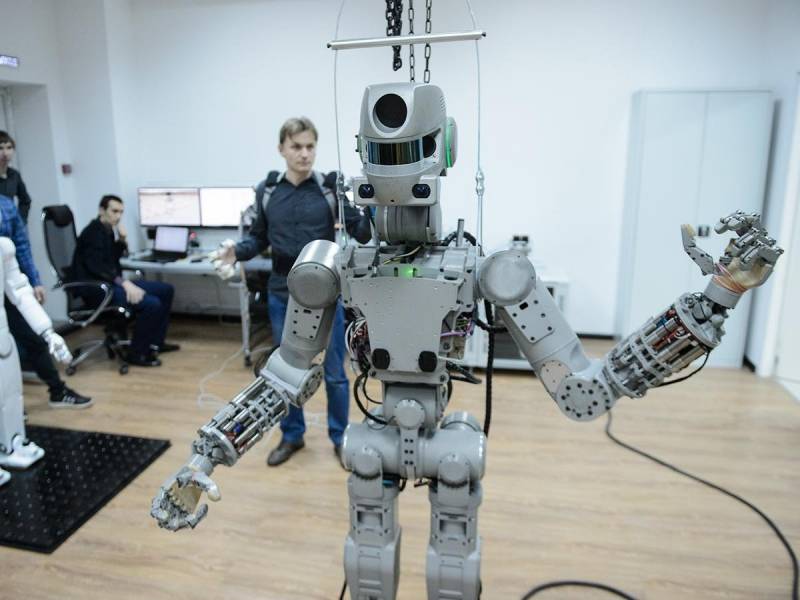 Quite spectacular photo and video tests, of course, fueled interest in the development. As of December 2016, the robot was able to:

- Sit on the longitudinal and transverse twine;
- Make head turns;
- Move around on all fours;
- Crawl in a plastubsky;
- Get up after a fall without the help of a person;
- Move up the stairs;
- Get in the car;
- Drive a vehicle (copying and autonomous modes);
- Work with power tools.

This is not all that the robot is already capable of. However, a specific goal is needed. In 2016, it became known that on the basis of FEDOR they intend to build a new robot for the ISS. The developers of the improved version are the already mentioned Android technology, as well as the Energia rocket and space corporation. Now the former general director of RSC Energia Vladimir Solntsev then stated that involvement in the project to create a space robot would allow Energia engineers to get a completely new experience.


It can be assumed that the financial and technical problems of the space department of the Russian Federation, which made themselves felt with new force, put an end to the new development. However, it is not. In the summer of 2018, RIA News reported that a team of two Fedorov could be sent to the ISS in the Soyuz unmanned spacecraft in August 2019. And in September 2018 it became known that a demonstration sample of "Fedor" will be transferred to "Roscosmos". Then it was reported that it was decided to send him into space on the promising spacecraft "Federation". The robot will be seated in the co-pilot's seat, he will not control the ship. In the future, they want to use Fyodor to support astronauts during work in outer space. To do this, they intend to install special batteries on the outer surface of the ISS, with which the robot can be recharged. In the distant future, they want to use the new Russian development to fly around the Moon, although as we know, Russia's lunar ambitions went "under the knife" due to financial, technological and political problems and contradictions. Nobody completely abandoned them, but the timing of such missions has noticeably shifted. 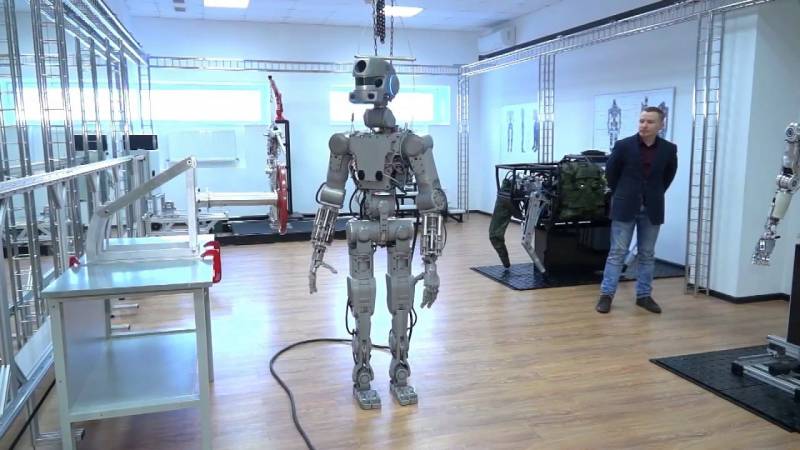 The American "Robonaut" clearly showed that in the cramped conditions of the ISS, a large humanoid robot is not the best solution. In any case, at this stage of technology development. Much more useful for working in orbit is a robotic arm, such as the Kanadarm. This, recall, is a large “hand” that can be used for a variety of purposes. We are no longer talking about the fact that after the abandonment of the ISS station (presumably the mid-20s), Russia will no longer be able to take astronaut robots. The domestic manned space program itself will hang in the balance. After all, Roscosmos is systematically being squeezed out of the project to create a new lunar orbital station. At the same time, there is simply no real alternative for manned flights now. And in such conditions there will simply be nowhere to fly the “Unions” and the “Federations”, at least with the Fedor on board, even without him.

In general, the use of a large anthropomorphic robot to solve any practical problems looks pretty "populism." Now even the world-famous Boston Dynamics cannot attach her brainchildren, although it makes them admire. In this regard, FEDOR looks like a kind of investment in the future: that is, the basis for possible new areas of Russian robotics.
Ctrl Enter
Noticed oshЫbku Highlight text and press. Ctrl + Enter
We are
The Americans taught the robot elements of parkour
Robots are preparing a revolution
Reporterin Yandex News
Read Reporterin Google News
Ad
We are open to cooperation with authors in the news and analytical departments. A prerequisite is the ability to quickly analyze the text and check the facts, to write concisely and interestingly on political and economic topics. We offer flexible working hours and regular payments. Please send your responses with examples of work to [email protected]
1 comment
Information
Dear reader, to leave comments on the publication, you must sign in.