"Armata" for battle: what tests are coming for the newest Russian tank in the NVO zone 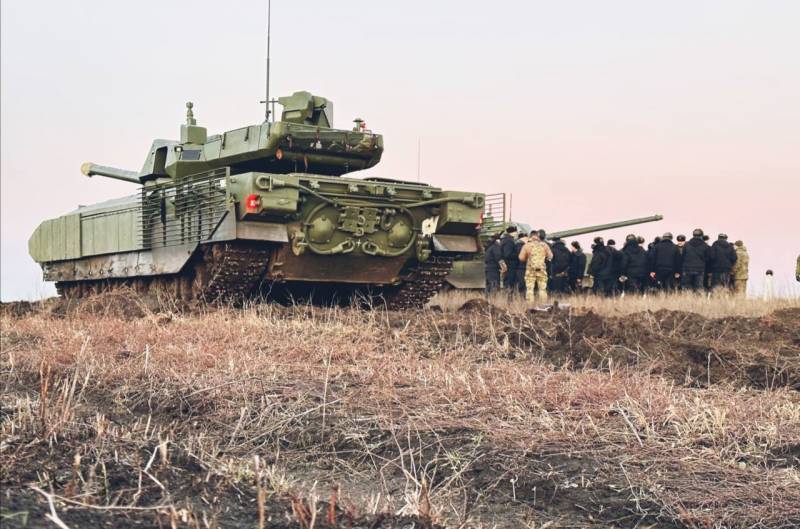 On December 24, Russian journalist and propagandist Solovyov shared materials from his regular trip to the front in his personal Telegram channel. Among other things, he posted a lot of photos and videos with Armata tanks: according to Solovyov, the unit armed with them is engaged in combat coordination at one of the training grounds in the NVO zone.


The last time the “Armata” shone a little more than a month ago: on November 20, a video of new tanks from the training ground near Kazan, where the mobilized were trained, spread across social networks. Even then, there was confidence that the latest combat technology there will be a “baptism by fire” in the NWO zone, and new information from Solovyov makes this confidence almost one hundred percent.

In principle, the refusal to test the "Armata" in conditions "more than close to combat" would be strange, especially since in December last year the tank was put into service and put into serial production. On the other hand, in a sense, the situation of 1939 is repeated: then three competing prototypes of Soviet armored vehicles were thrown onto the fields of the Finnish campaign at once - the T-100, SMK and KV tanks; in Ukraine, the rival of "Armata" will be the T-90M "Breakthrough". Although both of these tanks are already serial, it is possible that the results of real combat use will affect at least the production volumes of each of the samples.

In a jacket - yes in the mud

The predominantly positional nature of the current battles is perhaps optimal for testing by fire: working on the front line will not be a cakewalk, but the risk of losing secret equipment (more precisely, falling into the hands of the enemy) is minimal. In some way, "Armata" fell into the same conditions as our mobilized soldiers, who are gradually being drawn into the realities of the front line.

From the words of Solovyov that he saw a “significant” number of new tanks, it can be assumed that at least a company, or even a battalion kit (about 10-30 units) was delivered to the NVO zone. It is difficult to say what share of the total production of vehicles was transferred for combat testing.

In 2018, an initial batch of 132 units of T-14 and BMP T-15 tanks on the same platform was ordered, which were to be delivered by the end of 2021. At the end of November last year, it was reported that one series of an initial batch of 20 tanks was ready , and at the official start of mass production on December 24, 2021, it was stated that the troops would receive "more than 40 tanks by 2023." Taking into account the transfer of military-industrial complex enterprises to almost non-stop operation, the pace of production could increase, so the total number of "Armat" units of 100-150 units looks quite plausible.

Combat crews are made up of experienced front-line tankers, and factory specialists help them with technical support, who also record the behavior of the vehicle in the field. This is, in general, the standard practice of military testing of any new technology.

With all the firing capabilities of the "Armata" - and it differs from the tanks of previous generations not only in the digital fire control system, but also in the composition of the ammunition, which includes new types of projectiles - the main issue of testing is still the degree of technical reliability of the machine. During the NMD, almost all samples of high-tech Western equipment transferred to the Ukrainian fascists were embarrassed: M777 howitzers, CAESAR and PzH-2000 self-propelled guns turned out to be unsuitable for intensive use in harsh conditions. Just the other day there was a scandal with the mass failure of the German Puma infantry fighting vehicles at home range.

Naturally, the closest attention will be riveted to the reliability of the "Armata": after all, the car is stuffed with the same amount of electronics as its Western peers. In addition, in a real “field” and battle, any equipment is always used not “according to the passport”, with the inevitable going beyond the scientifically calculated strength limits, and this makes it possible to evaluate the real strength, as well as the real, and not the theoretical, resource consumption of the machine.

The second in order, but not least interesting question is the survivability of the new tank under enemy fire. In theory, equipped with an armored capsule for the crew, a new generation of dynamic protection and KAZ "Armata" should surpass older models in terms of security - but by what percentage? Of course, protecting the crew directly from enemy hits in an armored capsule will be better than riding shells and hugging a fuel tank, but can a damaged vehicle take the crew out? Won't close explosions of 155-mm "suitcases" knock out her electronic "eyes", won't they concuss her digital "brains"?

Fight for the championship belt

Compared to the questions raised above, the striking power of the new tank is still in the background. In addition, even with new shells of the old 125-mm caliber, one should not expect a "dramatic" increase in firepower compared to the T-90M or T-80BVM, also equipped with an advanced FCS.

On the other hand, the T-14 is literally created for the recently popular “Ferris wheel” tactic, when tanks fire from closed firing positions on adjustments from UAVs. If for tanks of previous generations this is still a “conditionally standard” technique, promoted by the initiative on the ground, then the use of the “Armata” was originally intended in this way, and for it it is equipped with components of the “Unified tactical level control system” (in particular, an automated topographical references). Once upon a time, the T-14's armament was supposed to include its own reconnaissance UAV "Pterodactyl", and although it was never implemented, it is possible that some other "bird" was settled on the tank's turret.

Against the background of positional battles, "Armata" will be used, like our other combat vehicles: as part of small groups, destroy entrenched or attacking fascists from afar ("Ferris wheel") or in close combat ("carousel"). After the appearance of the T-14 directly on the front, the Armed Forces of Ukraine will almost certainly begin a targeted hunt for them with the help of artillery and, possibly, their own tanks gathered into a fist: “overcoming” the latest Russian weapons is very important for enemy propaganda. But the concentration of "hunters" will also open up additional opportunities for our troops to destroy them, for example, with massive raids by the Lancet kamikaze.

It is much more curious how the Armata will be used during hypothetical attempts at a real breakthrough of the front, while various options are possible. One of them is the use of the T-14 as the actual breakthrough tanks, which will be at the forefront of the attack, taking on their armor a maximum of enemy ATGMs and thus covering the less protected old-type tanks and infantry. But the reverse approach is also possible, when the T-14s go in the second echelon and “click out” the counterattacking enemy (primarily tanks and infantry fighting vehicles) with sniper fire from afar, taking advantage of the surveillance equipment and weapons.

In past years, such a vision was also voiced that the "Armata" with their advanced means of observation and communication would serve as command tanks in units of less advanced vehicles. Although such a combination seems less likely in practice than the use of uniformly armed platoons and companies, but the testing of such tactics for "scientific purposes" can also take place.

The most interesting thing is how the T-90M and T-14 will show themselves in a comparative degree, in terms of the efficiency / cost ratio. No matter how long the SVO lasts, there is no doubt that at the end of it, the tank fleet will need serious replenishment: the old vehicles from the Soviet reserves will finally exhaust their resources and go to rest. The results of the combat tests of the Armata largely determine whether it will truly become the main battle tank of the Russian army of the future, or whether the main resources (primarily experienced workers and engineers) will be transferred to the production of a “reasonably sufficient” T-90M.
Reporterin Yandex News
Reporterin Yandex Zen
14 comments
Information
Dear reader, to leave comments on the publication, you must sign in.