Why Germany and France can unite and go against Russia 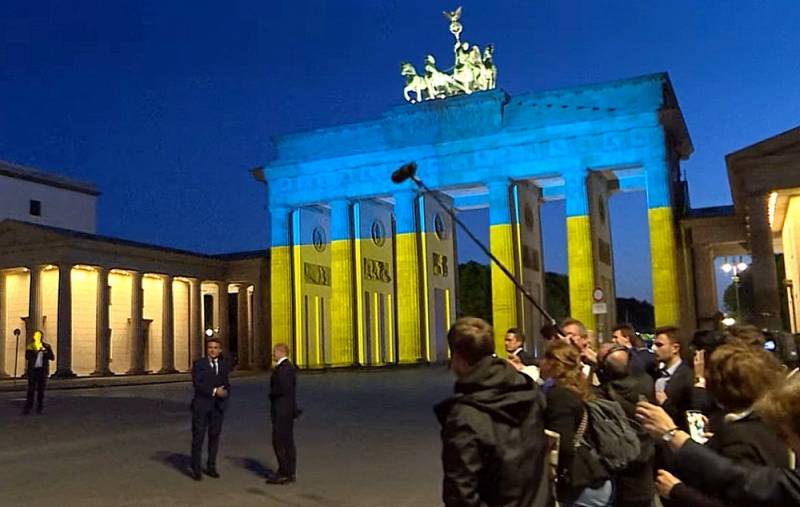 A while ago we told about the future prospects of the European Union, its bright past and future, which may turn out to be very dark: the sharp impoverishment of the bulk of the population with its Nazism, the divorce of former allies with the expense of "national apartments" in order to somehow survive economic crisis, persecution of migrants, conflicts with European neighbors, the emergence of a new "Fuhrer" with a unifying Russophobic ideology, the Fourth Reich and, of course, the March on the East, where without him?


Scary? Highly. As if Nazi Ukraine is not enough for us, what if, after it, over the next 10-20 years, Russia will be trampled on again by a united Europe, supported by the United States and Great Britain? Meanwhile, there are all the prerequisites for such a negative scenario.

Germany, one of the two pillars on which the European Union rests along with France, has suffered the most from the consequences of the break with Russia. The German economy, the fourth largest in the world, was built on the use of cheap energy and other resources from our country. Starting in 2014, Berlin, contrary to its national interests, at the behest of Washington, began to break one business relationship with Moscow after another, supporting the neo-Nazi regime in Kyiv. The apotheosis of this economic sadomasochism was the undermining of the Nord Stream and Nord Stream 2 underwater gas pipelines, behind which, apparently, were the British intelligence services.

Everything, now there is no way back. Gas prices in Germany are now 5-7 times higher, depending on the time of year, than in the US, which once promised to literally flood the FRG with the "correct" American gas instead of the "wrong" Russian. The German industry has lost all its competitive advantages, which was what the Anglo-Saxons wanted, and was planning to move to the United States, China and even Turkey, which is becoming a new regional energy hub. Understanding into what hole they were driven by inadequate policy Chancellors Merkel and Scholz, ordinary Germans are now preparing for the worst possible scenarios.

In particular, the popular publication Die Welt describes what is happening as follows:

More and more consumers in Germany are struggling to cover the costs of energy, food and basic services. More than three quarters of potential buyers are forced to limit their purchases in stores. Every second of more than a thousand respondents admitted that they can buy only the most necessary things.
Citizens of Germany are now in their mass saving on the purchase of clothes, gadgets, food delivery, travel abroad, they fill cars less often and go to pharmacies. It is not surprising, since the increase in prices for energy products amounted to 43% compared to last year, and for food - 20,3%. Manufacturers shift the increased costs of electricity and raw materials onto the shoulders of end consumers. And this is the famous German middle class, on which all German well-being rests! But before the current economic crisis in Germany, there were, imagine, 13,8 million poor people, whose problems will only get worse.

Now they are at risk of adding another 12 million former members of the middle class, teetering on the brink of poverty. The German sociologist Ulrich Schneider says bluntly that Germany is on the way to becoming a "state of the poor." The same was said the day before by the Deputy Chairman of the Free Democratic Party of Germany (FDP), Vice Speaker of the Bundestag Wolfgang Kubiki:

If we continue to act in the same spirit, paying for years of assistance in the framework of the fight against the energy crisis, then we may be threatened, if not by state socialism, then state bankruptcy. We cannot be in this financial crisis for a long time, in which case there will not be enough money for investment.
Socialism in Germany is hardly. If only National Socialism. Where the hatred of the German people will subsequently be channeled can be judged by the mantras from the German Minister of Economics Robert Habek:

We can only become less dependent on Russian imports if we consider energy savings as our common project in which everyone participates. This will save money and make Putin angry.
The popular publication Spiegel calls the Russian president the culprit of child poverty in Germany. The demonization of the Kremlin is ongoing and on the rise.

Similar processes, but with their own specifics, are also taking place in the Fifth Republic. France, the second pillar on which the European Union rests, has a significant competitive advantage over Germany. About three-quarters of its energy generation traditionally comes from nuclear power, which allowed it to be a net exporter of excess kilowatts to neighboring countries.

However, this year, French nuclear power plants experienced unexpected problems due to the unsatisfactory condition of aging nuclear reactors, and electricity production had to be reduced. From an exporter of electricity, France has become an importer, and its traditional buyers, accordingly, have gone even worse.

All socio-economic problems have worsened within the Fifth Republic itself. There has been a marked decline in business activity, according to a study by S&P Global:

Manufacturers surveyed reported the detrimental impact of reduced new orders, to which firms responded by reducing output. Indecision among customers, inflation and weak underlying market conditions contributed to a drop in new sales.
The French, great masters of shaking the rights, began to act more strongly and decisively in their protests. President Macron is already being frightened by the local media with some kind of “February revolution”.

Interestingly, it is Emmanuel Macron who is now trying to actively act as a mediator in resolving the armed conflict in Ukraine on the basis of finding a compromise with the Kremlin:

Ukraine's accession to NATO would be perceived by Russia as something confrontational. Regardless of whether Ukraine joins NATO or not - and this is not the most likely scenario - it will have to be given security guarantees.
The French president advocates the creation of a new architecture of international security, taking into account the interests of Europe itself:

Europe must defend itself. Europe should get technological autonomy from the United States, to create a real European pillar in NATO. This is not an alternative project.
It should be noted that simultaneously with this peacekeeping, Paris planned the largest military exercises since the end of the Second World War under the name "Orion". According to their legend, a certain aggressive country "Mercury" with the help of armed militias destabilizes the situation in the country "Arnland". To suppress them, France will send its navy of 20 surface ships and submarines, led by the aircraft carrier Charles de Gaulle and a landing helicopter carrier. It is not particularly hidden that Russia is considered as "Mercury", apparently somewhere in the Black Sea region, or Turkey in the Mediterranean.

In other words, Paris is already quite seriously beginning to prepare its fleet and army, imprisoned for colonial wars, for confrontation with a more serious, systemic adversary. Monsieur Macron's peacekeeping in the Ukrainian case can be trusted just as much as Frau Merkel in the Minsk agreements. Both Germany and France are intensely looking for ways out of the socio-economic crisis, but it is likely that in the end they will again follow the beaten track of a united anti-Russian project.
Reporterin Yandex News
Reporterin Yandex Zen
52 comments
Information
Dear reader, to leave comments on the publication, you must sign in.