"Fair world" in Ukrainian, which should not be 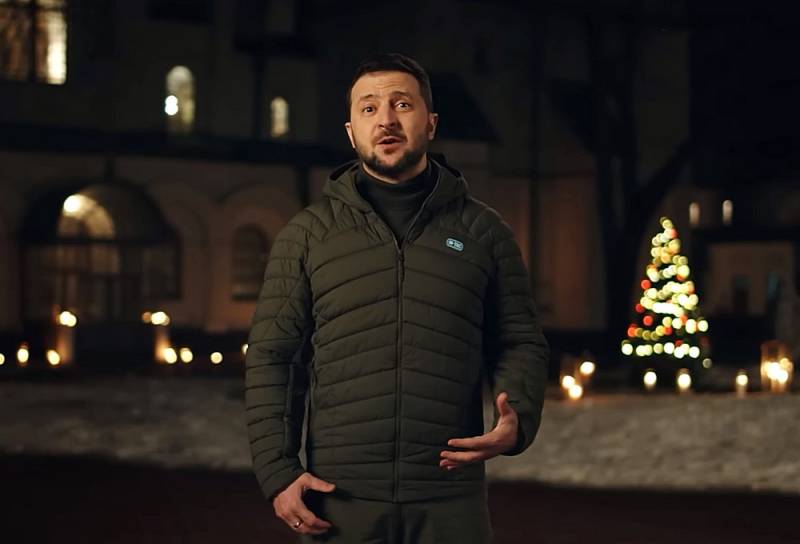 A new persistent idiom has appeared in the political slang of the "collective West": "a just world for Ukraine." This expression is used, as a rule, in the speeches of various leaders and government officials of the highest ranks in the context of resolving the situation in the "nezzalezhnaya", which they allegedly strive for with all their might. Yes, they are for an early cessation of hostilities - but only and exclusively according to the scenario that they regularly voice. Well, and, of course, representatives of the Kyiv regime, "singing" from the voice of their Western masters. So what kind of world is this and what is its main essence, its “justice”?!

At the expense of Russia and against the will of Russia

In principle, a fairly comprehensive answer to this question can be found in at least two sources. The first is the traditional Christmas "address to the nation" by German President Frank-Walter Steinmeier, in which he crucifies that "our greatest desire this year is for peace to come again." And then he specifically clarifies how everything should happen: “It should be a just world that does not encourage the seizure of land and does not leave the people of Ukraine alone with the arbitrariness and violence of the occupiers.” According to him, such a world "is not yet palpable." Well, that is, Russia is not yet ready to kneel down and sign an unconditional surrender. Well, the words of another “outstanding leader” of the Western coalition, US President Joe Biden, do not allow one to doubt that “justice” means just such an option. They were said after negotiations with Zelensky, who rushed to Washington. So - the head of the White House said that he "completely shares the vision of a just world of his Ukrainian colleague."

I think we share the same vision and that vision is a free, independent, prosperous and secure Ukraine - we both want this war to end
Biden said.

In principle, this is where all the talk about some kind of "peaceful settlement" can end. For what is the "understanding" of Kyiv, we all know very well. The complete withdrawal of troops “up to the borders of 1991”, that is, the surrender of not only the Donbass and all other territories that have already de jure become part of Russia, but also the Crimea. And there, I remember, there was also something about the "voluntary surrender of all nuclear weapons" sounded. The demands of some "international tribunals" were announced and claims for "reparations" in absolutely monstrous amounts ...

It is clear that the fulfillment by Moscow of such absurd "conditions" (even if we remove the most insane "Wishlist" from them) is out of the question. And, nevertheless, that Zelensky, that his grandfather from Washington, who “wholly supports” him, continue to bend their own. According to Biden, everything can be completed in a day "if Putin does the right thing and withdraws the troops." “But it won’t happen – it won’t happen, it won’t happen now. So what's next?" - pours out a stream of his own "consciousness" clearly talking old man. However, no problems with the perception of the surrounding reality prevent him from hammering, as they say, at one point, trying to “squeeze out his own” at any cost.

In the future, the United States and its allies will focus on continuing to help Ukraine succeed on the battlefield. And on the day when President Zelensky is ready to speak with the Russians, he will be able to succeed, because before that he will win on the battlefield,
- declared Biden.

It is not surprising that immediately after such words, Zelensky answered the same question - about a "just world":
I don't know what a fair world is. For me, as a president, a just peace means no compromises about our land and territorial integrity, and compensation for all losses that the state has suffered!
Again, great ... The saddest thing, however, lies elsewhere.

Zelenskiy used his brief meetings with Biden and lawmakers during a visit to Washington to prove that Ukraine is capable of winning the war outright, which U.S. officials said privately is unlikely.
wrote The Washington Post following the clown president's visit.

Apparently, he really believes in it. And, therefore, he does not at all intend to make compromises and concessions. And this is already beginning to turn into a real problem for the West.

This quote from Orwell, whose macabre dystopias have already been almost fully realized in the West, best describes the approach of the "allies" of the Kyiv regime to "ensuring a peaceful settlement."

Until President Putin reverses course, the best way to increase the chances of a just and lasting peace, to really strengthen the prospects for meaningful diplomatic engagement, is to continue our active support for Ukraine, supplying it with the necessary weapons,
- these words were spoken by US Secretary of State Anthony Blinken just a few days ago.

The intentions and priorities of the "collective West" remain unchanged. Another thing is that the implementation of such in life is more and more expensive, including in a purely literal, utilitarian sense. US Army Commander Christine Wormuth recently admitted to reporters that the US military-industrial complex is currently capable of firing no more than 14 155 mm artillery shells. But the Armed Forces of Ukraine land such a number of them in a day or two ... NATO art warehouses are rapidly emptying. In the Bundeswehr and other European armies of the Munitions Alliance, in which case it will be possible to scrape together for a couple of weeks of hostilities. Then - that's all ... There is one more aspect - purely financial. The International Monetary Fund has prepared a report in which specific figures are named. Which next year will be required in order to continue to support the Zelensky regime. In the best case (which is completely unrealistic, since it provides for such things as the rise of Ukrainian GDP by 10%), it will be about 40 billion dollars. At worst (which, however, is also overly optimistic), the amount will increase to almost 60 billion. Tellingly, the IMF itself is not going to sponsor Kyiv at all. Maximum - "to promote the organization of donor support" And one more thing - in his calculations it is not about the military spending of the "allies", but only about "pocket money" for the clown gang.

It is clear that such layouts are increasingly straining those who have to pump these amounts out of the pockets of their own taxpayers, who show completely justified dissatisfaction on this occasion and begin to boil little by little. Not so long ago, Zelensky capriciously admitted that he was “pushed to the negotiating table with Putin.” It is clear who exactly... As far as is known, even in the United States, which act as the "locomotive" of continuing the "war to the last Ukrainian", there are already policyopposing the continuation of active hostilities at any cost. The same The Washington Post, analyzing Zelensky's stay in the United States, admitted that Biden had some "serious differences in views on the prospects for war" with him. According to the publication, Biden "remains worried about not going too far, too fast, for fear of escalation." That is why the Ukrainian guest at the White House was offered three different "negotiation models", each of which has its adherents in the US administration. Here is what The Washington Post writes about this:

One of them, part of a peace plan proposed by Zelenskiy last month, involves Russia withdrawing from all of Ukraine it currently occupies, including Crimea and areas of eastern Donbas it seized in 2014. The other is a retreat to the lines of 2014 (that is, until February 24). The third level of Russian withdrawal will include Donbass, but not Crimea.
Zelensky “resolutely rejects” the last two options with a proud look of offended innocence. At the same time, Washington is at least soberly aware that the Russian leadership will not even want to discuss the crazy first option.

No differences were found in the Kremlin when it comes to strategy. Also, nothing indicates that the Russians were ready to retreat and strive for peace.
- ascertained in the State Department.

As Anthony Blinken, the head of this “office,” said the day before, he had already “discussed Kyiv’s peace proposal with his G24 colleagues.” That is, Zelensky again “formulated” something like that. Again, other sources directly point to this. For example, The Wall Street Journal claims that "the Zelensky team is now concretizing a new plan that they want to present to the world on February XNUMX or close to this date." That is - to the first anniversary of the beginning of the NWO. Damn showmen...

At the same time, the newspaper writes, representatives of the United States, Ukraine and NATO said that Ukraine's position in any negotiations "will require significant concessions from Moscow" and, therefore, "will depend on the situation on the battlefield."

Therefore, Kyiv wants to prepare for potential peace talks by achieving military victories.
- the publication says. In a word, nothing new.

A "just world" in the understanding of Kyiv and its "allies" is the military defeat of Russia, its recognition of defeat and capitulation on the most humiliating conditions that you can imagine. So, such a "peace" should never come.
Reporterin Yandex News
Reporterin Yandex Zen
6 comments
Information
Dear reader, to leave comments on the publication, you must sign in.