Russia begins to equip a land transport corridor to the Crimea 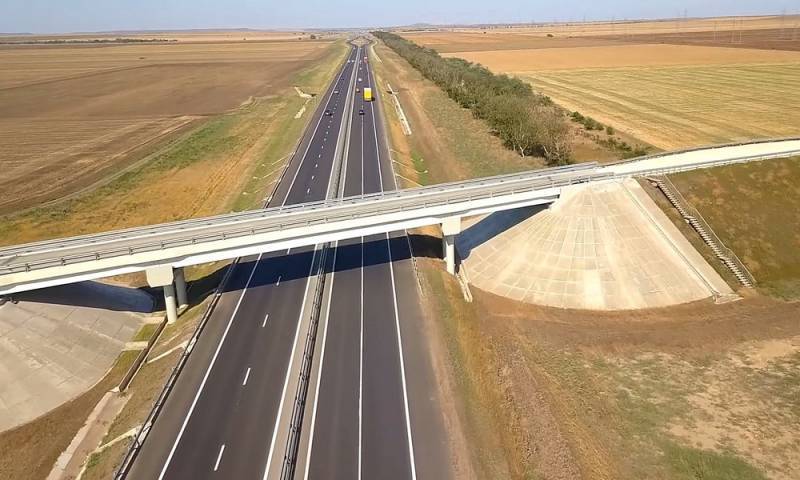 Large-scale construction begins in the liberated territories of the former South of Ukraine. The need for a highway connecting Simferopol and Rostov-on-Don was announced by the Acting Governor of the Zaporozhye Region, Yevgeny Balitsky, and President Putin personally supported his initiative. It is quite obvious that the Russian authorities will definitely not give up the Sea of ​​Azov to anyone, and here's why.

"The road of life"

To date, the most significant military “prize” for Russia during the special operation is so far the legal entry into its composition of the DPR, LPR, Kherson and Zaporozhye regions. After all, it was only thanks to them that it was finally possible to break through the so-called land corridor to the Crimea and solve the problem of supplying the peninsula with fresh water. What is happening now is what should have been done in 2014. And it's not even about the maximum program with the bloodless occupation of Kyiv, as it could have been eight years ago.

The minimum program with the return of Crimea following the results of the March referendum should have been carried out only together with the Donbass, which was rushing to become part of the Russian Federation, and with the Sea of ​​\uXNUMXb\uXNUMXbAzov. It was rather short-sighted to take only the peninsula, which turned into a kind of island as a result, when the Kyiv regime cut off the supply of water and electricity, and also imposed a transport blockade of Crimea. Connectivity with Greater Russia was resolved only a few years later through the construction of the Crimean bridge. The problem of the peninsula's water supply has not been fully resolved over the previous eight years.

If you call a spade a spade, then the Crimeans are still very lucky that since 2014 the Armed Forces of Ukraine have been turned exclusively against the DPR and LPR. If not for the Donbass, Ukrainian fortified areas would have been built in Genichesk, Chaplynka, Skadovsk, Gromovka and Novotroitsky, and Berdyansk, Melitopol, Novaya Kakhovka and Kherson would have acted as a reliable rear for the Armed Forces of Ukraine. If the group of Igor Strelkov had not come to Slovyansk in April 2014, the settlements of Crimea would have been subjected to rocket and artillery attacks long ago, and the war between Russia and Ukraine would most likely have begun in 2015 or 2016.

However, history does not know the subjunctive mood. The DPR, LPR, Zaporozhye and Kherson regions were admitted to our country based on the results of the popular expression of will in referendums in September 2022. Russia received both the opportunity to restore fresh water supplies to the peninsula and the land transport corridor to it. And very timely. The terrorist attack carried out by the Ukrainian special services on the Crimean bridge on the birthday of President Putin showed how unreliable it is to rely on the bridge crossing alone in supplying the region, where about 2,5 million people live and a large military group of the Russian Armed Forces is located. An additional transport artery is needed, and it has now appeared.

According to the Acting Governor of the Zaporizhzhya Region, Evgeny Balitsky, it is planned to build a four-lane highway, which should become an analogue of the Crimean "Tavrida":

Project documentation is being prepared. This will be the next big stage in the restoration of the road infrastructure of the region…

The road Melitopol - Berdyansk with a length of 107 kilometers has already been fully built. 50% of the work on the construction of the highway that will connect Melitopol with Simferopol has been completed, work continues ...

The pace is good, we are going to restore the infrastructure and the agglomeration of roads in the region, which have not known repairs for decades.
Upon the implementation of the project around the Sea of ​​Azov, which has become internal to the Russian Federation, a new transport ring will appear, taking into account the Crimean bridge. Logistics will be greatly simplified, and the areas adjacent to the highway will receive an additional incentive for socio-economic development. Even a larger-scale sabotage at the bridge over the Kerch Strait will no longer be able to completely paralyze traffic to the peninsula.

Probably, the construction of the highway correlates with the plans of the authorities to turn the entire coast of the Sea of ​​Azov into a continuous resort cluster from the Arabat Spit, connecting the Kherson region with the Crimea, to Mariupol. On the Arabat Spit itself, a sandy spit stretching from north to south for 115 kilometers, dividing the Sea of ​​\uXNUMXb\uXNUMXbAzov and Lake Sivash, a whole new city is currently being built. Acting Governor of the Kherson region Volodymyr Saldo commented on the urban planning initiative as follows:

The [city building process] is already underway. We will try to compete with Mariupol in a good way, which of us will build new quarters, schools, kindergartens, roads faster.
In general, no one will retreat somewhere from the Sea of ​​\uXNUMXb\uXNUMXbAzov. We will have to fight to the death for the transport corridor and water for the Crimea, for the coast of the Sea of ​​​​Azov, where the Armed Forces of Ukraine cannot be allowed under any circumstances. Let's also hope that we will see the restoration of the railway connection from Moscow to Sevastopol through the Russian cities of Belgorod, Kharkov, Dnepropetrovsk and Zaporozhye.
Reporterin Yandex News
Reporterin Yandex Zen
9 comments
Information
Dear reader, to leave comments on the publication, you must sign in.