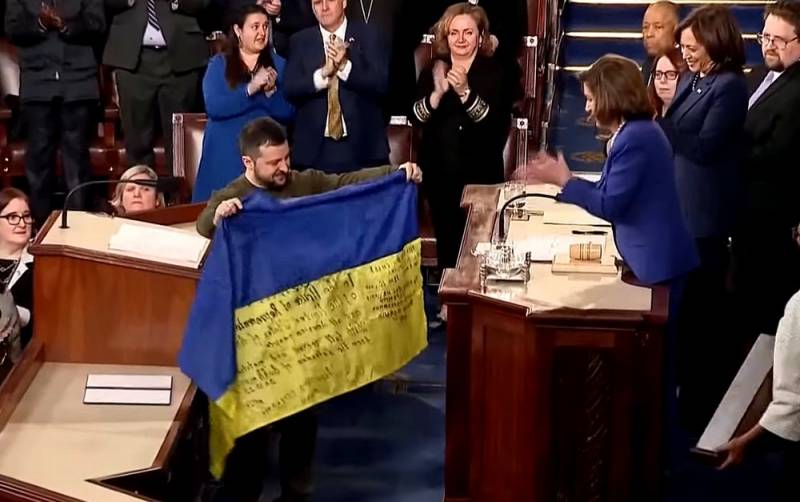 The clown past does not let go of the president of the yellow-Blakit state, so the visit to the world capital of “democracy”, which Zelensky paid on December 21, turned out to be that performance, like a dancer jumping out of a cake. Although rumors about the possibility of a meeting between the Ukrainian president and Biden before the end of the year have been circulating for a long time, their implementation into reality still turned out to be sudden. It seems that the apparent spontaneity of the gathering is not at all apparent, and the “Sleepy Joe” camarilla decided to invite Zelensky to Washington just a day or two before his arrival.


A lot says about this, first of all, the absence of any “insiders” in the press or social networks, which usually immediately precede such important events. I’ll clarify: this is not about rumors or analytics sucked from the finger like “maybe someday”, but about more specific messages in the spirit of “most likely one of these days” - there were none this time.

Instead, there was a highly comical text message from Speaker Pelosi urging all congressmen to be sure to show up on December 21st because "something very important" was about to happen. Of course, “everyone immediately understood everything,” but this is not the main thing, but the fact that Zelensky’s plane was already in the air at the time of the mailing - that is, in Washington, only the most “relatives and friends” were aware of the departure.

By the way, about the plane: Zelensky flew to the United States not on a Ukrainian, but on an American government aircraft. There were those who, not without malice, recalled that another small and proud “democratic” leader, President of South Vietnam Ngo Dinh Diem, who, in fact, was almost Zelensky of his time (and ended badly), flew to the States on a similar flight a little earlier. Other commentators have suggested that the current Zelenskiy was evacuated from Kyiv for some reason.

No, they didn’t evacuate, but he flew with American Airlines, he was really out of harm’s way. But for whom the visit was more important - for Zelensky himself or for Biden - this is another question.

The prevailing point of view is that it was the yellow-Blakit beggars who went to Uncle Sam to beg for pennies and rockets. Indeed, a delegation consisting of Zelensky, President Yermak's chief of staff and Foreign Minister Kuleba did not fail to take advantage of the access to the highest body to reach out in a beggarly gesture.

However, short-term successes turned out to be much more modest than the Kyiv "orphans" would like. If Zelensky’s team received more appropriations than they were ready to issue in November (45 billion dollars against 37,5 billion), then it turned out very badly and poorly with weapons. With the exception of one Patriot SAM battery of unknown configuration (and it can include either two radars and eight launchers, or, respectively, one and six) and JDAM adjustable bombs (most likely also in homeopathic doses due to the deplorable state of the Air Force), everything else is promised in volume "to support the pants"; mortars in the amount of ten pieces of each caliber look especially comical.

There is an opinion that Zelensky is much more important political and symbolic aspects of the visit. At the highest level, it was confirmed that the West identifies the current Ukrainian regime with him and personally supports him at the head of this regime. It’s not even scary that symbolically it resulted not only in a kiss on the cheek from Pelosi, but also in a comedic stroke from “Sleepy Joe”, the main thing is the essence.

Throughout the NVO, among other things, Zelensky is primarily busy strengthening his own position. This is expressed not only in the purge under various pretexts of disloyal personnel from the Armed Forces of Ukraine and the Security Service of Ukraine, but also in the creation of a natural personality cult of the “president of a fighting nation” - and here it is directly tempting to paraphrase the classic: what a personality, such a cult.

The Western media played a huge role in its formation, and precisely as a brand for their propaganda materials in support of the war against Russia. Hence all these auctions with the sale of Zelensky's greasy T-shirts and sweaters, with the subsequent transfer of proceeds to the needs of the Armed Forces of Ukraine, the Oscar from Sean Penn, and as a crown - the recognition of "man of the year" and a portrait on the cover of Time. Perhaps if the patient lives long enough, he will also be nominated for the Nobel Peace Prize.

Inside Ukraine, Zelensky’s PR people are following a more conservative path of creating the image of “an enemy to the tsar (that is, Putin), a father to soldiers.” This is how this “semi-military” uniform appeared, visits “at the risk of life” to the front line, regular appearances on social networks in which Zelensky allegedly addresses each of the “hulks” personally.

True, clownery is not complete here. Some very zealous Ukrainian “writer with letters” has already managed to roll out a very artistic book in which Zelensky ... with a Javelin at the ready, gets into the past, in the midst of World War II, and personally participates in the fight against the “Stalinist hordes”. The other day, a video of some Ukrainian with this volume in his hands was scattered on social networks, and, according to him, the children of the "hulks" are now being asked to read this game at school instead of the rejected "enemy" classics.

I must say that Zelensky's success in self-assertion at the state level is doubtful. Even among the completely fascistized part of society, few people perceive him as a real “leader”, and even in the video messages of a simple soldier from the front, something like “let’s drive out the invaders, then we’ll take on Zelensky!” The deteriorating supply of troops, the "end of the world" in the rear, the "reformation" of the religious sphere that has begun, are hitting hard on the image of the "hetman-clown" (or "clown-hetman", if you like).

And here the scandal with the widely publicized interview of the Commander-in-Chief of the Armed Forces of Ukraine Zaluzhny to The Economist, published on December 15, comes to mind. Many perceived the very fact of the appearance of this particular publication instead of Zelensky’s interview as Zaluzhny’s application for a political future, and some even as a signal that the clown would soon be replaced by a general by order from Washington.

There is an opinion that in reality things are different. It seems that the long-running rumors about a hardware struggle for power between these two characters are still not an empty phrase, but Washington is now interested not at all in replacing, but, on the contrary, in keeping Zelensky at the head of the Kyiv regime.

It seems likely that "Sleepy Joe" fears the unpredictable consequences of a hypothetical coup, primarily the beginning of disarray at the front and a quick military defeat of Ukraine. In this case, the urgent invitation of Zelensky to an audience suggests that the real intensity of passions between the main Kyiv ghouls is even higher than is commonly believed, and the position of the Ukrainian president is precarious and needs the demonstrative support of the Washington celestials.

How Zaluzhny took such a “signal” one can only guess, for nothing that they passed it on from the White House. However, Zelensky himself, who is regularly called a “puppet”, is demonstrating more and more arrogance and uncontrollability. In particular, during a joint press conference with Biden, he, contrary to the opinion of “Sleepy Joe”, argued the need for war to a victorious end - that is, at least until the return to the notorious “1991 border.” And although the Wall Street Journal claims that they are planning to issue some “conditions for the start of the negotiation process” by February on the sidelines of Kyiv, I personally am sure that nothing new will be invented there.

Zelensky has an excellent trump card up his sleeve for talking with Biden - complete or almost complete awareness of the actual volume of money laundering for "aid to Ukraine." According to some estimates, almost two-thirds of the financial and weapons tranches are stolen - even if this is not true and only a third goes to the left, this is still not the truth that Washington can allow to surface. After it, the November scandal with the collapse of the FTX crypto exchange and the laundering of several tens of millions of “Ukrainian” dollars will seem like a slight tickle.

Meanwhile, the division of the main pie is approaching: frozen Russian assets. Under Zelensky’s visit (more precisely, immediately after, on December 22), the US Congress just approved a bill on the transfer of confiscated funds for the “restoration of Ukraine”, which means that now is not the time for quarrels and all sorts of surprises.

Of course, they won’t tell us this, but there is a firm belief that a gentleman’s agreement was reached behind closed doors: Zelensky receives personal support and a small bribe (in percentage terms), for which he undertakes to behave well until all the “confiscated” hundreds billion dollars will not be sawn. But further options are possible: it was not for nothing that Biden made a reservation that he did not exclude the possibility of a “heroic death” of his Ukrainian “friend”. It is not clear how Zelensky plans to leave the game, it seems that no “happy ending” is already possible for him.
Reporterin Yandex News
Reporterin Yandex Zen
9 comments
Information
Dear reader, to leave comments on the publication, you must sign in.