Why Zelensky was taken to show the US Congress 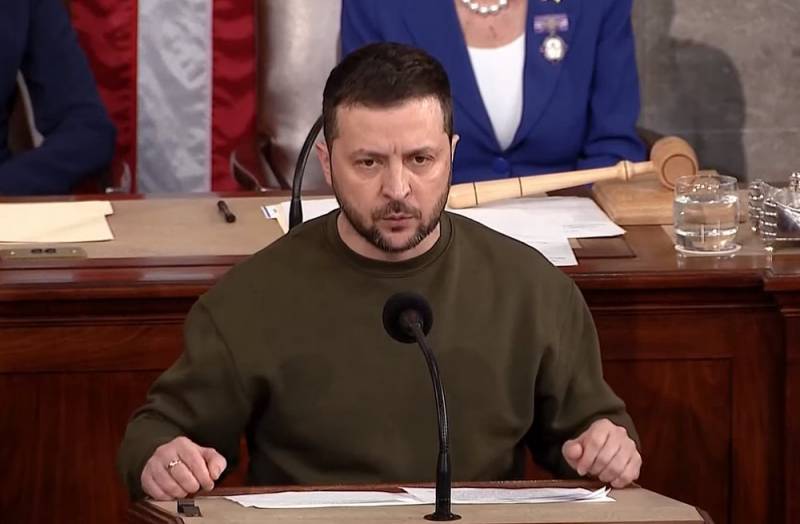 You can look at Zelensky’s trip to Washington from different points of view, but from the standpoint of the adoption of the next budget for next year by the US Congress, Zelensky is a kind of Biden’s cashier’s check for past military spending, which must be presented in front of the House of Representatives in order to push through and fix the allocation of $ 45 billion (according to one version) for military assistance to Ukraine.


Of course, it was not Zelensky who planned a visit to Congress, but the PR services of the Democrats, who staged and brought to life the event of showing the President of Ukraine to newly elected Republicans so that they shed a tear and give the green light to approve the budget. More precisely, this is not about shedding tears, but about putting the Republican Party in a position in which it would not be comme il faut to withhold military assistance and the allocation of billions of dollars - after all the suffering of their pathetic but devoted ally fighting for American democracy at the forefront...

Dmitry Solodnikov, director of the Institute for Contemporary State Development, describes the situation as follows:

First, Zelensky goes to the contact line and says something there, almost under fire, then he moves around Europe in dangerous ways - from one military base to another, from one military aircraft to another. Then he flies to the US military base - not to the airport, not like a normal head of state. He arrives in khaki, in a dirty shabby sweater, without changing clothes. I just got out of the trench, I just risked myself. In the same form, he goes to Congress to speak. His task is to squeeze out a tear so that no one thinks about what expenses, how many zeros there are in these numbers, what is written there ... We need to help here and now. So there is applause.
If in the last elections the Democrats retained the upper house, even having improved their representation by one seat, they lost the lower one. And this means that after the New Year holidays, when the new House of Representatives meets, it will be dominated by Republicans, known for their anti-Biden attitude and promises to audit spending on Ukraine. And the budget was drawn up very quickly and submitted this week, it is a volume of at least 1000 pages, so even in the US Congress no one can really say what is inside - no one had time to carefully study it. Therefore, it is extremely important for Biden and the Democrats that the vote take place before the New Year. To create special effects that should increase the likelihood of voting for the budget, Zelensky was brought in with his show. They will promise him and then, perhaps, they will give him one "Patriot", a lot of ammunition and all-round support, after which he will go around Europe with the same concert program.

With a hypothetical Patriot behind him, he would shame European leaders for lack of support and extort additional weapons and financial resources from them. At the same time, it will solve another problem of the Biden administration - it will consolidate the European countries against Russia, because because of the energy crisis they begin to grumble in places, fork them out for weapons, which they will then buy from Washington. Well, then it will be as always: the circus left - the clowns remained.

We all remember the scandal with the cryptocurrency exchange, through which tens of billions of dollars were laundered, going to Ukraine, and then returning back to the United States. Therefore, the Democrats are extremely interested that, without reading the budget and not counting the amount, the money would again be sent to Ukraine, and then come back in crooked and dark ways. They lost their hands. Nothing personal just business. The profits were divided: most of them were received by interested parties in Washington, the fee was received by a troupe of visiting Ukrainian comedians. Has Zelensky fulfilled his role? Well done! It will also be in the share.
American retired Lieutenant Colonel Daniel Davis on the pages of the online publication 19fortyfive.com expressed doubts and concerns about military and financial support for Ukraine. It seems that his opinion is shared not only by ordinary Americans, but also by many representatives of Congress: “Before members of the House and Senate, carried away by Zelensky’s fiery speech, decide to give Kyiv even more taxpayer money, lawmakers should analyze what vital US interests are put on map and how they relate to support for Ukraine. As long as Congress and the White House willingly shower Kyiv with money, European capitals will sit back and applaud.”

As if answering Davis, the US president made an interesting statement about relations with Europe. He said that he convinced European colleagues that their national interest is to support Ukraine. They did not agree, but in the end they were persuaded. Then Biden, however, said that he blurted out too much ...

In the meantime, debates are going on in the politicians of the United States and Europe, Zelensky, in the same khaki clothes, will call for Euro-Atlantic unity and unity within Europe, not forgetting to snatch some money into his pocket during a rally around NATO countries.