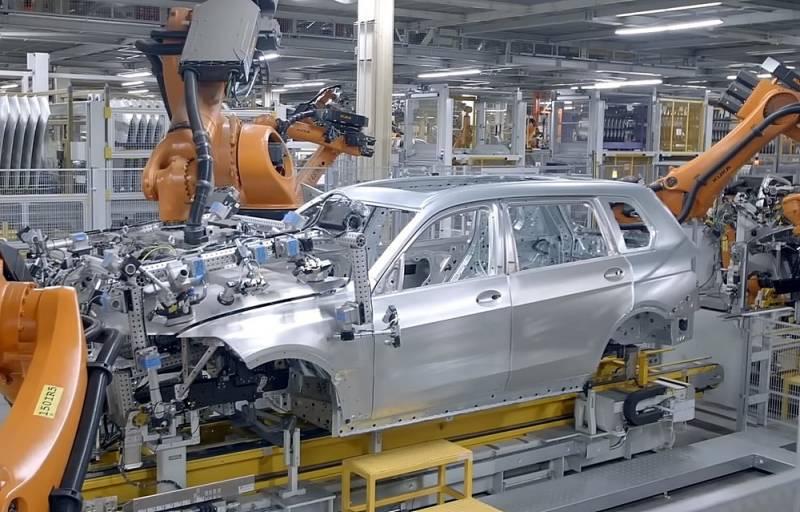 In the previous ARTICLESdedicated to the domestic automotive market, we came to the conclusion that in the foreseeable future, Russians will have to start switching to Chinese and Iranian cars. Immediately a fair question arose - where are our own cars and manufacturing plants? Have they all managed to “optimize” them too?


In fact, Russia still has its own, domestic auto industry, but it is in a state of systemic crisis, from which it has yet to get out. And in order to understand how this can happen, it is worth remembering the world experience in the development of automotive production in different countries.

It should be borne in mind that from a technological point of view, the auto industry is no easier than the aviation industry. A modern car is made up of many thousands of parts. All technical solutions have long been patented and covered by so-called patent umbrellas. Without the permission of the copyright holder, only the Chinese or Iranians can simply copy something without fear of getting into multimillion-dollar fines. In addition, the road for such cars to "civilized" markets will be closed, and they will have to limit themselves only to their own domestic market, which will negatively affect production volumes.

In general, everything is difficult. The global automotive market is already quite tight, since it has long been divided by several multinational corporations, and in recent decades, dozens of new automakers have appeared like mushrooms after rain, mainly in the Southeast Asian region. For us, their experience can be very informative, because a few decades ago there was no car industry at all, and the population moved en masse on bicycles and mopeds. So, how did the Asian auto industry develop?

Option One - independent developments. This is the most difficult option, which requires a certain technological base and experience. An example is the premium brand Luxgen, created by the Taiwanese automaker Yulon Motor. Cars under this brand are positioned as entirely developed in this Chinese province. However, do not forget about important nuances.

In particular, the parent company Yulon Motor itself began with the licensed assembly of Nissan and Mitsubishi models, the production of components for them, as well as cooperation with other large international companies. Technologies and components for premium Taiwanese brand engines are supplied by Delphi Corporation and Garrett AiResearch, gearboxes are supplied by Japanese Aisin Seiki Co. That is, from scratch, Luxgen could not appear from nothing.

Option two - purchase of a license. This is the most popular and time-tested way to develop automotive production from scratch. Some big company sells a license to a backward country to assemble their discontinued model. The buyer receives a turnkey product with known consumer qualities, which can be sold on the domestic market with a certain discount already under his own brand. During the term of the license, he trains personnel, localizes the component base, and upon completion of the license, he receives the right to develop his own models on the basis of the acquired platform.

Mitsubishi Corporation was the most active in this field at one time. Not everyone is aware, but the popular South Korean brand Hyundai initially used the car platforms and engines of this Japanese company and is still technologically cooperating with it. In particular, the second generation Hyundai Sonata sedan was created on the fifth generation Mitsubishi Galant platform and with licensed engines. The Malaysian automaker Proton, and there is one, is also based on the technologies of this Japanese company. For example, the Persona sedan is built on the same platform as the popular Mitsubishi Lancer. The Chinese company Changfeng produces the Liebao Q6 SUV, which is a licensed copy of the Mitsubishi Pajero II b. In the same place, in the Celestial Empire, a licensed Mitsubishi Lancer under a local brand drives somewhere.

If you dig deeper into popular Chinese models, most of them will have foreign "genes". For example, the Haima S7 crossover is based on a licensed body frame and chassis from the 2000 Mazda Tribute. Crossover JAC Rein is a licensed copy of the first generation Hyundai Santa Fe. Etc. The development path of the automotive industry, starting with a licensed assembly, is reliable and proven. Actually, the Soviet automobile industry once began with it. Suffice it to recall the Italian Fiat 124, which became our “penny”.

Option Three is the creation of joint ventures with foreign manufacturers. There are important nuances here, since the final result will depend on the industrial policy authorities of the country. If they pursue a liberal course, then foreign partners do not strain much with the localization of production and prefer to engage in SKD. In fact, the assembly line just works, to which imported components are supplied. We have already seen what happens when sanctions are imposed. But there is another approach.

For example, in China, the authorities of the country, in order for foreign manufacturers to gain access to their domestic market, obliged them to create joint ventures with national ones with the maximum degree of localization of production. At the same time, local personnel were trained and a component base was created. The experience gained allowed Chinese companies to subsequently develop their own models. For example, Changan Automobile Group first assembled under license from Suzuki, then created a joint venture with this Japanese company, as well as with Ford, Mazda and Peugeot-Citroen. Since 2006, the Chinese automaker began to assemble its own BenBen, Yuexiang (Alsvin), Zhixiang, Eado, Raeton, UNI-T models under its own brand. BMW and Brilliance Auto formed the BMW Brilliance joint venture in 2003, which produces German vehicles for the Chinese market. As a result of cooperation under the Chinese brand, the Brilliance V7 crossover was released, in which the MX8 platform from BMW is easily recognized. The engine and gearbox are also European. It should be noted that the German concern in 2022 increased its share in the joint venture from 50 to 75%.

Fourth way is gaining access to advanced technologies through the purchase of foreign automakers. Here we can recall the Swedish Volvo and SAAB, the American Hummer, which almost went to China, and the British Jaguar Land Rover Automotive PLC went to the Indians. Daimler AG sold 50% of the Smart division to Chinese partners. Yes, when selling Volvo to the Chinese, it was stipulated that the technology would not be transferred to them, but the actual influence of the Swedish “genes” on Geely cannot be overlooked.

Fifth way - This is an order for the development of a turnkey automotive platform from some large well-known engineering company. With money and no economic sanctions is quite a working option.

As can be seen, for the success of the development of the automotive industry, broad international cooperation is desirable with the wise policy of the country's authorities, who themselves should be interested in the gradual acquisition of technological sovereignty. We will certainly describe in detail how the previous decades were used to implement this task in Russia.
Reporterin Yandex News
Reporterin Yandex Zen
9 comments
Information
Dear reader, to leave comments on the publication, you must sign in.