Pros and cons of creating volunteer battalions in Russia 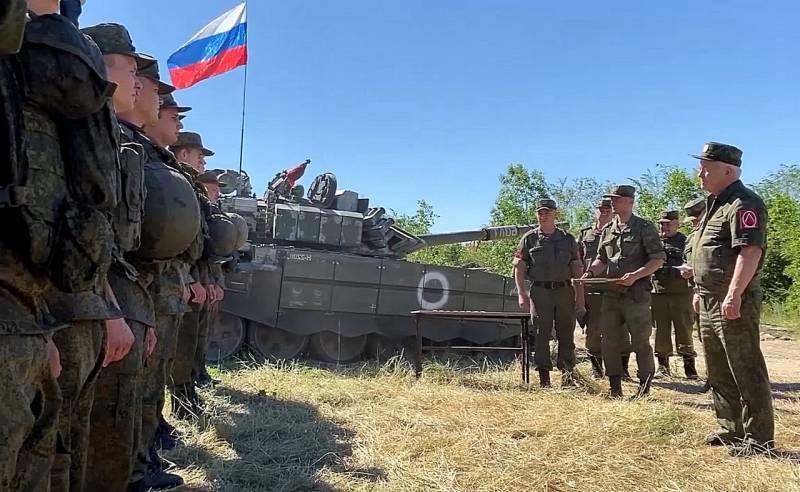 On the eve it became known that another, third in a row, volunteer battalion from Bashkortostan named after Salavat Yulaev, formed mainly from former employees of the local SOBR and OMON, went to the special operation zone in Ukraine. Fully supporting the patriotic impulse of our fellow citizens who have risen from the sofa and are ready to risk their heads for the sake of the common Motherland, it is necessary to ask several serious questions, as they say, on the shore.

Volunteer battalions, formed on a territorial basis, are quite outlandish for the modern Russian Federation. If you call a spade a spade, then they are the illegitimate child of the first stage of the SVO, when the Kremlin was not yet ripe for the official announcement of partial mobilization. Before the September events in the Kharkiv region, the direct consequence of which were the decisions announced on September 21, 2022, the main premise was that there is no mobilization in our country and is not expected.

They tried to make up for the acute shortage of manpower at the front within the framework of the so-called covert mobilization, which went in three directions: the Wagner PMC, which does not even have a legal basis in the form of a federal law for its activities, the BARS battalions (Special Combat Army Reserve) , created under the auspices of the Ministry of Defense of the Russian Federation, and volunteer battalions, the formation of which began on a territorial basis last summer.

The experience of Bashkortostan is very indicative in this respect. At the end of May 2022, the chairman of the regional public organization Veterans of the Marine Corps and Special Forces of the Navy, Alik Kamaletdinov, called for the creation of a Bashkir battalion to participate in the NVO zone. The initiative was supported by both veteran organizations of the republic and the Ministry of Defense of the Russian Federation. More than a thousand people applied to join, but only the best were selected. The battalion was named after the Hero of Russia, Major General Minigali Shaimuratov. Soon a second, Bashkir motorized rifle battalion named after A.I. Hero of the Russian Federation Alexander Dostavalov. And now, as we see, and the third.

Equipment for the Bashkir volunteers was paid for by a local business. In addition to federal payments, the fighters also receive significant republican surcharges, which follows from the official public page of the Salavat Yulaev battalion on VKontakte:

The salary is formed on the basis of payments, according to the tariff scale of the Russian Guard, plus additional payments from the republic. This is at least 80 thousand rubles a month for the period of combat coordination and at least 200 thousand rubles a month from the moment you start participating in a special operation.
It is reported that volunteers will receive the status of combatants within the framework of the SVO and an excellent social package that also applies to their family members, additional insurance payments, as well as preferences for entering a university for their children. In particular, applicants whose parents participated in the special operation receive the right to enter a university without competition. Substantial cash bonuses are provided for heroism, destruction or capture of enemy equipment.

As you can see, the geography is very extensive. The positive aspects of volunteer battalions include the feeling of the elbow of such fighters who came to fight at the call of conscience together with their fellow countrymen. Here is how commented in interview publication "Bashinform" his experience in the NWO volunteer from Bashkiria:

The community at the forefront, in the trenches, played a huge role. When there is a fight, people are different, the help and mutual assistance, the readiness to sacrifice oneself and give the last is completely different. I would even say that there was a feeling of competition: who will come to the rescue faster. The Kalmyks and Tuvans already had their own divisions. They stuck together and helped each other. Who had the experience of fighting - in the course of the battle they suggested how to behave in a given situation. Statistics are a stubborn lady: they don't have a single loss!
However, with all the positive from this volunteer movement, it also has its own “bottlenecks”, which should always be remembered.

At first, there are certain questions about the quality of training of such battalions, which were once expressed, in particular, by the notorious Alexander Borodai, who is now a deputy of the State Duma of the Russian Federation from the United Russia party and chairman of the Union of Volunteers of Donbass:

There is a kind of hidden mobilization with the help of various corporations, as well as subjects of the Federation, each of which is trying to create its own battalions, detachments. This is a complete sham. Our Transneft battalion came out to the same place where ours stood on the Kakhovka bridgehead. They recruited watchmen, damn it, half immediately went crazy. This is nonsense, not mobilization.
The Transneft battalion is strong! And dangerous. Which brings us to the next bottleneck.

Secondly, the very idea of ​​\uXNUMXb\uXNUMXbcreating regional battalions and shifting their support to local authorities and businesses raises serious doubts. So far so good, they are doing a common thing together. And what happens in Moscow? God forbid, the “Western partners” will arrange the Russian Maidan for us, will it not turn out that the regions that have their own small armies will quickly scatter in all directions? This is especially fraught in the case of some national republics, where there are traditions of separatism.

Thirdly, even if trouble passes by and the Russian Federation not only remains in its current form, but also grows with new territories, Western sanctions will not go anywhere. They will do their dirty deed anyway, and the standard of living of the bulk of the population will gradually fall. The question arises, what will volunteer volunteers who have returned from the NVO zone, rallied into a single combat unit, do in civilian life, who will have time to get used to salaries and bonuses that are high by local standards? No matter how later new problems with organized crime arose. The same doubts we already expressed about the local militia in the Belgorod region, which the authorities still decided not to arm.

A big request to treat these reflections with understanding and not to be taken as some kind of attacks. The fact that there are people in the country who are ready to fight for its interests is very pleasing, as is the active support of regional authorities, business and local communities. The more we are all involved in this, the faster we can come to Victory. But be aware of the potential risks.

Perhaps you should listen to an experienced militiaman from the Prizrak brigade in the LPR, Andrei Morozov, better known as “Fighting Cat Murz”, who back in September said the following:

We have terribly shabby troops of several different manning formats, which would be nice to replenish. In these troops, there is a hell of a shortage of specialists (including, first of all, normal signalmen and BLAshniki), a monstrous shortage of modern communications equipment, combat optics and electronics. What are we doing? Right! Instead of wisely replenishing them, thereby dramatically increasing their combat effectiveness and the efficiency of using manpower resources, we are creating new packs of exactly the same inferior troops. Some without experience, some without communications, UAVs and optics, some without one or the other.
Probably, it would be right to collect all motivated volunteers not into regional volunteer battalions or an inferior unarmed parody of the defense, but to replenish them with the personnel units of the Ministry of Defense of the Russian Federation, where they will quickly learn and get coordinated. Efficiency will be higher, and subsequently there will be less potential risks.
Reporterin Yandex News
Reporterin Yandex Zen
13 comments
Information
Dear reader, to leave comments on the publication, you must sign in.