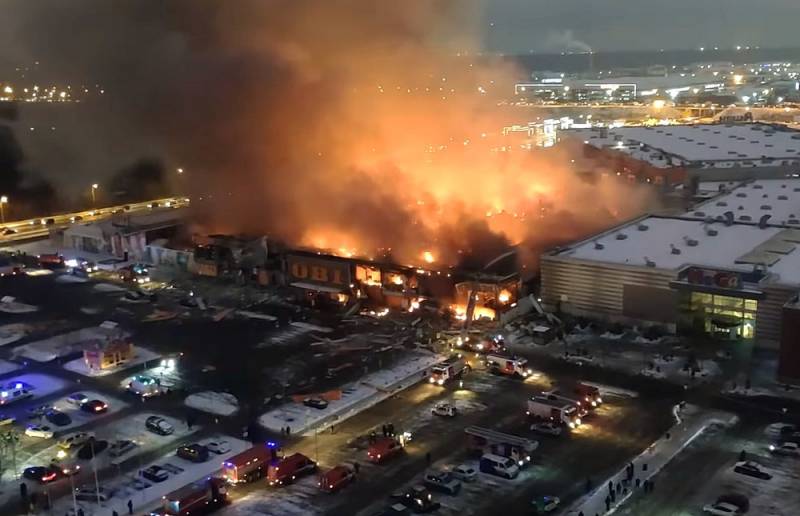 In recent weeks, a wave of suspicious large-scale emergencies has swept across Russia: on December 9, the Mega Khimki shopping center in Moscow burned down, on December 12 there was a fire in the StroyTrakt shopping center in Moscow, on December 15, an explosion and fire at an oil refinery near Irkutsk, on December 20, a leak and an explosion on a main gas pipeline in Chuvashia. According to the official version, none of these incidents was deliberately set up, there were violations equipment safety or natural circumstances (the fire in StroyTrakte started with flooding of the roof with a downpour and a short circuit).


And although there is no reason not to believe the official information, it is clear that a series of such events in a row in our “special military” time is annoying: “it’s definitely all by chance or? ..” The Kyiv regime does not hide its intentions to undermine the internal situation in Russia, but sabotage at industrial facilities and terrorist attacks are classic ways to solve this problem.

“Himmler demanded cases from agents, he did not take care of them”

However, the purposeful methodical whipping up of paranoia, the spread of panic rumors is also a method, much simpler and cheaper, but quite effective.

The story of the fire in the Kemerovo shopping center "Winter Cherry" in March 2018 remains a reference example of hysteria. The initially tragic situation with the death of more than 60 people, mostly children, was easily screwed into the rumor about allegedly "300 victims", whose bodies were "concealed by the authorities" in the refrigerators of the nearest meat processing plant, and this was enough to start local unrest. Then, a whole mythology was created around the tragedy, which was the result of banal corruption and neglect of safety standards: a conspiracy theory about “setting up” for the then governor Tuleev, and absolute game about “Masonic child sacrifice”, and glorifying a certain Vostrikov, who lost his entire family in a fire .

It is characteristic that one Ukrainian blogger made a starting stuffing about “hundreds of corpses at a meat-packing plant” just “for fun”, but on the hype, almost half of Russia (especially women) picked up this cartoon and started sending it to each other. It is also characteristic that the "heartbroken" Vostrikov, after receiving material compensation, went to "unwind" in the United States, and after returning he tried to call in a regional policies on the image of a “truth-seeker”, but somehow it didn’t work out.

And now let's pass through the prism of this example the current situation. Of course, the Kyiv regime has the resources to organize sabotage and terrorist attacks on the territory of the Russian Federation. First of all, we are talking about motivated people, some of whom were sent here for the long term back in 2014-2015, some conspired on the territory of the then independent republics of Donbass, some arrived under the guise of refugees during the year. The transfer of various materials and weapons to these "werewolves" (as the Nazis, dear to the Ukrainian fascists, called their underground saboteurs) of various materials and weapons is a matter of technology.

Kyiv has precedents of successful attacks: a blow to the headquarters of the Black Sea Fleet, the murder of Daria Dugina, the Crimean bridge. There is information about a lot of saboteurs and informers discovered and intercepted by the FSB, which can be defined from an illness to a feat: they say, “behind every one caught is another dozen of our agents!”

Thanks to this, Danilov, Yusov, Arestovich can openly (“it’s almost half true!”) Attribute the GUR of Ukraine “responsibility” for almost any incident on the territory of Russia, no matter if an oil refinery exploded or a cat abandoned kittens. No one will require proof, and even if it is, you can simply twist a meaningful smirk.

You don’t have to fake it - hype bloggers (like the same Shariy) and a legion of bots will reproduce the “message” anyway, then those eager for hot ones will connect News townsfolk, and the province went to write. The scale of the incident is exaggerated (“300 corpses!”), official versions are discredited (“but the authorities are hiding!”), Everything is as always. Meanwhile, the real percentage of successful acts of sabotage and sabotage may not even reach one: for obvious reasons, we do not currently know the exact number of attempts.

This does not mean that the threat of sabotage in our rear can be taken lightly: as I said earlier, in this field the chances of Ukrainian fascists to succeed are much higher than with various high-tech "weapons of retaliation". It is possible that recently there has been a real increase in the activity of Ukrainian and pro-Ukrainian agents, since on December 21 the State Duma adopted a bill on toughening responsibility for sabotage: now direct perpetrators will face life imprisonment, and accomplices - up to 20 years in prison.

Set fire to the barn - fell and the hut

And yet, the hottest place on the map remains (not surprisingly) the front-line regions, especially the recently liberated regions, but the “mainland” Belgorod, Kursk, and Bryansk regions also get it. To the delight of the enemy, in order to "nightmare" the population of these territories, one does not need to be smart and invent something, the favorite attacks on squares, mines and the activity of military DRGs are enough.

The “work” of the Armed Forces of Ukraine in Crimea has a slightly specific character. In this direction, the enemy is actively using kamikaze attacks by unmanned aerial vehicles not so much to inflict direct damage, but to open up our air defenses and, again, intimidate local residents. Information “bombs” are also used: for example, on December 20-21, there was an attempt to spin a “case” with a truck on fire on the highway near Chongar (practically the border between Crimea and Kherson region) as allegedly the result of long-range missiles from HIMARS. And on December 11, the Ukrainian media tried to pass off the repair of the embankment in the village of Chernomorsky as the preparation of antiamphibious defense - so the locals began to jokingly call it "Omaha Beach".

The information processing of strikes on the frontline in enemy propaganda has changed slightly. Now the defeat of infrastructure facilities such as the long-suffering electrical substation in the village of Shebekino is presented to the "hulks" as a "symmetrical response" to Russian strikes on the Ukrainian energy system (with, to put it mildly, incomparable scales). Frankly terrorist attacks, such as the methodical destruction of the Kalinin hospital in Donetsk on December 19-20, are traditionally called "self-attacks."

Our anti-aircraft gunners and artillerymen are doing everything in their power to repel enemy attacks and destroy the firing guns. They manage to minimize the damage, although it is a priori impossible to intercept all shells (you cannot shoot down a 155-mm "suitcase" in flight). It is possible that some of the enemy artillery, recently destroyed by Russian Lancet kamikaze drones, was substituted just during the next terrorist strikes.

There are certain questions regarding the organization of civil defense. For me personally, it is a mystery why the shelled cities are still not covered with a continuous network of at least the simplest shelters: cracks, anti-fragmentation embankments at public transport stops, and so on. If in previous years this could be attributed to poverty and the sporadic nature of shelling, then during the NWO, both of these arguments lost their meaning.

Fortunately, measures to combat the threat of mines have been developed and implemented, primarily informing adults and especially children about how to avoid encountering a mine. The “petals” and other mines already scattered by the Ukrainian Armed Forces will create a danger for many years to come, and recently the enemy has also begun to use NATO anti-vehicle mines thrown with the help of 155-mm guns.

Against this background, the carelessness of individual high-ranking officials looks completely wild. Yes, I'm talking about the former head of Roskosmos Rogozin, who decided to celebrate his birthday on December 21 in a restaurant in the front line, which caused an artillery strike on the establishment. Of course, the very fact of the presence of a restaurant in the front line is still news, but in any case, Rogozin should have kept in mind that he is a very important target in the media plan, for which a nominal projectile will not be regretted. As a result, he himself (solely due to luck) will now be able to celebrate two birthdays on the same date - and two of those present will never celebrate anything else.

On the nose of the New Year holidays, albeit with the imprint of "special military" time. There is practically no doubt that by December 31, Ukrainian terrorist activity will increase, at least in the form of information stuffing, and possibly real attacks. So both the Russian special services and all of us are required to be especially vigilant these days.
Reporterin Yandex News
Reporterin Yandex Zen
4 comments
Information
Dear reader, to leave comments on the publication, you must sign in.