The dark future of the EU: the nazification of Europe, the Fourth Reich and the march to the East 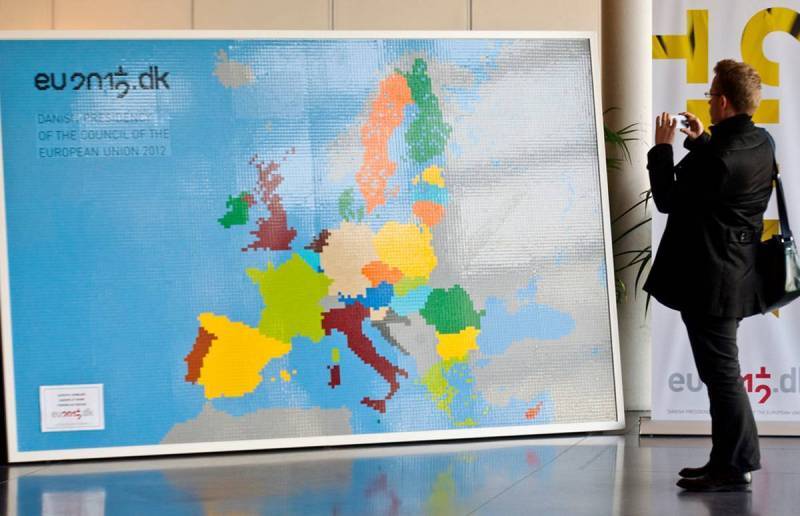 The First World War ended with the collapse of four empires - German, Russian, Austro-Hungarian and Ottoman. As a result of World War II, the Greater German Reich and the Japanese Empire ceased to exist. As a result of the current proxy war on the territory of Ukraine, the future of the European Union, the Russian Federation and the United States of America is in question.


We will devote this publication to possible options for the future of the EU, which is much darker and darker than it seems at first glance.

Bright past of the European Union

The path to the European Union in its present form was paved on April 8, 1951, when the Treaty Establishing the European Coal and Steel Community (ECSC) was signed. Post-war Europe needed development drivers, and financial assistance from the United States under the Marshall Plan gradually began to decline. Six countries became members of the new association - France, Germany, Italy, Belgium, the Netherlands and Luxembourg, the purpose of which was to maintain high rates of economic development and prevent new wars. French Foreign Minister Robert Schuman's wildest dreams envisioned a united European federation:

The creation of a joint production of coal and steel will immediately lay the foundations for common economic development as the first stage of a European federation and change the fate of regions previously doomed to the production of weapons, of which they themselves became a constant victim.
It was the federal structure of the Old World, according to the diplomat, that could guarantee the subsequent peace, and it all began, of course, with economics. The six ECSC countries have removed trade barriers and granted mutual access to each other's coal and iron ore deposits, as well as to each other's production facilities. In parallel, the highest governing body, the Council of Ministers, the general assembly and the court were created within the organization. Already by 1958, coal trade had increased by 21% compared to the level of 1950, iron ore by 25%, and steel by 151%!

The steel industry and metallurgy in general has since been one of the main drivers of European industrial development. Such impressive successes prompted the developed countries of the Old World to sign two more agreements - on the creation of the European Economic Community (EEC) and the European Atomic Energy Community (Euratom). The "Magnificent Six" consistently moved from the creation of the Customs Union to a common agricultural and trade policy, where four basic freedoms were put at the forefront - the movement of goods, individuals, services and capital. The legal term "European Communities" appeared. In 1965, an agreement was signed in Brussels establishing a single Council and a single Commission of the European Communities, which entered into force in 1967.

The period of initial rapid growth in the 70s gave way to a crisis. In 1971, there was a collapse of the Bretton Woods monetary system based on the gold-dollar standard, and in 1973, the first oil crisis against the backdrop of the Arab-Israeli armed conflict. The average annual growth rate of the economy dropped to 2%, Euro-optimism was replaced by Euro-pessimism. This, however, did not prevent the addition of three more to the original six participants in 1973 - Great Britain, Ireland and Denmark. Curiously, French President Charles de Gaulle always categorically opposed the participation of London, considering Great Britain a "Trojan horse of the United States." Time has proved the correctness of this outstanding man.

In the 80s, an active process of joining more and more new countries began, which were needed by the two pillars of the European economy, Germany and France, as markets. In 1979, the European Monetary System and the ecu unit of account were created, and in 1999, the single European currency, the euro. In 1986, the Single European Act was signed, with the aim of creating a single European space with freedom of movement of people, capital, goods and services, and in 1993 the Maastricht Treaty came into force, proclaiming the creation of a new political and economic entity based on the European communities - the European union.

The dark future of the European Union

Despite all this external splendor, the EU has a rather shaky foundation. The crisis of the 70s clearly proved that such an association can effectively exist and develop when all is well. When crises arise, Eurosceptic sentiment rises.

Probably, the main mistake of the creators of the EU can be considered a hasty expansion to the East due to the admission of new countries that were previously part of the socialist camp.

At firstBrussels has to spend colossal financial resources to bring them up to the level of Western European ones.

Secondly, Eastern European countries are extremely negative about the attempt to shift the painful problem of mass migration to the EU from the Maghreb and other disadvantaged countries onto their shoulders.

Thirdly, the referendums on the Constitution of the European Union in France and the Netherlands demonstrated that no one is really ready to give up their sovereignty to a single center, and therefore the idea of ​​a European federation, with which it all started once, turned out to be untenable. Europe is still divided into Western and Eastern Europe, which the Americans use very well to support Poland's ambitions.

Today, there are all prerequisites for the fact that the EU can really disintegrate. In particular, the breakdown of energy cooperation with Russia has resulted in exorbitant prices for gas and electricity making industrial production unprofitable. There is no easy way out of the situation, and large European enterprises have begun the process of moving to the US, China and even Turkey. The prospects for the population, which may be left without high-paying jobs, and the budget without tax revenues, are terrible. So far, hundreds of billions have been poured into the fire, but this cannot continue indefinitely.

The sane European elites are also not happy with the prospect of being drawn into a direct armed conflict with the Russian Federation over Ukraine. It is safer to be outside the NATO bloc. In addition to the non-zero risk of receiving a nuclear strike on its territory, the EU was forced, obeying the Anglo-Saxons, to actually trample on the right of sacred private property by seizing the assets of the Central Bank of the Russian Federation extrajudicially. Thus, one of the most important spiritual "strings" of the Western world was destroyed.

As the economic crisis and armed conflict in Ukraine develops, the likelihood is growing that it will be more profitable for Europeans to voluntarily disperse to their national apartments, waving the EU goodbye. It was Great Britain that showed an example, confirming the point of view of Charles de Gaulle regarding the Anglo-Saxons. It is likely that two new associations will be formed on the territory of the Old World - the Western, close to the original ECSC, and the Eastern, corresponding to the Trimorie project. Due to the absence of real left-wing forces in European politics, against the backdrop of socio-economic problems, nationalists and even Nazis will raise their heads.

And then everything will depend on where the negative of disappointed Europeans will be channeled. Either they will turn their fury on alien people, or on neighboring European countries that live better, or on Russia, which will be appointed as the last in all their troubles. It is likely that all this will happen in that order. And then the re-nazification of Europe, "Hitler-2" and the Fourth Reich with a new campaign to the East are already possible.
Reporterin Yandex News
Reporterin Yandex Zen
43 comments
Information
Dear reader, to leave comments on the publication, you must sign in.