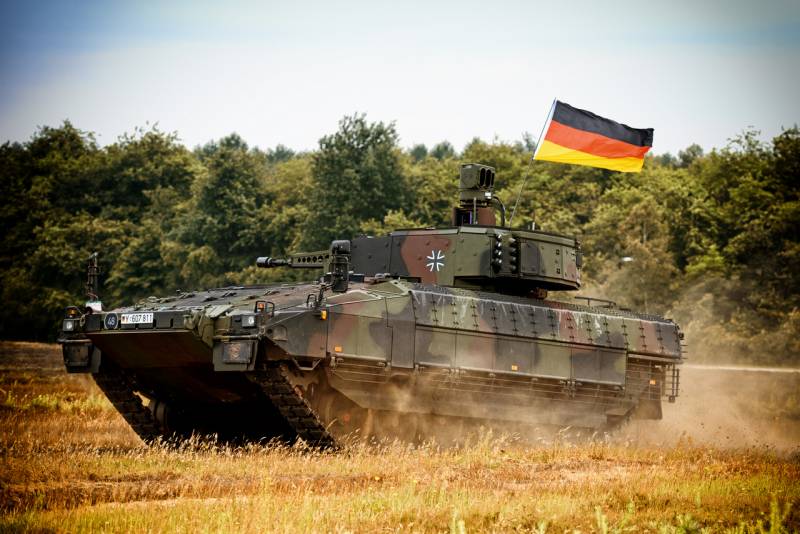 For ten months, the European layman has already become accustomed to the fact that the Eastern Front is the main one for NATO, where the heroic Ukrainian fascists are struggling to contain the “Russian threat”. Between the Western propaganda mouthpieces and the ears of the audience, whole ropes of noodles have already formed that Putin will not limit himself to Ukraine alone, but will definitely move his hordes further, to the English Channel, and therefore Europe urgently needs to arm itself ... And against such an alarming background suddenly comes from Germany news: the Bundeswehr lost a ground "battle" on its own field, in which the Russians were not even present.


On December 17, Spiegel published an article based on letters from the commander of the 10th Panzer Division, Major General Butler. The division commander said that during two weeks of routine training at the training ground, two companies of the 37th motorized infantry brigade were left without regular armored vehicles: all 18 Puma infantry fighting vehicles failed due to various technical defects, one even caught fire, threatening the life of the crew. According to the commander of the 37th brigade, General Krone, the restoration of all combat vehicles will take at least three months.

Whatever one may say, the situation is a natural state of emergency, especially since in the coming year the brigade should take up rotation duty in the joint NATO rapid response contingent. Since no one has canceled this duty, the issue of returning the old Marder infantry fighting vehicles to the 37th, some of which the brigade handed over to the reserve over the past year, is being decided. The failed cars, respectively, were quite “fresh” for themselves - although we cannot establish the exact age, but it hardly exceeds 2 years: judging by the German press, the new technique entered the unit at the beginning of 2021.

It would seem, well, so what? Even on the toy scale of modern European armies, two companies are only two companies, and in the NVO zone, about as many Ukrainian fascists with equipment go to waste every day.

But everything is not so simple. For the European (first of all, of course, German) military-industrial complex, this "spite" may turn out to be the very unfortunate "nail from the forge", from which a chain reaction like "the cavalry is defeated, the army is fleeing" begins. And this, in turn, can greatly weaken some and push other players forward on the world stage.

What is this "black cat"?

In the USSR, a high assessment of the West German military was accepted, the Bundeswehr was considered the second most combat-ready NATO force after the US Army. It is possible that it was for the better (overestimating the enemy is healthier than underestimating), but it was largely inertia from the fight against the Nazi Wehrmacht.

In Germany itself, and in the West as a whole, the Bundeswehr was also made to build up - of course, for propaganda purposes. But on the sidelines of the military, the Fritz were much less favorably spoken of than in the bravura official publications for the general public, and for good reason: from the very foundation in 1955, the Bundeswehr was riddled with corruption, incompetence and hazing, so that its real combat capability was in question. This was artistically embodied in the outrageous 1989 techno-thriller "Red Army" by the American writer Peters - in those years he served as an intelligence officer in one of the American headquarters in Germany, so the plot of the surrender of the Bundeswehr to the Soviet troops on the fourth day of the war was not born on an empty place.

The purchase of automobiles and armored vehicles for the top of the West German military has always been a profitable business: after all, in this area the generals interacted with the “native” German industrial kings, so the “kickbacks” were generous. Combat commanders and ordinary soldiers on the "ground" from these transactions got cars of dubious combat qualities, sometimes also technically inoperable.

By 1980 the situation somehow improved, the basis of the armament of the ground forces was the successful Marder infantry fighting vehicle and the good Leopard-2 MBT, the supply columns were transferred to fairly reliable trucks. But in the 1960s-1970s. real darkness reigned: tankers had to choose between outdated American M48s or "cardboard" Leopard-1s, and motorized infantry - to shake in unreliable conditionally combat-ready armored personnel carriers HS-30.

The epic with the Puma BMP is in many ways reminiscent of the old story with the Swiss armored personnel carrier mentioned above. At the beginning of the new century, as well as four decades earlier, engineers tried to create a conceptually advanced machine - and, in general, they did. True, as once in the 1960s, the new BMP turned out to be insanely expensive, extremely unreliable and unsuitable for military service. And again, as in the old days, industrialists and corrupt officials "found a common language": the non-combat-ready equipment was put into service and put into production in the hope that the "childhood illnesses" would somehow be cured.

Although the production of infantry fighting vehicles began in 2009, the first unit armed with them was recognized as combat-ready only in 2015. The point was not only and not so much in the complexity of crew training (although it is not easy), but in the absolutely awful technical condition of the vehicles of the first releases, which were brought up to standard directly in the troops by the forces of the factory brigades. For 12 years and 350 units produced, the situation has improved somewhat - but, apparently, not by much.

The leadership of the Bundeswehr preferred to turn a blind eye to these mournful deeds - which is not surprising given the Puma space price of 17 million euros per car (1,5-2 times higher than its counterparts). The combat readiness of the "black cat" in Berlin was remembered only when it came to "cutting" additional money, and it was then that it turned out that the expensive BMP stuffed with electronics (who would have thought?) Is not equipped with anti-tank weapons, then it does not have fashionable "network-centric" means of communication, then, in principle, unreliable.

The combatant commanders have already broken their fists in an attempt to get through to the authorities. The way in which information about the failure in the maneuvers got into the press is very characteristic: Divisional Commander Butler sent his letters to the Minister of Defense of the Federal Republic of Germany Lambrecht, Commander-in-Chief of the Ground Forces Mays and ... a number of other comrades in the service, one of whom leaked the text to the newspapers. Naturally, the authorities did not like such a game for the public, especially since only in March of this year a contract was signed for the second batch of 229 infantry fighting vehicles.

Panzers: the triumph of upstarts

Naturally, against the background of such "inspiring" news, the contract had to be suspended. Its resumption is questionable, since both the anti-war-minded part of society and the parliamentary opposition seized on such a convenient occasion. They recalled that only in the same 37th brigade, a similar incident with a mass failure of equipment had already occurred in the spring of 2021, and before that, other units armed with the new BMP had repeatedly encountered this.

This is the second serious blow to the reputation of the main German arms concerns KMW and Rheinmetall in recent months - the previous one was dealt by self-propelled guns of their joint production PzH-2000, which, as the experience of the Eastern Front has shown, cannot withstand truly intensive exploitation. The general bad conjuncture adds pepper: high industrial inflation in Germany, the real prospect of industrial paralysis against the backdrop of the energy crisis, and the agreement on the supply of American F-35 fighters for the Luftwaffe signed in the face of harsh criticism.

All this suggests that German industrialists will soon have to make room in the European armored vehicles market. There are those who want to grab a piece of the pie, and this is not at all about the Americans, and even more so not about the French and Swedes, whose desires strongly do not coincide with production capabilities and political influence.

The first candidates for "German substitution" are, of course, South Korean manufacturers. Seoul was extremely successful in catching on to the military ambitions of the Poles, and although the multibillion-dollar contract for tanks and self-propelled guns for the Polish Army will obviously not be problem-free, the Koreans have secured a good starting position in Europe. The scenario of expanding cooperation between them and other countries of the east and south of NATO looks quite realistic: Romania, Bulgaria, Greece.

The latter is particularly interested in a reliable supplier of weapons, as it raises the head of the military-industrial complex of the main political rival - Turkey, which is the second contender for the German market share. Recently, the Turks have been making progress on the armored front, in particular, the Altay national tank has recently acquired a Turkish-designed power plant.

And although the rearmament of its army is still a priority, Ankara may try to oust the Germans from the market of friendly Hungary: for the latter, Rheinmetall is now assembling the KF41 Lynx infantry fighting vehicle of its own design, but it is not a fact that this contract will survive the winter of 2022/23. In the foreseeable future, there may be a need to update Hungarian tanks and wheeled armored vehicles, represented by Soviet and Russian (and partly German) models, and the Turkish military-industrial complex just has the necessary assortment.

In addition to the impact on the arms market, the Cougars incident could greatly shake up the European policies generally. The fact is that he once again questioned the combat capability of the German armed forces, and this increases the potential for pressure on the Scholz government from all sides.

An additional argument is given to the “help party” headed by Strack-Zimmerman: now it will be much easier for her to explain why Germany should invest money and weapons in the Armed Forces of Ukraine, the Bundeswehr is not able to protect the country from the “Russian threat”. But a trump card also appears for those forces that consider the Scholz government to be incompetent in principle and call for a radical change of course. Finally, if the conspiracy theory about a possible Polish intervention in Germany is true, then Warsaw is also probably happy about the problems of the German troops. Which of these forces will ultimately overpower the rest, we will see in the coming months.
Reporterin Yandex News
Reporterin Yandex Zen
6 comments
Information
Dear reader, to leave comments on the publication, you must sign in.