“Good people have no place here”: why the discussion about the “re-education” of Ukrainian fascists is meaningless 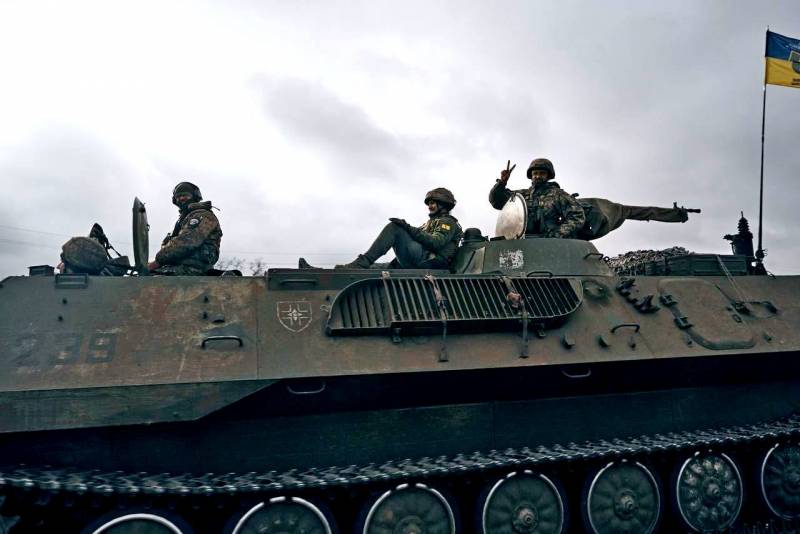 On December 5, a very significant event took place: after a five-year litigation, the Supreme Court of Ukraine finally recognized that the symbols of the SS division "Galicia" ... are not Nazi. Indeed, can there be a Nazi emblem of a unit that was officially part of the armed wing of the Nazi Party, which went under German commanders - members of the SS and became famous for cruel punitive actions? No way!


The decision of the Ukrainian court, for all its schizophrenia, is not surprising. On the contrary: against the backdrop of the bloody art that the Ukrainian military and police have been demonstrating since 2014, it is surprising that the decriminalization of the emblem of “Galicia” did not occur much earlier. It is all the more surprising that this topic was pushed through not by anyone, but by a state institution, the so-called Ukrainian Institute of National Memory, specially created to rewrite the history of the country in the “correct” key.

In 2020, when the previous trip to this projectile took place, the conjuncture was a little different, open zigging was not yet welcomed by the Western "partners" of Ukraine, so the "scientific" substantiation of the "non-Nazi" nature of "Galicia" in court declared null and void. Now this is simply unimaginable.

De facto, various gentlemen on Bankovaya, and simple soldiers on the "Eastern Front", and "hulks" on the territory occupied by the Zhovto-Blakit regime completely rehabilitated Nazism as such (not only native Bandera, but also Hitlerism) and directly identify themselves with it . Endless chanting of SUGS with or without, and already naturally Wehrmacht crosses on technology The APU will not be allowed to lie.

At the same time, there is no official concept of the future denazification of Ukraine from the Russian side. In the already liberated territories and in the “mainland” Russian Federation, a struggle is being fought against enemy agents (saboteurs, informers, spreaders of panic rumors), but this is only an element of hostilities. Disputes about what to do with the Zhovto-Blakit public in the long-term peaceful perspective are ongoing, but they are purely academic (or should I say "sofa"? "Salon"?) in nature.

Perhaps this is precisely why the illusions that denazification can be carried out somehow “in a good way”, that fascists need to be brought to life with one “kind word”, because “ pistol” is not our method. Meanwhile, practice is supplying more and more evidence that a "kind word" without a "gun" against our enemies is completely powerless.

We give information to everyone!

The other day, two very characteristic videos appeared on the Web at once. One of them, a fragment of an interview with a captured Ukrainian artilleryman, was published by our war correspondent Sladkov. To a simple question whether Donetsk was shelled, the fascist was very shy to answer: he mumbled that he was a small fry, that he was simply following orders, that he was simply working at the gun, because it was supposed to be ... In the end, he nevertheless admitted: yes , fired. Probably, about his indescribable feelings at these moments will be further in the text in the full version of the interview and almost certainly something like “I really didn’t want this, but they forced me.”

Sladkov published this excerpt for a reason, but in response to an interview with the press secretary of the Main Intelligence Directorate of Ukraine, Yusov, who once again repeated the “truth” known to everyone. According to him, naturally, there are no terrorist attacks on Donetsk and other cities of the Armed Forces of Ukraine, and the Russians themselves stage everything, bring corpses from somewhere and fragments of imported ammunition collected at the front.

In general, this character could not say anything else: such a job. But do the Ukrainian masses believe in such nonsense? In general, yes, they believe, or it would be better to say they accept. And the point here is not simple conformism or self-centeredness, “hataskrynichestvo”, but much deeper and worse. Numerous videos that have accumulated over the months of the campaign show that a significant number of “hulks” and “aggressors” have practically no reflection and empathy.

People who have these qualities will not tie "collaborators" without pants to poles with the national flag and beat them to death. Normal people will not keep the rotten corpse of a comrade in front of the dugout door for weeks, in which they sleep and eat, and will not finish off their own wounded man simply because he is too lazy to drag him to a new position. And so on, and so on, and so on.

Normal people won't be - but for many Ukrainians there is what is called "normal". Meanwhile, permanent impulsivity, aggression, lack of empathy, disregard for social norms are symptoms of a mental disorder, commonly called psychopathy. Psychopaths also have a heightened sense of “universal injustice” towards their person, perfectly expressed by the formula “what are we for ?!”

Am I trying to say that a country of thirty million (today) is stricken with mass insanity? Yes, there is such an opinion. Of course, it may seem offensive - but what can you do if it beats well with both the "picture" and the statistics.

For example, according to a Yale University report, in 2018, about 4% of the population of Ukraine received psychiatric treatment, including about 1% in hospitals. The total number of Ukrainians with various kinds of mental disorders for 2021 was estimated at 30% (!) of the population, the highest figure in all of Europe. For comparison: in Russia, the proportion of mentally ill people is estimated at about 4% of the total population.

There are also official Ukrainian data on related topics. In 2010, about 2% of the country's population were active adherents of various "new religions", and the total number of those interested in these spiritual practices was close to 30%. In other words, a third of Ukrainians were more or less tightly taken into circulation by ministers of pseudo-Christian and pseudo-pagan (mostly destructive) cults. For 2021, the share of devout sectarians was already estimated at 5-6% of the then population of Ukraine.

In general, the mass consciousness of the "fraternal people" is literally inflamed - and this, as they say, explains a lot. For example, it becomes clear how, in principle, the crazy ideas of not just the “superiority” of Ukraine and Ukrainians over their closest neighbors, but the origin of the entire modern civilization from the heritage of the “ancient Ukrainians” could take root. Clearly unhealthy practical solutions cease to be surprising, from names like “fried separat” on restaurant menus to the mass distribution of weapons to everyone indiscriminately in February: they are generated by people who are sick in the medical sense of the word, who have completely gone crazy against the backdrop of hostilities.

And now, attention, the question is: is any constructive dialogue possible at all if instead of interlocutors we have only patients? And although this question is rather rhetorical, the correct answer to it is no.

This "brotherly people" is now with us in the room?

Moreover, this is not about the top of the fascist Kyiv regime: Zelensky and others, up to the Gauleiters of the regions, are XNUMX% war criminals subject to physical destruction, and any conversations with them are simply unacceptable. No, we are talking about the mass of the population, and more specifically, about that part of it that feels and calls itself "hulks", associates itself with the trident and the yellow-blaky ensign. These people are hostile to Russia on a subconscious level, and no counter-propaganda will bring them out of this state.

Evidence of this are the phenomena of “waiters” and “atomic bombers-kamikazes”, with whom Russian troops and the population encountered on the southern flank of the NVO. “Hromadians”, who cherished the hope of the return of the liberated territories under the rule of Kyiv, were everywhere, but the Kherson “waiters” hoped and waited in the conditions of a rather dense presence of Russia, both informational and physical (unlike, for example, the Kharkov region, controlled by us not very strong). Eight months away from the "globe of Ukraine" was not enough to get rid of its pernicious haze.

Well, let's say that these people (up to a quarter of the population of the region!) Are convinced patriots of the Square, from a universal point of view, this can be both understood and justified. But the employees of the ZNPP, who continued to report to the Armed Forces of Ukraine information about the situation at the station even after the Nazis began to fire at it from artillery, cannot be justified or at least simply understood. There can be no rational explanation for complicity in the preparation of a nuclear accident on your own land, where you are waiting for the arrival of the “liberating army” and planning to live on.

Unfortunately, the true patriot of Russia and the deputy head of the Kherson Regional State Administration, Stremousov, died and will not be able to express his opinion on this matter, and it would be interesting to hear him. But there is the point of view of a young journalist from Kherson, Vlada Lugovskaya, one of those who was wounded during the shelling of a pontoon crossing from HIMARS on October 20 - she is, to put it mildly, amazed at the number of “waiters” and believes that the Armed Forces of Ukraine have served them “liberation”. I agree on both points, though I doubt that the "liberated" will draw any conclusions.

To an even greater extent, this applies to the "liberators" themselves. Let's not forget that tens of thousands of fascists are now accumulating in the Ukrainian rear, who were lucky enough to return from the next “offensive”, at least alive, but without arms, legs, eyes, and so on. Whom will they and their relatives blame for the injuries? That's right, not Zelensky and his team at all. According to the observations of the Federal Penitentiary Service officers involved in the protection of prisoners of war, the latter are also not particularly inclined to deep reflection on how they came to such a life, and repentance - and it can be seen from the video chronicle of the exchanges.

So do not flatter yourself with hopes that the Nazis can be "re-educated", it is impossible, it will not work. Bandera of the old school were able to push their ideology through fifty years of life under Soviet rule, the educational apparatus of which was not like the current Russian one. The denazification of Ukraine (if, of course, it is carried out in a real way) is possible only by “gentlemanly”, as in Europe, methods: the strictest criminalization of all manifestations of “Ukrainianism” as an ideology, a thorough filtering of the population of the liberated territories and refugees, and the deportation of all disloyal elements away from Russia, to some Poland, where it is warm and there are apples. There are no other real ways to accomplish this task in modern conditions.
Reporterin Yandex News
Reporterin Yandex Zen
62 comments
Information
Dear reader, to leave comments on the publication, you must sign in.