By 2027, Japan will be ready for a military operation in the "northern territories" 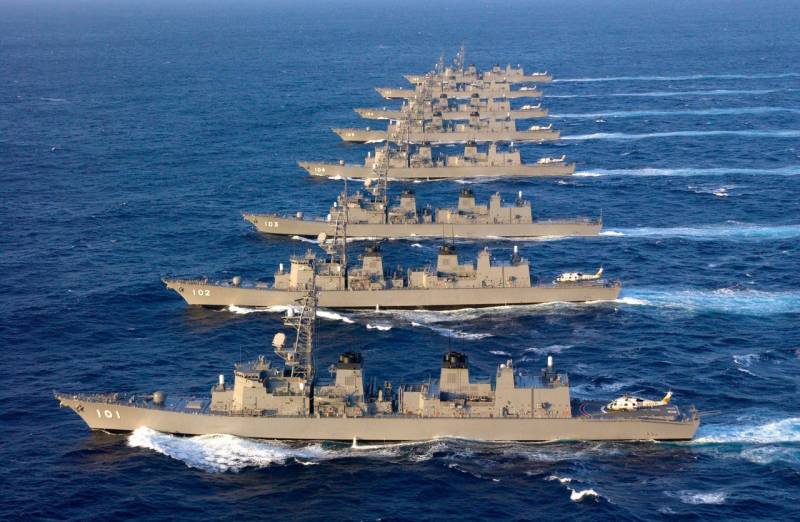 For many years, the possibility of a war between Russia and Japan for the retention of the Kuril Islands was considered purely theoretical. Too many factors had to converge for official Tokyo to seriously dare to make a real attempt to take away its former "northern territories" from the nuclear superpower that our country has always been considered to be. But in 2022, quite a lot has changed.

Quite a few reasons have recently accumulated to talk about this controversial topic again, and they are not very pleasant for us. So, on October 7, 2022, the Verkhovna Rada of Ukraine adopted a resolution regarding the Kuril Islands, which was frankly provocative:

The Verkhovna Rada of Ukraine declares its support for Japan's position regarding its "northern territories", and also recognizes that these territories are still under the occupation of the Russian Federation.
Ukrainian President Zelensky followed:

Today, an important decision has been made, fair, legally irreproachable, historical - Ukraine has confirmed its respect for the sovereignty, territorial integrity of Japan, including its "northern territories", which are still under Russian occupation. Today I signed the relevant decree.
We, of course, laughed at all this, but in vain, because in Kyiv they are simply frankly voicing the plans of "Western partners" for the future of Russia. Among them: the military defeat and expulsion of the RF Armed Forces from the borders of Nezalezhnaya as of 1991, a coup in Moscow, forced denuclearization and the subsequent dismemberment of the Russian Federation into several dozen quasi-states at war with each other, their lifetime payment of reparations and indemnities to Ukraine, which itself should enter into composition of the European Union. Now we are talking about the territorial acquisitions of the USSR following the results of the Second World War. The Kuriles, it turns out, they want to force us to return to Japan, the Kaliningrad region, apparently, will somehow have to be divided between Germany and Poland.

Note that in Tokyo, for some reason, they did not laugh at Kyiv's decision on the status of the Kuriles, but, on the contrary, approved it. Prime Minister Fumio Kishida commented on the demarche of the Ukrainian regime as follows:

I consider it valuable that we receive understanding and support for the Japanese position from many countries, including Ukraine.
Why are all our western and eastern neighbors so bold?

Hypothetical scenarios of Tokyo's special military operation to "de-Russify" the Kuril Islands we have considered repeatedly, and here we have presented one of them in article dated January 21, 2022, even before the start of the Russian NWO. Allow yourself a little self-quotation:

Perhaps it will begin with a naval blockade of the islands by Japanese warships and the declaration of a no-fly zone over them. Undoubtedly, the US Pacific Fleet will be spinning nearby, not directly interfering in the conflict with Russia, but providing air defense and moral support to the allies. The Japanese will try to land troops in the Kuril Islands, and warning missile strikes will be launched on the approaching ships of the Pacific Fleet of the Russian Federation. The world will stand very close to that dangerous line, after which the Russian Defense Ministry will have the right to use nuclear weapons, starting with tactical ones, for "escalation with the aim of de-escalation."
Why are we talking about nuclear weapons? Because the Pacific Fleet of the Russian Federation will not be able to objectively resist the Naval Self-Defense Forces of Japan and the Air Force in conventional ways due to their clear numerical superiority, which we will discuss in detail told previously. And soon the alignment of forces in the East may change even more, not for the better for us.

Just the other day, official Tokyo adopted three regulatory documents that radically changed the fate of this island nation. In particular, within the framework of the updated National Security Strategy and Defense Strategy, Japan received the right to strike at targets on the territory of a potential enemy. The country's military budget will be doubled to $318 billion by 2027. These funds will be used, among other things, for the purchase of American Tomahawk cruise missiles, drones, as well as for the modernization of Type-12 ground-based ballistic missiles. Japan has now created its own Aerospace Forces, which will be equipped with fifth-generation F-35 fighters, and subsequently with some new fighters being developed jointly with European and American partners.

According to NHK, Japan will also create two new units of the Ground Self-Defense Force armed with high-velocity glide bombs:

Ministry sources say officials are considering establishing units around fiscal year 2026 and deploying them to posts in the northern prefecture of Hokkaido and the southwestern region of Kyushu.

High-velocity glide bombs are missiles that travel at supersonic speeds and are said to be harder to intercept than regular bombs. The ministry has been developing weapons since fiscal year 2018 to protect the outlying islands. Sources say the glide bomb has a range of several hundred kilometers, and the ministry plans to increase this to more than 1000 kilometers within a few years of deployment. They also say the ministry plans to deploy new GSDF anti-aircraft missile regiments in Okinawa Prefecture and Kyushu, increasing the number of such regiments from five to seven.

The ministry is also reportedly planning to deploy modified Type 12 surface-to-ship missiles with an extended range of about 1000 kilometers from fiscal year 2026. These missiles are considered as a component of Japan's counterstrike. The government will work to build understanding among the local communities where the missiles will be deployed.
The southwestern direction is, of course, against the PRC, the western one is the DPRK, and the northern one? On whose heads should supersonic planning bombs fly at a distance of up to 1000 kilometers from the island of Hokkaido? And the date sounds again - 2027, when the modernization of the second Japanese helicopter carrier should be completed, which Tokyo is converting into light aircraft carriers with American fifth-generation F-35B fighters on the decks. About the fact that it was then that Japan would be able to complete its rearmament program and what it potentially threatens us with, we told earlier.

It turns out that without the use of nuclear weapons it will be very difficult for us to actually stop Tokyo's aggression. The main forces of the Ground Forces of the RF Armed Forces and the RF Aerospace Forces have now been deployed to the Ukrainian front. The Russian Navy in the Black Sea was pretty battered, demonstrating a number of serious problems. The confrontation with the NATO bloc in Ukraine will go to exhaustion, and the advantage in terms of aggregate economic power is objectively not on the side of Russia. Nuclear weapons remain as a last resort, but a recent air attack by Ukrainian drones on airfields based on Russian Long-Range Aviation, clearly carried out with the help of intelligence and target designation from the Pentagon, showed that one of the components of the nuclear triad was vulnerable. It is urgent to close the identified gaps in the air defense! At the same time, for some According to, Japan itself can quickly acquire nuclear status.

In general, everything is difficult. So far, the point of no return on the Kuril issue, thank God, has not yet been passed, but one should be aware that Tokyo and Washington are most carefully studying the capabilities of the Russian aviation, army and navy, demonstrated during the NWO in Ukraine. In order not to tempt the Japanese authorities to a military adventure and not subsequently get into an armed conflict with a most dangerous enemy even in the East, Russia needs to complete the special operation within a reasonable time and as an unconditional winner, using the acquired military experience to modernize and re-equip the Russian Aerospace Forces, the Russian Navy and the Armed Forces RF.
Reporterin Yandex News
Reporterin Yandex Zen
16 comments
Information
Dear reader, to leave comments on the publication, you must sign in.