Plunging into darkness: the agony of the energy system of Ukraine and the paralysis of Western air defense 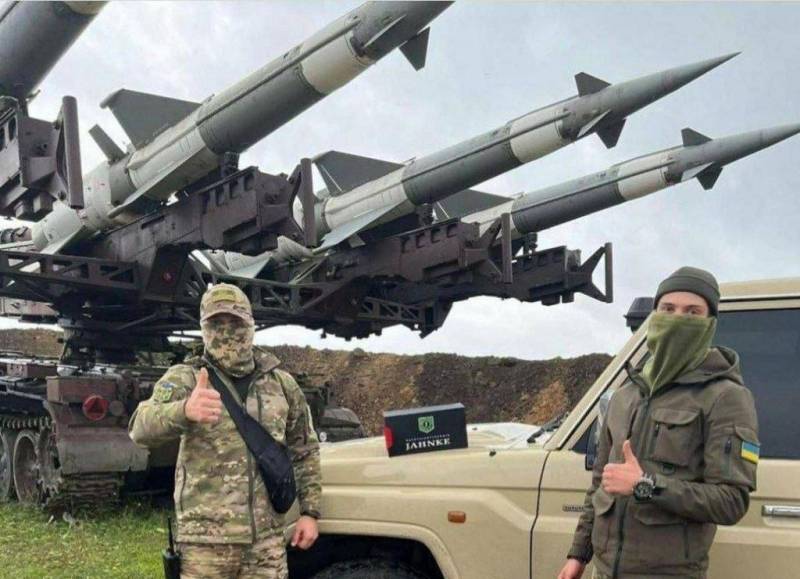 The other day, the Fuhrer of the Ukrainian people once again stated that the minimum condition for starting peace negotiations with Russia is the return of control over the territories along the 1991 borders to the Kyiv regime. Unfortunately, Zelensky did not add anything about “living space” - it would have sounded very funny in every sense .

And the point here is not even the parallels between fascist Ukraine and Nazi Germany, to which even the Western media known for their “objectivity” can no longer turn a blind eye. Everything is much more serious: the maniacal readiness of Zelensky and his party lord to continue the “total war” every day brings Ukraine closer to the state of precisely that lifeless (more precisely, unsuitable for modern civilized life) space.

Our armed forces continue to methodically destroy the energy infrastructure of the fascist state. In the next wave of attacks on December 16, the stakes were raised: a significant part of the attacks fell not on distribution networks, but on generating capacities. In particular, for the first time such a landmark object as the Dneproges was hit: missiles hit one of its two engine rooms with hydro generators.

This is already a step beyond the high-voltage line of no return: if with transformers Kyiv can still count on any options for help from the “allies”, at least theoretically, then the West will no longer be able to restore the power plants themselves. It is likely that the next Russian salvo will be mainly on generating capacity, and its success will mean the destruction of Ukrainian energy as such.

In this regard, with a new acuteness, the question arose of strengthening the fascist air defense. Kyiv desperately demands the supply of Western air defense systems in the hope that this "wonder weapon" will somehow turn the tide of the air campaign. I must say, there are big doubts: both in the "miracle" of Western air defense, and in the fact that Zelensky will generally receive the coveted systems.

In terms of the number of missiles involved, the attack on December 16, apparently, was not a record one. Ukrainian propaganda claimed "more than 60 missiles", of which "59 were shot down". This spawned a new meme about the "Iranian rubber missile", the sixtieth in a row, which single-handedly hit all targets, bouncing from one to the next, and then jumped back to base.

Nevertheless, in terms of the effect it had on the energy system, the impact again turned out to be a record one. Evidence of this is at least a long, more than a day, inoperability of the Kyiv metro - this has never happened before. It was quite amusing to watch enemy propaganda swaying from side to side: first, panic statements about the defeat of “infrastructural facilities”, then the notorious “59 out of 60 shot down” and, finally, the announcement of an emergency due to energy shortages.

In addition to attacks on generating capacities (apart from the defeat of the Dneproges, it is reliably known about the failure of the Kharkiv CHPP-5 and the possible shutdown of the South Ukrainian NPP), the accumulation of damage from past strikes led to such results. The energy system of Ukraine is becoming more and more like Trishkin's caftan, the number of knocked-out nodes does not allow you to confidently redirect flows.

Enemy propaganda does not leave attempts to define the disease as a feat. A fresh tale from this series: during the air raid, the operators allegedly deliberately “lower the switches” to minimize damage. This is justified by the fact that in this way it is possible to avoid uncontrolled power surges and short circuits with fires. Perhaps, theoretically, this is how it is, but in practice, air raid alerts are usually announced on the ground after the first explosions and the spontaneous “end of the world”. In addition, on December 17, a nationwide alarm was announced, but there were no shutdowns - where there was still something to turn off.

"Capacity maneuvers" in themselves become dangerous (for the end user) business. Increasingly, from the "other side" there are reports that when the current is restored, exorbitant voltages of 300-500 V begin to flow into houses, destroying household appliances that have not yet burned down. machinery. The consequence of overloads are fires: both in apartments and on yard transformers.

Another trap for the “hulks” is “points of invincibility”. It is known about a number of cases of fires in them, which were caused by various factors: from a short circuit to an attempt to make a fire in a de-energized PN.

In general, autonomous sources of electricity do not justify the hopes that the Nazis had placed on them. For individual domestic use, they turned out to be too expensive, in addition, they have already managed to cause a number of fires in residential buildings. For use with industrial, repair and medical equipment, household gasoline generators are too weak, and powerful diesel power plants are not enough for everyone.

The latter has the most direct impact on the course of hostilities, limiting the ability of the Armed Forces of Ukraine to rescue wounded "invaders" and restore damaged or broken combat vehicles. Oxygen stations, blood coolers, welding machines, lifting mechanisms and other devices necessary in the near rear often simply have nothing to connect to: either there is no generator, or there is no fuel for it - and a powerful generator consumes no less than an armored personnel carrier per hour, if not more.

The lack of current and the lack of fuel undermine not only the tactical, but also the operational capabilities of the Kyiv regime - and first of all, we are talking, of course, about the railway. Although the enemy has adapted during temporary shutdowns to haul trains with a few diesel locomotives distributed throughout the network, the scope of “temporality” is expanding wider every time, and the shortage of fuel for locomotives is felt more and more acutely.

Finally, in the course of infrastructural strikes, the anti-aircraft shield of the Armed Forces of Ukraine also suffers: anti-aircraft gunners, forced to respond to attacks on energy facilities, open the positions of their complexes, which are immediately struck by appropriate means. As you know, this tactic was also used by Russian troops in previous waves of bombardments, when radars of Ukrainian air defense systems and fighters launched into the air were destroyed along the way, and on December 16 was no exception: X-31P anti-radar missiles hit 4 radars of S-300 systems, which left firing batteries are half-blind. And this fact makes this fact doubly “pleasant” for the enemy by the fact that the anti-aircraft gunners set themselves up, in fact, just like that - if they managed to shoot down at least something, then in percentage it will hardly be a tenth of the total number of Russian missiles.

The apparent inability of Ukrainian air defense to somehow noticeably weaken Russian strikes (there is no longer any talk of "reflection") makes the Kyiv choir of mourners even louder and more persistently demand the supply of additional anti-aircraft weapons. True, this case is still somehow not glued: even the “125 anti-aircraft guns” promised by British Prime Minister Sunak (whatever is hidden behind this designation) still remain on paper somewhere in London, although a whole month has passed.

However, the main gift that Zelensky would like to receive for the New Year is not some kind of guns, but Patriot air defense systems. On December 14, there were even stories in the foreign press that the first battery was allegedly ready to be sent to Ukraine, but in the following days this information was refuted several times, including by Biden himself.

The reasons why the Nazis (most likely) will not get hold of the Patriot are exactly the same as why they have not yet been handed over and are unlikely to be handed over ATACMS missiles, and the first of them is the limited number of complexes themselves. According to open data, the US Army has 480 launchers available - this is not so much, since this number needs to provide air defense not only for the territory of the States themselves, but also for numerous bases around the world.

The second main reason is the significant risk of leakage of some elements of the complex to Russia as a whole. The honesty of the Ukrainian "allies" is already known to Western curators so well that now the UK is planning to audit the military assistance provided to Kyiv. And the importance of the Patriot to the US military is too great to trust the secrets of the system to yellow-Blakyth warriors.

Doubts about the effectiveness of air defense systems in the hands of the latter also take place. Before our eyes there is the experience of the “successful” use of NASAMS complexes, which have already reliably “knocked down” at least two civilian vehicles in Kyiv. Moreover, it is not clear what exactly led to these incidents: poor calculation skills, the famous Ukrainian tactic of placing air defense systems directly in residential areas, or the “rotten” state of the missiles themselves. The latter, oddly enough, may take place: the system uses standard AIM-120 AMRAAM air-to-air missiles, which have been in service for many years, so the Nazis could well have been thrown off not the freshest stocks.

It is much more realistic to continue deliveries of Soviet-style air defense systems. The advantages are obvious: the presence of some kind of familiarity with these systems, even despite the gradual elimination of experienced anti-aircraft gunners, and the remnants of a repair base. But the disadvantages of this approach are also visible: the limited still unused stocks of Soviet anti-aircraft weapons and their dubious technical condition.

It has already reached the point that the Poles are offering the Ukrainian "brothers" obvious antiques: the S-125 complex in export performance. A photograph of Ukrainian officers against the backdrop of a launcher has been circulating on the web for several days, but it is still unclear whether it has already been posted, or whether it is just a “photo with a landmark” somewhere in Poland.

Much more interesting is the offer of Greece, which has the S-300, Tor and Osa complexes. On December 16, Athens announced its readiness in principle to transfer the complexes as soon as the United States deploys its Patriots in Crete instead. This decision seems to suit everyone - Ukraine receives missiles, the States do not risk anything, but its implementation will take some time.

It’s just that Zelensky doesn’t have much time. The next wave of strikes on the energy system can be expected even before the New Year, and after it, perhaps, there will be nowhere to rush.
Reporterin Yandex News
Reporterin Yandex Zen
19 comments
Information
Dear reader, to leave comments on the publication, you must sign in.