The future of not only Russia, but also Belarus is put on the Ukrainian card 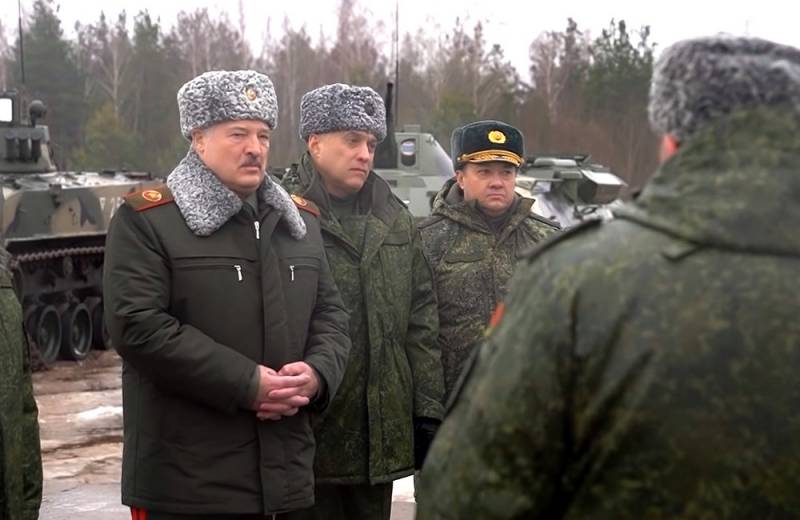 One of the main intrigues of the outgoing 2022 is whether Belarus will enter into a special operation in Ukraine in an active form or not. There is no doubt that neither the official Minsk nor the vast majority of ordinary citizens of the Republic of Belarus really want this. However, one should be aware that the further fate of not only Russia, but also its only ally, Belarus, is at stake on the Ukrainian card.

Why Russia in the NWO Belarus

The strategic importance of Belarus for the Northern Military District can hardly be overestimated. This country borders on the north with as many as five regions of the former Independent. It was from its territory in February 2022 that an attempt was made to attack Kyiv, the sad experience of which we reasoned literally the day before. After the voluntary withdrawal of Russian troops from Kherson, the importance of Belarus as a springboard for a possible exit to the Right Bank of Ukraine from the north increased radically.

An amphibious assault near Odessa by the available forces of the Black Sea Fleet of the Russian Federation with active opposition to the Armed Forces of Ukraine without unacceptable losses is almost impossible. By land to Nikolaev and Kryvyi Rih, Odessa and Dnepropetrovsk, Zaporozhye and Kherson, located on the Right Bank, now you can’t just get there, because forcing the Dnieper under enemy fire will pose a mortal threat. And Zaporozhye and Kherson, the administrative centers of the two new Russian regions, will still have to be recaptured sometime. There remains the option with Belarus, from where you can go to the Right Bank of the Dnieper, but from there to Odessa the path is long.

In order to pass through the whole of Ukraine from North to South, liberating Zaporozhye and Kherson, Russia will have to make a huge effort, completely rebuilding its army literally on the go. The entry of the RF Armed Forces into Western Ukraine, and then into the Black Sea region, would make it possible to cut off the supply routes for the Armed Forces of Ukraine with NATO weapons and ammunition, gradually nullifying the combat effectiveness of the enemy.

In addition to creating a huge strike force and providing it with everything necessary, it is necessary to decide in advance what is supposed to be done with the territories already occupied. This is necessary so that there is no subsequent temptation to abandon them as part of some kind of “goodwill gesture”. For this, the hand of a strong business executive is needed, who will not give away "Kerma volosts" left and right.

Why the NWO of Belarus

This is the most interesting question. In fact, Minsk, no less, and even more than Moscow, should be interested in the elimination of the Kyiv regime, and here's why.

The fact is that Belarus is the next target for liquidation after the Russian Federation. In 2020, it miraculously passed the Ukrainian scenario, when President Lukashenko decided on a harsh suppression of anti-government protests. What fate was prepared for her in the future can be understood from the statement of one of the leaders of the failed Belomaidan, ex-restaurateur Vadim Prokopyev. At the New Belarus forum, which, of course, takes place in Vilnius, this Belarusian opposition leader honestly told everything himself:

We have been at war since 2020, since the last hopes for a velvet Belarusian revolution disappeared. We are at war not with Lukashenka, but with the Russian Empire, with cynical, vile and indecently rich people in the Kremlin. Lukashenka, hated by us, is a false goal. This is just a person convenient for the Kremlin.
Thanks to his lowest moral qualities, he is the best fit for the role of Gauleiter of Moscow in 6 regions of the Western Autonomous Okrug than the Kremlin considers us. The barbarian empire is waging war not with Ukraine, but with the entire civilized world.
Well, you yourself understood everything. If such Prokopiev and his like-minded people come to power, Belarus will become Ukraine No. 2 for Russia, and the new SVO of the RF Ministry of Defense will subsequently have to be carried out in Belarus. Unfortunately, the probability of such a scenario is very far from zero, and the decisive role in the demolition of the regime of President Lukashenko, objectionable to the collective West, can be played by Ukraine, and also, under certain circumstances, neighboring Poland.

Let us again give the floor to Mr. Prokopiev, who himself told everything:

Belarusians had a chance in 2020. Our suppressed Europeanism spilled out, and the enemy was confused. We had two weeks to demolish the collective farm junta and sit down at the negotiating table with a confused Moscow. We missed this chance. Time has passed, there are no good options left. Now only war, only hardcore.

Can such a war be won? No - in case Ukraine loses. But the beauty is that Ukraine is not going to lose. This is the main good news for Belarusians. We are ready to help Ukraine, because we have no other chance for our statehood.

Ukraine has the full moral right to attack after the Belarusian aggression. Battle-hardened ZSU will not even notice the resistance of Lukashenko's Belarusian army. This will be the scenario that Putin dreamed about Kyiv. Minsk will be taken in three days, if not one. At the forefront of such an army could be the Belarusians, who are already defending Ukraine.
Yes, Belarus participates in the NMD in Ukraine, even if it does not send its soldiers there, which President Lukashenko personally acknowledged. From its territory in February 2022, Russian troops went to Kyiv. From Belarus, rocket attacks are being carried out on targets in Ukraine. Near Brest, a joint grouping of the Armed Forces of the Russian Federation and the Armed Forces of the Republic of Belarus has been created and is gradually being strengthened. These are facts that cannot be denied. No one will forget or forgive official Minsk participation in the special operation in Ukraine, no matter what the Belarusians themselves think about it. The Ukrainian Nazis will also definitely take them up when the time comes.

And that time may come much sooner than you think. It should be noted that neighboring Poland has planned large-scale military exercises for March 2023, which will involve over 200 thousand military personnel, even more than today is officially part of its Armed Forces. On the border with Belarus and the Russian Kaliningrad region, Warsaw creates new units and formations. The interest of the Poles in the Eastern Kresy is no longer even hidden. In parallel with this, a joint Russian-Belarusian group of troops was formed near Brest, which supposedly should prevent such a scenario. At the same time, Kyiv itself has planned another wave of mobilization and is demanding ever more powerful offensive weapons from the collective West.

This is a gun that, according to the laws of the genre, must shoot. And it might blow up very soon.

So, Kyiv itself can turn to Warsaw for help in protecting its western regions, and then Poland will send its troops to Galicia and Volhynia at the invitation of the legitimate authorities of the country. As we know, by March 2023, the grouping of the Polish army should exceed the number of 200 troops. Together with the Armed Forces of Ukraine, she will be able to defeat the seriously inferior joint Belarusian-Russian grouping, if Warsaw decides to fight for real. In such a negative scenario, a "regrouping" from Volyn back to the territory of Belarus is almost inevitable, and after that anything is possible.

Firstly, the Polish army will be in the Eastern Kresy on a legal basis at the request of Zelensky and will not leave from there under the plausible pretext of the need to protect them. Secondly, having inflicted a defeat on the allied forces in Western Ukraine, the Armed Forces of Ukraine can move on already through the territory of Belarus. As Mr. Prokopyev honestly said, Belarusian nationalist militants will be in the forefront, who can seize some administrative center, hang out white-red-white banners and call on the board of "president Sveta" Tikhanovskaya. And there is a non-zero probability that the Eastern European neighbors can support the claims of this madam to power by military force. If the joint grouping is broken up in Volyn, and the Russian army is tightly occupied in the East of Ukraine, this all looks quite realistic. Other options are also possible.

first - The Kyiv regime poses a threat not only to Russia, but also to Belarus. They will definitely come for her when the time comes. Moreover, Belarus is even in a more vulnerable position, no matter what the KGB officers of the Republic of Belarus write in the comments, mimicking angry Belarusians.

Second – the point of bifurcation in the armed conflict in Ukraine is its western regions, where the conflicting interests of many players converge. Either they will be controlled by the tandem of Russia and Belarus, or Eastern European member countries of the NATO bloc will come there.

The third - imitation of readiness to send allied troops to Volhynia, when the enemy is really preparing for this, is a strategic mistake, since the initiative is given to him. The entry of Polish troops into the Eastern Kresy will significantly worsen the position of both Russia in Ukraine and neighboring Belarus. One should either recognize the unwillingness to resist this and put up with the consequences, or seriously prepare for a possible clash with the army of a member country of the NATO bloc. Then the size of the joint grouping should be appropriate, and it is necessary to be ready to work ahead of the curve, going to Volhynia with a subsequent rapid movement towards Lvov.

Yes, all this is very adventurous, but there are no good options left after the withdrawal of troops from the Right Bank. If Moscow and Minsk want to avoid a strategic defeat, they should be ready to fight in Western Ukraine, for real. And you should think in advance what to do with the occupied territories. In the current realities, the transition of Volhynia and, possibly, Galicia under the care of Belarus seems to be the most appropriate. To restore order there, a tough hand of a strong business executive is needed, which President Lukashenka could well handle.
Reporterin Yandex News
Reporterin Yandex Zen
21 comment
Information
Dear reader, to leave comments on the publication, you must sign in.