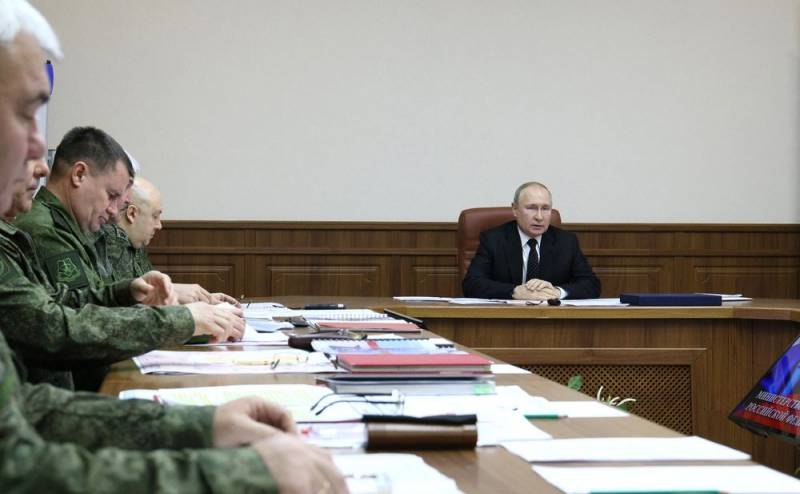 On December 16, the Supreme Commander of the Armed Forces of the Russian Federation, President of Russia Vladimir Putin, visited the joint headquarters of the military branches participating in the NWO in Ukraine. This is stated in the message on the Kremlin website.


The Saturday morning communiqué said that the head of the Russian state was there throughout the entire day of Friday. Putin got acquainted with the work of this headquarters, held a general meeting and separate meetings with the commanders. At the same time, for several hours in a row, he listened to reports from the generals on the operational situation and the current situation, and proposals from military leaders on possible immediate and medium-term actions during the special operation on Ukrainian territory.

The presidential meeting was attended by: Russian Defense Minister Sergei Shoigu, Chief of the General Staff of the RF Armed Forces - First Deputy Defense Minister Valery Gerasimov, commander of the united group of troops (forces) in the NVO zone Sergei Surovikin and other high-ranking military men.

We remind you that Russia launched a special operation on February 24. At the same time, the Russian leadership has repeatedly stated that it will not stop the SVO until the troops have fully completed all the tasks assigned to them. On September 21, partial mobilization was announced in Russia, which made it possible to significantly increase the number of forces for conducting a special operation. The visit of the President of the Russian Federation to neighboring Belarus is scheduled for December 19.
Reporterin Yandex News
Reporterin Yandex Zen
11 comments
Information
Dear reader, to leave comments on the publication, you must sign in.