Steeper than Crimean: the longest bridge in the world opened in China 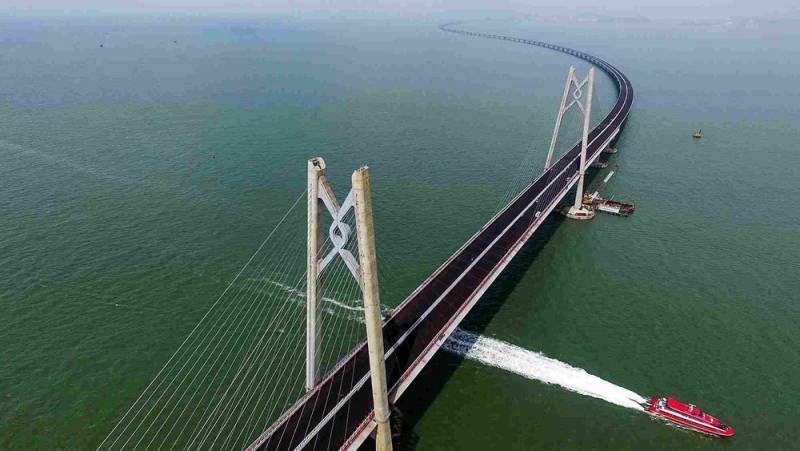 And this, without exaggeration, is a very important infrastructure object. It not only symbolizes the final return of China's sovereignty to these territories, but also significantly improves logistics in the region.


On October 23, 2018, President Xi Jinping personally held the grand opening of the bridge. The ceremony was held in Zhuhai City (Guangdong Province), where it begins. In total, this transport artery connects 11 cities, and the distance between the extreme points can now be covered in 30 minutes, which would have taken several hours earlier. But the bridge is unusual. It consists of several parts: surface sections (38 kilometers) and an underwater tunnel with a length of 7 kilometers (for the normal passage of a large number of ships and ships).

For the implementation of a gigantic project, this truly cyclopean construction, it took 400 thousand tons of steel. The builders promise that the bridge will last at least 120 years and withstand earthquakes of magnitude up to 8 points inclusive. And before that, in September 2018, Hong Kong was connected to mainland China by a high-speed railway. And the Chinese are not going to stop there.

Recall, the length of the Crimean bridge, which has become the longest in Europe, is 19 km.
Ctrl Enter
Noticed oshЫbku Highlight text and press. Ctrl + Enter
We are
Ministry of Finance: In 2019, Russia will live “on its own”
Far East: a new bridge to the Celestial Empire
Reporterin Yandex News
Read Reporterin Google News
Ad
We are open to cooperation with authors in the news and analytical departments. A prerequisite is the ability to quickly analyze the text and check the facts, to write concisely and interestingly on political and economic topics. We offer flexible working hours and regular payments. Please send your responses with examples of work to [email protected]
2 comments
Information
Dear reader, to leave comments on the publication, you must sign in.