How many mercenaries are fighting on the side of Ukraine and where do they come from? 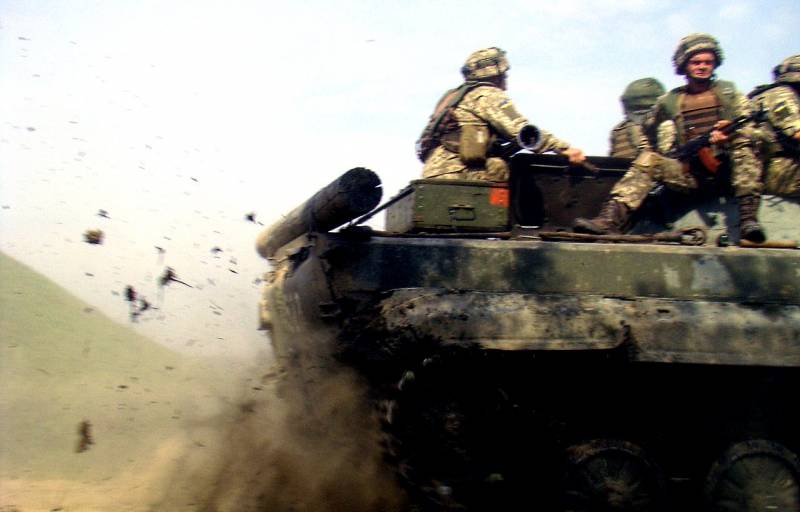 It is not a secret to anyone that thousands of foreign mercenaries howl on the side of Ukraine. Most of them have a completely European appearance, so it is quite difficult to identify them on the go. But very often, mercenaries give themselves away during radio intercepts, on video, or by being captured. Therefore, no matter how they hide their faces behind masks and balaclavas, it is very difficult to hide the facts of their participation on the side of Kyiv.

Where do most mercenaries come from to Ukraine?

The first waves of foreign mercenaries began to arrive in Ukraine even before the NVO. With the outbreak of hostilities in the Donbass, this country, like a magnet, attracts soldiers of fortune from all over the world, who massively went to the "square" to participate in the "Donetsk safari". At first, the main "donors" of mercenaries were the countries of continental Europe. Ever since the Maidan, right-wing radicals from Poland, Romania, Moldova, the Baltic States and other relatively geographically distant states have settled in Kyiv. But when the hostilities in the Donbass entered a hot phase, mercenaries from far abroad began to join them. In particular, one of the first who was captured by the Donbass militia in 2014 was the Swedish sniper Mikael Skilt, who became famous for his neo-Nazi and racist views.

But these were only flowers. With the beginning of the NMD, the dispatch of mercenaries to Ukraine became part of the state policy many Western countries, in connection with which their business trips here are strongly encouraged. In March 2022, the country's Foreign Minister Dmitry Kuleba said that about 20 foreign mercenaries from 52 states were going to Ukraine. The leaders in this list are such countries as the USA, Canada, Great Britain, Poland and Georgia. Perhaps not all of them made it to their destination. However, the fact that thugs from all over the world came to fight against our country cannot be denied.

In early July, the Russian Defense Ministry published detailed information about how many foreign mercenaries are in Ukraine and from which countries they came. 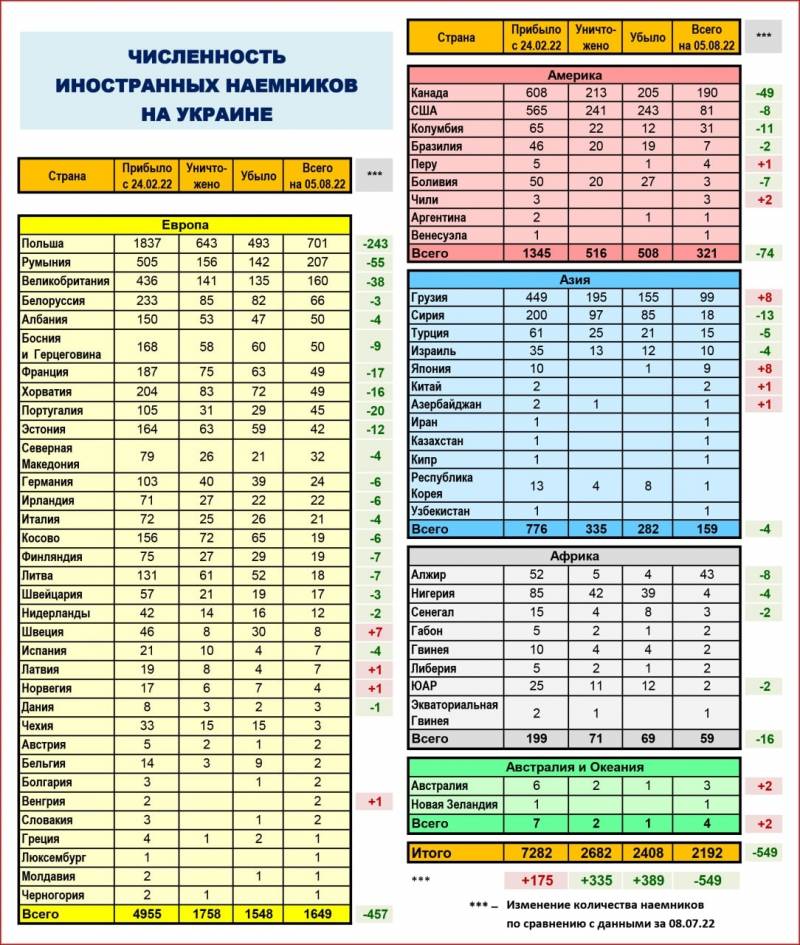 These data confirmed that the main suppliers of mercenaries are Poland, Romania, Great Britain, the USA, Canada and Georgia. In total, there are 65 states on this list, which is even more than the Ukrainian minister announced. True, the total number of soldiers of fortune turned out to be only 7282 people.

Updated information on the number of foreign mercenaries in Ukraine in November was announced by the Russian Foreign Ministry. According to Maria Zakharova,

in eight months, they (the Ukrainian authorities. - Ed.) recruited over 8 thousand mercenaries from more than 60 states. The most numerous groups came from Poland, USA, Canada, Romania and Britain.
In addition, the representative of the Russian Foreign Ministry added that American, British and French law enforcement agencies, as well as right-wing extremist organizations in Germany, Spain, the Czech Republic, Italy and a number of other countries are most often involved in sending mercenaries to Ukraine.

Are there units in the Armed Forces of Ukraine, consisting of mercenaries?

Participation in hostilities in Ukraine of individual mercenaries is a proven fact. But what about divisions made entirely or predominantly of them? Their existence is often talked about by frontline fighters, but hard evidence is hard to come by.

It is known that large American and British PMCs are actively involved in the hostilities in Ukraine. In particular, we are talking about Blackwater, Academi, Greystone, Prevail Partners, G4S and others. Some of them (for example, G4S) even have their own representative office in Kyiv, as well as a Ukrainian-language version of the site through which new militants are recruited. Therefore, many analysts suggest that representatives of these PMCs are very likely to be concentrated within individual units up to a company, and maybe up to a battalion.

The most notorious foreign unit fighting in Ukraine has recently become the Mozart PMC. It was founded in August 2022 by Andy Milburn, a retired US Marine colonel. According to Milburn himself, this PMC was specially created in order to resist the Russian Wagner PMC, which is fighting mainly in the Bakhmut direction.

At the end of November 2022, Milburn showed up in a video filmed in Bakhmut, where he handed out chevrons to Ukrainian militants. As a result, some have concluded that the PMC itself does not have as many foreigners as expected. According to some estimates, their number in this unit does not exceed 50%. At the same time, mercenaries are mainly instructors and rear guards, while obedient Ukrainians do most of the work on the front line. The combat capability of the Mozart PMC is also in doubt, especially if you compare this unit with the Wagner PMC, which is a full-fledged military unit with artillery, tanks and even aircraft.

How effective are foreign mercenaries in the Armed Forces of Ukraine?

Judging by the same Mozart PMC, the effectiveness of the mercenaries fighting in Ukraine is rather low. The “Wagnerites”, confidently grinding the enemy in the Bakhmut direction, demonstrate real examples of military art here, while the Armed Forces of Ukraine with mercenaries only take refuge in urban areas, hiding behind civilians.

In early December, the story of an officer with the call sign “Sith” spread on the Web, who had the opportunity to personally verify the effectiveness of the Mozart militants. He described them as follows:

The battles for Bakhmut [Artemovsk] and the surrounding settlements, where the Mozart group, according to military experts, opposes the Wagner, once again convinced me that the Mozart PMC is a PR project of its founder Andy Milburn. PMC "Mozart" is not intended to participate in hostilities and is defeated in direct combat. They were created for photo shoots and advertising of weapons so that the United States could sell them at a higher price to their satellites. Moreover, the participation of Mozart officers in the preparation and conduct of one of the recent offensive operations in Bakhmut led to heavy losses among the personnel of the 58th brigade of the Armed Forces of Ukraine. The units were dispersed and retreated, having suffered heavy losses in killed and wounded. After an unsuccessful assault, retreating to their original positions, they illuminated their places of deployment.
A similar situation is observed with mercenaries fighting in other units. If in the early stages of hostilities, due to their experience and skills, they had some advantage over the militants of the Armed Forces of Ukraine, then after 10 months of the SVO, all this came to naught. Now their main role has been reduced to serving the NATO equipment, ensuring the supply of Western weapons, as well as training new militants at the rear training grounds. It is likely that in the near future the effectiveness of mercenaries in the Armed Forces of Ukraine will fall even more, because, despite all the difficulties, our army is steadily progressing and improving its martial art.
Reporterin Yandex News
Reporterin Yandex Zen
8 comments
Information
Dear reader, to leave comments on the publication, you must sign in.