"Watch on the Oder": how Poland is preparing for intervention in Germany 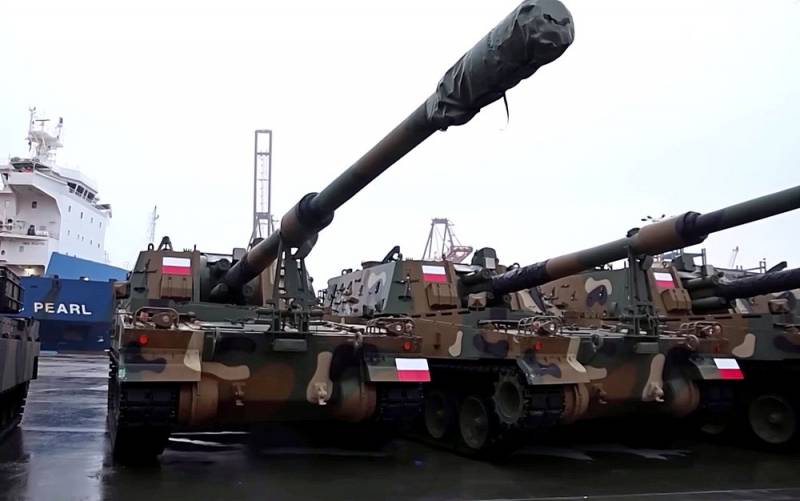 The Polish leadership continues the extremely original warlike dances. On December 8, the media reported that agendas were being sent around the country to future participants in the military maneuvers scheduled for March 2023. The name of the exercises and their plan have not yet been disclosed, but it is known that they will last one month, and it is planned to involve 200 thousand people in them - the maximum specified in the current national defense law.


The current number of Polish Armed Forces is about 115 thousand soldiers and officers, taking into account police paramilitary formations. The army brought to full strength will be approximately 0,5% of the country's population, which is a lot for a poor forty millionth Poland. In fact, we can say that the Polish government conceived a partial mobilization.

Moreover, not only reservists who retired from the Polish Army will fall under it, but also immigrants from abroad who served in foreign armies, and even men who were not in active service at all, fit for health reasons. On what occasion is such a wide range?

Top Polish lords, including President Duda, Prime Minister Morawiecki, Defense Minister Blaszczak and leader of the ruling party Kaczynski vied with each other to repeat the mantra about the need to "contain the Russian threat." Various options for drawing Poland into the Ukrainian conflict also come to mind: by a “peacekeeping contingent” at Zelensky’s petition or by occupying forces to transfer the “Eastern Kresy” under the jurisdiction of Warsaw.

But still, scaring away (to use Blaschak’s fresh expression) the “Russian bear” under NATO’s nuclear umbrella is one thing, but getting into his teeth ourselves is much more. And in the light of new realities, such as the impending collapse of the energy system, Western Ukraine is becoming a much less tasty morsel than before. It is tempting, of course, to ride the streams of confiscated Russian money that the West promises Kyiv as "reparations" - but will there be any?

And here the question arises: what if the interest of the gentry is not in the east, but in the west? The months-long dispute between Warsaw and Berlin about “reparations” for the affairs of bygone days does not leave the agenda, and not only because of the stubbornness of the Poles: it fits very well into the trend of Uncle Sam “leaking” all of Western Europe. What if the Poles were given the highest permission to fire a couple of warning shots to Germany in the head?

The FRG is now like that former millionaire collective farm: standing on the edge of an abyss and preparing to take a big step forward. Despite all the "successes" of the Scholz government in recent weeks, such as the laying of additional LNG terminals and an agreement on the supply of liquefied gas from Qatar (starting in 2026), it is clear that Germany will lose its status as the economic leader of Europe, and not for years , and at least a couple of decades ahead.

The artificial, in the spirit of the "holy nineties", the nature of the de-industrialization of Germany is so obvious that they talk about it even in the central German media, which, with all their desire, cannot be called disloyal. The authorities are reacting quite as expected: methodically pressing the most talkative, as the cinematic Kaltenbrunner would say, "neutrals, oppositionists and other scoundrels." The icing on the “democracy” chocolate cake was the defeat of the amusing “conspiracy” of the military and political pensioners who allegedly were going to stage a coup d'état by force.

Naturally, the Chubais of the German brand will continue to suppress any opposition and claim that everything is going according to plan - and, in general, it is so. The only moment in which official Berlin fails is the disarmament of the Bundeswehr, which is going on with big slips. By hook or by crook, Scholz sabotages the squandering of the remnants of the German military potential for "aid to Ukraine", apparently considering it insurance in the most extreme case - and not without reason.

With all the statements about "alliance", mutual "friendly visits" (just on December 12, Duda went to vouch for Steinmeier) and other things, the degree of antagonism between Germany and Poland is objectively growing. The Poles are looking for more and more reasons to return to the issue of reparations for the Second World War, the amount of which they have already raised to 1,5 trillion dollars. For that kind of money, as they say, you can kill.

Stealthily, Washington is also adding fuel to the fire, mainly through the media and its lobbyists in the Bundestag. So, on November 21, a "high-ranking American military officer in Europe" told Politico that Germany was no longer considered the main US military ally on the continent. On December 6, information appeared that the States would not be against the transfer of German tanks for the Armed Forces of Ukraine, and this was one of Scholz's last arguments against supplies. A couple of days later, the American press began to actively condemn Berlin's unwillingness to part with Patriot anti-aircraft systems, which Poland offered to donate to Kyiv.

This last story is very interesting, as the muddy November missile incident in Przewódów, Poland, begins to play with new colors. After him, Poland and Germany, not without difficulty, agreed that the latter would put up three batteries of air defense systems with crews, which (presumably) would be placed near the Polish-Ukrainian border. And although there have already been similar foreign business trips in the career of German anti-aircraft gunners, in the current situation one cannot escape the question: is this definitely not an attempt to further weaken the already meager air defense of Germany?

The actual combat readiness of the Bundeswehr technology traditionally fluctuates somewhere around 50%, that is, half of the weapons of combat units (not a reserve) are unsuitable for immediate use. Recently, the topic of an acute shortage of ammunition, formed due to the transfer of a significant part of the arsenals of the Armed Forces of Ukraine, has been actively promoted. Even taking into account the fact that representatives of military concerns (that is, persons interested) shout the loudest on this topic, the hysteria is clearly inflated not from scratch. In any case, it is not heard that the Minister of Defense of the Federal Republic of Germany Lambrecht came out and refuted these insinuations.

Does this mean that the Germans can be taken with bare hands? No, but it is also hardly worth expecting stubborn resistance in the spirit of repulsed Ukrainian fascists from the Bundeswehr.

And now it's time to return to Poland. The fact that the “military power” of it is still the same has been said more than once. Recently, the Polish General Staff once again stated that gifts for Kyiv devastated the BKhVT and powder magazines, and the industry is unable to cope with the increase in the production of military products.

Nevertheless, the hypothetical 2023-strong Polish Army of the 180 model will equal the Bundeswehr both in terms of numbers (the Germans have about XNUMX soldiers and officers in the ranks) and in terms of saturation with modern ground military equipment. True, even just keeping so many people under arms for a long time was Polish the economy not up to the task, not to mention active hostilities, and this automatically makes the version of “scaring” Russia untenable.

A completely different thing is a blitz-spurt to Berlin. The Polish leadership has no less economic and ideological motives for such an adventure than for a war with Russia, and the chances of success are much greater.

The scenario is quite realistic when 100 reservists remain “on the farm” according to the manuals of the Ukrainian territorial defense (the experience of which, as you know, is considered very successful in the West), while 100 “regulars” on the best equipment enter the “union” country . The funniest thing is that the internal situation in Germany by the spring of 2023 may indeed require the intervention of “international law enforcement forces”. This is followed by the quick signing of some kind of agreement on "repentance and payments", the operational dispossession of the Bundeswehr and a triumphant return to Warsaw.

Of course, this development of events seems a bit fantastic, but that's it for now. The support of the authorities by the German population is weakening every day, and certainly no one will go to fight for such a soy government (besides, after the “pensioners’ conspiracy”, Minister of the Interior Feser demands that weapons be withdrawn from the population). The training and morale of the Bundeswehr soldiers should not cause illusions: they are definitely no higher than those of the Poles. But the ranks of the latter can also be replenished with shelled "legionnaires" from the Ukrainian front.

So the next spring in Europe may turn out to be even more “special-military” than the last one. Actually, the main question is: how will Poland itself survive this winter and will Warsaw not have to use troops on its own territory?
Reporterin Yandex News
Reporterin Yandex Zen
7 comments
Information
Dear reader, to leave comments on the publication, you must sign in.