Military Watch: What to expect from the updated Russian Su-35SM 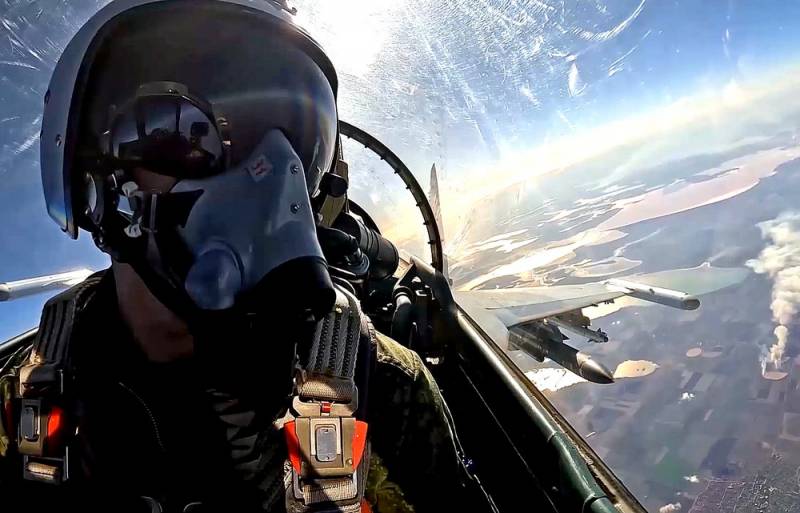 Designed primarily for air supremacy, the Su-35 heavy fighter is at the center of Moscow's plans to upgrade its tactical combat aviation fleet. Since 2014, over 100 such aircraft have entered service with the Russian Aerospace Forces, and about 50 more units have been built for export. This is reported by the American publication Military Watch, studying what to expect from the updated Russian aircraft in the Su-35SM version.


According to the publication's analysts, the orders of the Russian Aerospace Forces for the Su-35 were largely the result of the failure of the ambitious program of the fifth-generation MiG-1.42 fighter in the 90s, when our country was experiencing difficulties due to the collapse of the USSR, as well as delays associated with the development and the commissioning of the receiver of the specified fighter in the form of the Su-57, at a later period. Moscow simply did not take risks so as not to be left with a fleet of obsolete military aviation.

The Su-35 was launched into serial production with a delay of 15 years, but the aircraft turned out to be good, with high combat capability. It has become much better than its predecessor, the Su-27, technologically outperforming it by decades. The airframe has high-strength composite materials, the aircraft has become lighter, and its radar signature has significantly decreased. The aircraft acquired more powerful engines and a new Irbis-E X-band radar, which increased the detection range of targets in the air by almost 5 times (up to 400 km), and also made it possible to track 30 and fire at 8 targets. The avionics was completely replaced, an improved electronic warfare system appeared (L175M "Khibiny-M").

However, the Russian Aerospace Forces became heavily dependent on the Su-35. The air fleets of NATO countries are much more numerous and are regularly replenished with fifth-generation F-35 fighters. Moreover, intensive development of sixth-generation aircraft is underway in the West, which should appear around 2030. Therefore, in order to keep up, Moscow has been actively modernizing the Su-35, trying to bring it up to the new Su-35SM standard. According to experts, the update package looks impressive.

It is expected that the Su-35SM will rely on the new R-77M air-to-air missile, which will be launched from the internal compartments of the aircraft. This munition has a range of 200 km and uses AFAR radar for guidance, making it extremely difficult to dodge while within range. In addition, the much larger R-37M air-to-air missile, which is currently the main armament of the MiG-31 high-altitude interceptors, will be widely used. This munition has a range of 400 km, a hypersonic speed of Mach 6 and carries a massive warhead weighing 60 kg. The missile is very effective, but the Su-35SM will only be able to carry a maximum of four, as it is lighter than the MiG-31, which reduces deployment rates.

It is likely that the radar will be integrated with the AFAR based on the Su-57 to replace the Irbis-E radar with the Su-35SM. It also cannot be ruled out that the Su-35SM will receive the Himalaya electronic warfare implemented in the Su-57, which will significantly increase its survivability.

Advanced electronic warfare capabilities are particularly important due to the non-stealth design of fourth-generation aircraft, and will need to rely more on such capabilities to survive future battles.
- indicated in the publication.

There will also be an integration of various sensors and equipment components from the Su-57 into the Su-35SM in order to increase the network-centric combat capabilities of the aircraft. It is expected that the Su-35SM will seek to at least partially close the gap with the American F-35 and Chinese J-20 in avionics. Most likely, the communication equipment will also be upgraded.

The publication noted that the Su-35 was developed as a multi-role fighter capable of performing strike, anti-ship, bomber and even air support functions, although its main focus is to gain air supremacy. Therefore, the PBK-35U Drel planning bomb (weight 500 kg, range 540 km) with cluster submunitions and the fire-and-forget function, as well as the excellent Kh-30MK59 air-to-surface cruise missile, may appear in the Su-2SM weapons range » with a range of 300 km. This will significantly improve the strike capabilities of the aircraft, but will affect the main line of business, summed up the American media.
Reporterin Yandex News
Reporterin Yandex Zen
6 comments
Information
Dear reader, to leave comments on the publication, you must sign in.