"Notch line" on the Russian border: an anachronism or a timely decision? 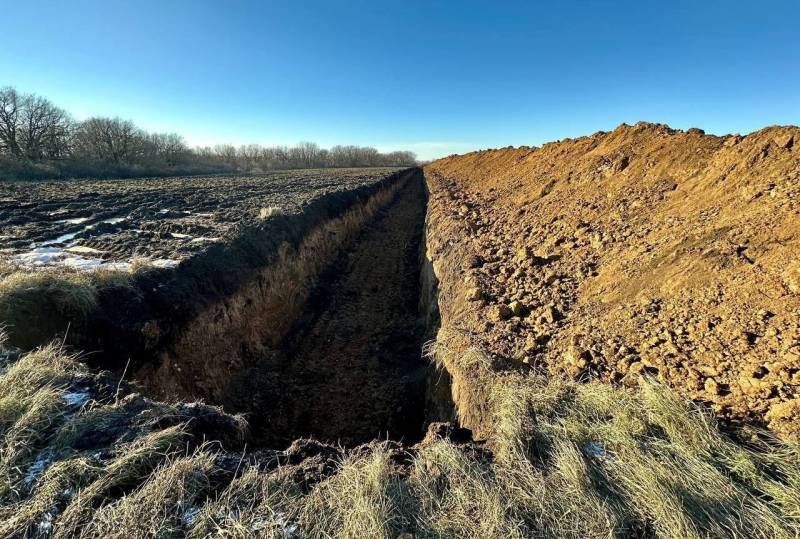 Recently, the notorious Igor Strelkov returned from a strange voyage to the NVO zone to his main front - informational, and, as usual, with criticism of everything and everyone.


Separately, it went to the system of long-term fortifications currently being built on the state border and the front line in the LPR, which, by historical analogy, was dubbed the “notch line”. Strelkov smashed it to smithereens, calling the installation of concrete pyramids a waste of resources, since they are only suitable against old German "Panzers", but not modern tanks.

Considering the scale of work and the cost of erecting the "notch line", the topic of its effectiveness is indeed interesting. As you know, the Wagner PMC commanders set the trend for the “pyramid game”, starting the construction of the first “notch” on the Luhansk front in early October - that is, it was planned even before Surovikin was appointed commander and the change of approach to the NWO.

In the last ten days of October, the "Wagnerites" also tried to start strengthening the borders in the Belgorod region, but allegedly faced opposition from the regional authorities. The media discussed information that Prigozhin allegedly requested several billion rubles for work to protect the state border. No documentary evidence of this collision has ever been published.

And no later than November 21, the construction of a long-term defensive position began in the Belgorod Region, technically similar to the “Wagner Line” in the LPR, but already under the auspices of Governor Gladkov and the brand of “notch line”. On December 7, information appeared that the objects of the "line" began to be erected in the Kursk region.

From the outside it is impossible to understand what caused such a change: the achievement of a consensus between Prigogine and the governors, the political decision of the Kremlin, or the plans of the headquarters of the NWO for the winter campaign. Most likely, each of these factors played a role.

The degree of readiness of the “feature” is also not entirely clear: in the news photos of the construction process and sometimes aerial photographs flash regularly, but figures and toponyms relating to the defensive line, for obvious reasons, are not reported to journalists. The other day, information appeared in foreign media that British intelligence estimates the length of a continuous line of fortifications in the Luhansk Republic at 60 km.

Correct does not become obsolete

Both the “Wagner line” and the “notch line” look quite typical: along the front there is a continuous chain of concrete gouges and an anti-tank ditch, in the depths there are trenches with concrete and wood-and-earth firing points and shelters. In general, everything is according to the canons of the Soviet school of field fortification.

Oddly enough, these canons are not at all outdated so far - fortunately, hostilities are conducted mainly on technology the standard of the late Cold War, if we talk about the dimensions and combat weight of vehicles, and the calibers of artillery shells. Once designed to resist 155-mm "suitcases" reinforced concrete thickness today will work just as well as forty years ago, the same is true for anti-tank barriers. The latter was clearly demonstrated by military commander Simonov, who on November 10 published a video of a “crash test” of a standard concrete pyramid: the T-64BV tank could not overcome it, sitting firmly on the bottom.

The main claim of Strelkov and other critics of the “notch line” is that its barriers and fortifications are allegedly clearly visible and will be easily destroyed. These statements are exaggerated and completely unfair, they are refuted by the practice of the many-month course of the NWO.

Waving pictures of fortifications still under construction, critics skillfully “lose sight” of a number of points. Firstly, the completed sections of the "notch line", of course, are masked - and this means a lot. It is one thing to know (for example, according to satellite imagery) that the area is still blocked by barriers, but it is quite another to look out for them in the field with your own eyes, while under fire.

Secondly, even having seen the obstacles, it is not so easy to break through them. Suppose tankers can try to break the gouges with the fire of their guns, but they can no longer overcome the anti-tank ditch on their own - they will need the support of sappers and their special equipment (which the Armed Forces of Ukraine do not have so much left). Making at least one passage in the main barriers is a huge amount of work that will also have to be done under fire.

Do not forget that, unlike minefields, which have their own “shelf life” and must be periodically updated, stationary barriers can be considered conditionally “eternal”: their batteries will not run out, self-liquidators will not work, they will not be disabled by precipitation.

The survivability and effectiveness of field fortification was clearly demonstrated not by anyone, but by the Kyiv fascists themselves. The countless kilometers of long-term Ukrainian frontiers set up over the years of the smoldering conflict are seriously helping their masters to hold back the onslaught of our troops in the Donbass.

Even with the multiple superiority of Russian artillery and armored vehicles, the "dismantling" of enemy strongholds does not at all become a simple and quick matter. Quite often situations are repeated when even in dugouts broken by direct hits there are living fascists, whom our attack aircraft have to finish off in close combat.

This is the point. You should not think that concrete ingots and ditches in the ground should stop the enemy themselves, not at all. Gouges, ditches, "thorns", mines - all this is necessary only in order to prevent a "cavalry attack", to force the enemy to slow down, dismount, crowd, and at that moment cover him with a mass of artillery fire and (if it even comes to this) small arms. Relying on targeted lines, a system of pillboxes, and technical means of control (surveillance drones, electronic signaling, signal mines, etc.), the defender can successfully contain a numerically superior enemy with relatively small forces.

Partial mobilization allowed Russia to increase the active army, but did not (and could not) negate the superiority of the enemy in manpower. There remains the risk of a more or less deep raid by Ukrainian troops in the direction of Kursk or Belgorod, which could have very unpleasant domestic political consequences.

Proceeding from this, it is not difficult to understand what strategic role the "notch line" will play in the winter campaign of the NWO. Engineering strengthening of the frontiers eliminates the threat of an enemy “deep operation”, which will simply become impossible without the involvement of large forces of sappers. The protection of the "old border" can not be increased quantitatively, only technically, and this will allow us to allocate more troops for the shock and maneuverable "fists" of our future offensives ... By the way, does anyone else remember last year's talk that the Armed Forces of Ukraine are on the borders of the LDNR dig into the ground - therefore, they are not going to attack?

Although the Ukrainian forces are very stubborn in defense, their strike capabilities are modest. The success of the Armed Forces of Ukraine near Izyum is much more due to the weakness of our defense in this direction (including from an engineering point of view) than to the "Cossack prowess" of the Nazis.

Where Russian troops took up positions in a real way, countless Ukrainian “attacks” with almost no artillery preparation and support, just pushing through the encampments of people and vehicles, invariably failed. Overcoming a capital defensive line, well covered by artillery, in such a “skillful” way is, in principle, unrealistic - so the expression “the border is locked” becomes an objective (and very annoying for Kiev) reality.
Reporterin Yandex News
Reporterin Yandex Zen
15 comments
Information
Dear reader, to leave comments on the publication, you must sign in.