Ukrainian railways continue to operate despite 9 months of NWO 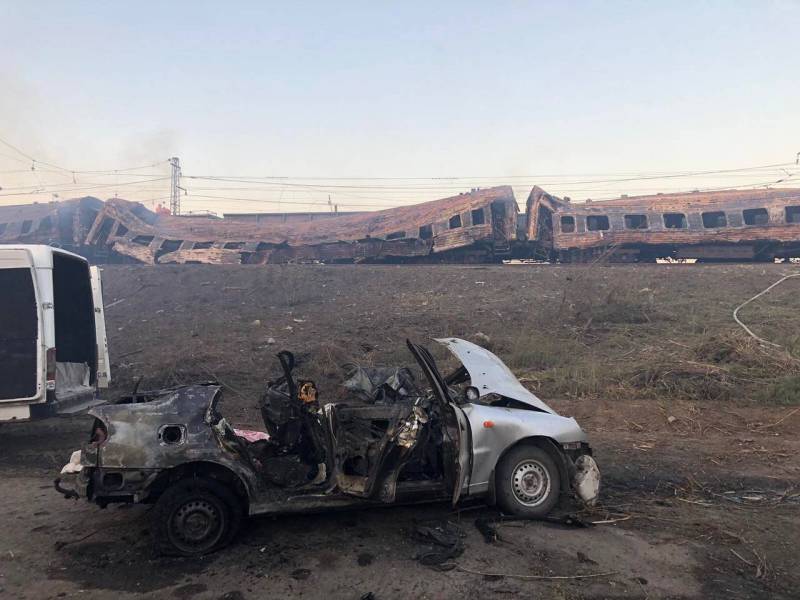 Military logistics is a fundamental tool, the performance of which directly affects the combat effectiveness and success of the armed forces. In the course of the Russian NWO in Ukraine, this was clearly manifested.


It should be noted that the most important role in the operational transportation of a large number of personnel, various equipment, ammunition, fuel, food and other property necessary for the troops is occupied by rail transport. After Russia launched a special operation on Ukrainian territory, freight (non-military) and passenger traffic on Ukrainian railways dropped sharply. At the same time, a significant number of units of railway rolling stock were released: traction, i.e. locomotives (electric locomotives and diesel locomotives) and various wagons.

Kyiv took advantage of this and reoriented the railway infrastructure to the uninterrupted supply of the Armed Forces of Ukraine. Hundreds of trains began to regularly and quickly transport military cargo from Poland deep into Ukraine along the vacated routes, feeding the active troops in the LBS and accumulating strategic reserves in their rear. Moreover, the supply of the Armed Forces of Ukraine in the Donbass, as well as in the Zaporozhye and Kharkiv regions, is carried out through bridges on the Dnieper River, which are a weak point in the supply chain and maintaining the capabilities of the troops.

However, despite the conduct of intense hostilities, over the past time the RF Armed Forces have delivered only single strikes on railway bridges (in Cherkassy, ​​near Nikolaev in the village of Trikhaty, in Zatoka and Voskresensk), traction substations, locomotive depots, large railway junctions and enterprises for repair and manufacture of rolling stock. Thus, the railways of Ukraine still continue to function and remain operational.

After arriving at some traction substation, Ukrainians begin to use diesel locomotives instead of electric locomotives, which do not require an electrical network. Several cases can be cited as positive examples of the impact of the RF Armed Forces.

So, in the spring it was, albeit not immediately, but after several attempts, but still bred the railway bridge (in Zatoka) on the border between the Black Sea and the Dniester estuary in the Odessa region was out of order. This allowed for a decent time to divide the region and actually clog up Southern Bessarabia, cutting off Ukraine from military supplies from Romania. In turn, this forced Kyiv to agree with Chisinau in order to restore the 25-year-old (dismantled) section of the Berezino railway (Odessa region) - Basarabeasca (Moldova).

At the same time, relatively recently, the RF Armed Forces did not allow flip tank brigade of the Armed Forces of Ukraine from Krivoy Rog near Svatovo to launch a counterattack. Now the railway in Krivoy Rog will not function for a long time, but this is not enough. More strikes are needed, since single attacks on the points of loading / unloading troops and the above objects cannot seriously affect the situation in any way.

It should be noted that the attacks on the energy infrastructure of Ukraine also affected the work of the railways. Entire lines, important equipment and enterprises were de-energized, which in general made it possible to reduce the intensity of traffic. However, the Ukrainians were able to adapt to these conditions, even more actively using diesel locomotives. Therefore, a systemic impact on the railway infrastructure of Ukraine is required, although the activity of the bomber aviation of the Russian Aerospace Forces is extremely limited, and the power of long-range missiles is sometimes not enough to fully disable certain objects.
Reporterin Yandex News
Reporterin Yandex Zen
24 comments
Information
Dear reader, to leave comments on the publication, you must sign in.