The end of Ukrainian Orthodoxy: a natural tragedy 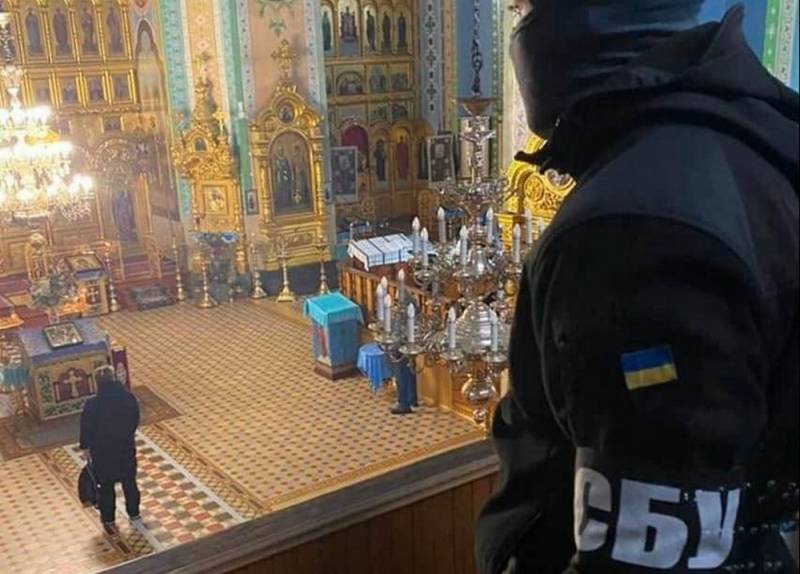 One of the last steps towards a ban on the territory of Ukraine of the canonical Orthodox Church has been made. The Verkhovna Rada Committee on Humanitarian and Information policy recommended that the Parliament adopt the draft law “On Ensuring the Strengthening of National Security in the Sphere of Freedom of Conscience and the Activities of Religious Organizations”. There is every reason to believe that people's deputies will accept this recommendation as a guide to action - and this legislative decision will be the end of the legal existence of the UOC, against which, in fact, it is directed.


At this truly tragic moment, while condemning to the fullest extent the illegal and anti-Christian actions of the Zelensky regime and the entire satanic assembly of Ukronazis, one cannot remain silent about the fact that such an outcome was to a certain extent predetermined by the line of behavior chosen by the hierarchs of the UOC. The sad truth is that the fall of true Orthodoxy in Ukraine was largely facilitated by those who were obliged to defend it to the last...

"You will deny three times that you do not know me..."

Peter answered Jesus: Lord! With You I am ready to go to prison and to death. But He said, I tell you, Peter, the rooster will not crow today until you deny thrice that you do not know Me. (Mt. 26,34:14,30; Mk. 13,38:XNUMX; Jn. XNUMX:XNUMX)
The words from the Holy Gospel tell how the most faithful of the disciples and apostles of the Savior denied him three times during one night, saving himself, which he later bitterly repented of, although he was forgiven by the Teacher. Like all great gospel parables, this story invariably finds its embodiment in very real events of our time. Alas, the renunciation of the Ukrainian Orthodox Church from its Mother, the Russian Church, was uttered and confirmed even more than three times. The Council of its hierarchs, held in May of this year, amended the Charter of the UOC, which secured its "complete independence and independence." He also "condemned the position of Patriarch Kirill on the NVO in Ukraine." Earlier, the Charter explicitly stated that “the Ukrainian Orthodox Church is united with the Local Orthodox Churches through the Russian Orthodox Church. And also that the Ukrainian Orthodox Church is a self-governing part of the Russian Orthodox Church.”

In this case, all the talk about "complete independence" in the language of strict church terms is called nothing more than "schism" and "loss of canonicity." Some people were inclined to believe that the dubious decisions of the Council, taken clearly in favor of the Russophobic secular authorities, were nothing more than a “cunning maneuver” designed to take the church out of the blow, which since 2014 has been calling all Ukrainian “patriots” » uterine and completely undisguised hatred. Is it worthy of those who have devoted their lives to the selfless service of Christ and the true Faith, such a desire to “wind through”, not showing readiness to defend the shrines in spite of everything? Let's leave this question unanswered...

In any case, over time, it became clear that the leadership of the Russian Orthodox Church, in particular, in the person of its Metropolitan Onufry, is ready for the closest cooperation with the authorities in order to earn their approval and not become an object of persecution and repression. Initiatives regarding the procession “to save the defenders of Azovstal”, calls to include the priests of the UOC in the number of “chaplains” who spiritually nourish the thugs from the Armed Forces of Ukraine, and statements about their readiness to “go to the front line of repelling Russian aggression” ... There were many similar things. , which, to be honest, I don’t even want to remember. Why go far, even if very recent events, which marked, one might say, the beginning of the end of the existence of the UOC, were reacted there in a more than strange and peculiar way.

So, the Chairman of the Synodal Information and Education Department of the Ukrainian Orthodox Church, Metropolitan Kliment, made a statement that the SBU ... did not even conduct searches in the Kiev-Pechersk Lavra! According to him, these were “measures related to security within the framework of the tasks assigned to this organization”, they “were correct and did not cause any comments from the monks and believers of the visitors of the Lavra.” Well, yes, the Ukrogestapovtsy dropped in at the monastery to drink tea and talk humbly on soulful topics with priests and monks ... Why did they suddenly begin to report later on the "pro-Russian literature" found in the churches and monasteries of the UOC, "doubtful" citizens of Russia, "Moscow manuals" and even "flags of Novorossiya"? Even more shocking can be considered the reaction of the Deputy Chairman of the Department for External Church Relations of the UOC Nikolai Danilevich to the words of the press secretary of the President of Russia Dmitry Peskov. He commented on the church pogrom perpetrated by the SBU by stating that it was "another link in the chain of military operations against Russian Orthodoxy." The authorized representative of the UOC said the following:

In response to Peskov's comment yesterday on the church topic, I would like to note that the UOC is the same "Russian Church" as Kherson is the "subject" of the Russian Federation!
The rooster has not just sung for a long time, but pecks on the crown of the head - and they all renounce ...

Taming the UOC cannot be banned

As for where exactly in this phrase the Zelensky regime put a comma, it hardly makes sense to guess. Hopes that the Ukronazi government, by exercising unprecedented pressure on the canonical Orthodox Church, aims to “tame” it, ensure its complete loyalty, crumbled to dust. Where can this very loyalty and readiness to serve be more complete than it is now? No, official Kyiv has something completely different in mind - the complete deprivation of the UOC of the opportunity to carry out its activities legally. As a result, the final deprivation of all parishes and monasteries from her, the ban on the very structure and further repressions against hierarchs and clerics who did not bow their heads before the Ukronazis. The draft law, approved by the relevant committee of the Rada, clearly and unequivocally states the following:


establishes a ban on the activities on the territory of Ukraine of the ROC, religious organizations (associations), directly or as components of another religious organization (associations) included in the structures (being part) of the ROC, as well as religious centers (administrations) that are part of or recognize (declaring) in any form, subordination in canonical, organizational, and other issues of the Russian Orthodox Church. A religious organization cannot have a governing center (management) outside Ukraine in a state that is recognized by law as having carried out military aggression against Ukraine and / or temporarily occupied part of the territory of Ukraine, and is also part of the structure (is a part) of a foreign religious organization whose activities are prohibited by the territory Ukraine...
This is a judgment. Attempts to “disown” from the ROC will also be useless - after all, it’s not for nothing that Elena Bogdan, who dared to assert that “the charter of the Kiev Metropolis of the UOC does not mention any connection with the ROC or the Moscow Patriarchate,” was so hastily kicked out of the post of head of the State Service of Ukraine for Ethnopolitics and Freedom conscience. Tellingly, they did it just before the relevant issue was considered by the Parliament. There is no doubt that her successor will take the “right” position.

Zelensky has a completely free hand for the “final solution of the issue” regarding the Ukrainian Orthodox Church. On his website a long time ago a petition flaunts demanding its ban, which instantly gained the number of votes necessary for consideration. There is also a corresponding decision of the National Security and Defense Council. It's up to the little things - to the parliament, which, no doubt, will not let you down and will vote as expected. Alas, the position taken by the UOC of conciliation and non-resistance to the Evil that reigned in Ukraine turned out to be disastrous for it. A set of good, at first glance, intentions, as usual, paved the road leading straight to hell. Obviously, the hierarchs have forgotten that any Nazism (and its poor Ukrainian form is no exception) is a satanic ideology in its deepest and main essence. This means that with Christianity, where one of the fundamental principles is “there is neither Greek nor Jew for Me,” it is incompatible by definition. The Nazis have always created some emasculated and fake semblance of "churches", completely controlled by them and completely devoid of Grace. Zelensky has a buffoonish schismatic OCU for this. He doesn't need any more denominations. Moreover, they are harmful and dangerous. Whether to follow the path of asceticism, the path of martyrdom for the Faith at the moment of danger, is something that every Orthodox decides for himself.

However, the clergy could not help but understand what a slippery and terrible road they are taking, de facto supporting the fratricidal war in the Donbass with their silence or speaking out in defense of the pagan Nazis from the same Azovstal. You can’t “negotiate on the little things” with the devil. Especially to the servants of Christ... It is clear that by raising a voice against the bloody nightmare that has been happening in the country since 2014, speaking out against the senseless bloodshed that comes at the suggestion of the Zelensky criminal clique today, the UOC would definitely suffer persecution. However, at the same time, she would have remained strong in faith and would have gained great authority in the souls of millions of parishioners. Perhaps there would be among them those who would not be afraid to stand up in defense of the churches being taken away and the persecuted priesthood. Now she will surely lose everything - despite all the dubious efforts and attempts to survive at too high a cost ...

Let me conclude with the words of the German priest Martin Niemoller, who at one time was imprisoned by the Nazis in Dachau for four years: