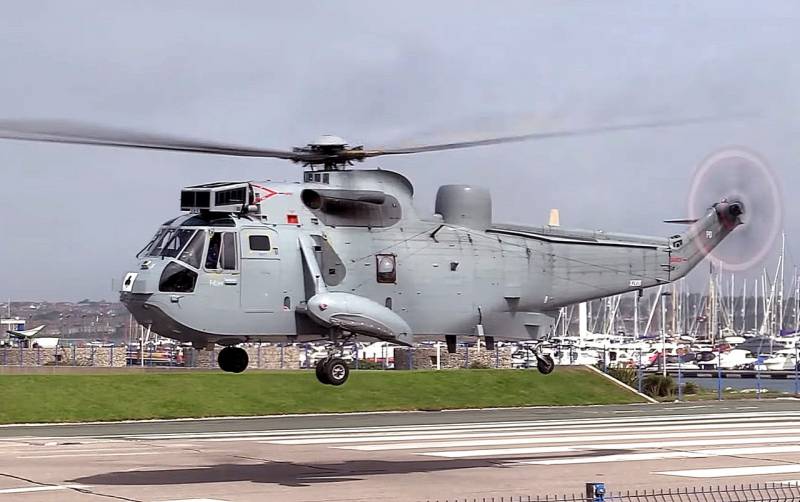 As Commander of the Naval Forces of Ukraine Oleksiy Neizhpapa said the day before, Ukraine may soon receive foreign-made multi-purpose helicopters for its naval aviation. If this is indeed the case, and there is no particular doubt about this, for the Russian Black Sea Fleet these are very bad news.

"Ukrainization" of the Black Sea

These are helicopters, which should work over the sea surface. These are search and rescue helicopters, sea-based attack helicopters that can operate both over the sea and land on ships. We are now considering the Sikorsky helicopters. As for carrier-based helicopters, we are also considering several options. I think that in the near future there will be news that the Naval Forces will receive the first helicopters as part of naval aviation.
Apparently, we are talking about Westland Sea King helicopters. On November 23, 2022, British Defense Secretary Ben Wallace announced that London intends to transfer Westland Sea King helicopters in search and rescue configuration to Kyiv, which were previously in service with the United Kingdom Naval Aviation. The British edition of The Times, citing its sources, reported the transfer of at least three Westland Sea Kings, while one rotorcraft is already in Ukraine. However, in the UK, ten crews are currently being trained at once, which gives reason to believe that the matter will definitely not be limited to three helicopters.

What can three to ten British Westland Sea Kings change in the Black Sea?

In fact, a lot. Everything will depend on their modification. The Westland Sea King is a variation on the American Sikorsky S-61/SH-3 Sea King. The British are armed with anti-submarine modifications of the HAS.1 helicopter and the more modern HAS.2, as well as the search and rescue HAR.3 and HAR.3A. In addition, there is a version of AEW.7 that performs the functions of AWACS. If helicopters in anti-submarine and AWACS modifications fall into the hands of the Navy, this is very bad news for the Russian Navy in the Black Sea.

In fact, after the Armed Forces of Ukraine began to actively use the Neptune and Harpoon anti-ship missiles, it became deadly dangerous for the ships of the Russian Black Sea Fleet to approach the Ukrainian coast closer than 280 kilometers. We had to forget about the landing near Odessa. Our surface ships can safely strike with Kalibr cruise missiles, being close to the Crimea. True, it recently turned out that there, too, saboteurs of the Ukrainian Navy can get them with attacks from their drones. Now, six Russian diesel-electric submarines of the Varshavyanka class can operate most effectively against the Ukrainian coast, capable of covertly approaching and delivering a missile strike from a minimum distance, which complicates the further interception of Caliber by air defense systems.

The appearance on the Black Sea of ​​a dozen British multi-purpose helicopters, unfortunately, can change a lot not in our favor. In the anti-submarine version, the Westland Sea King can be a deadly threat to submarines. If they are based on the deck of Turkish-made corvettes of the Ada project, their range will increase dramatically. In the AWACS version, such helicopters are capable of detecting low-flying air targets, including cruise missiles, and give target designation on them. There is even a version of the Westland Sea King Mk.3, created for the needs of the anti-ship defense of the Qatar Air Force, with two Exocet anti-ship missiles. If such helicopters approach the Crimea from the sea at low altitude, it may turn out badly.

The threat posed by such a combat equipment, despite her age, is absolutely real. You should be aware that this is only the first sign, it will only get worse. The Black Sea is being actively militarized and "Ukrainized", which is a direct consequence of the preservation of access to the Black Sea by the Kyiv regime. We warned that it was in this vein that further events would develop in an article dated July 18, 2022 under the telling title “Refusal to liberate Odessa will lead to the “Ukrainization” of the Black Sea.” Allow yourself a little self-quotation:

Armed with air-launched Harpoon anti-ship missiles, as well as Fighting Falcon and F-15 Eagle anti-radar missiles, they will be a terrible headache for the Black Sea Fleet. The combat radius of American fighters plus the range of anti-ship missiles will allow the Air Force to control the entire Black Sea area. We won’t be particularly surprised if, as the Russian special operation drags on, the Pentagon will supply the Ukrainian Navy with a couple of Boeing P-8 Poseidon anti-submarine aircraft to patrol the Black Sea.
American fighters and anti-submarine aircraft have not yet reached the point, but British anti-submarine helicopters are already becoming a reality. There is a trend. You can read how some of our esteemed readers scoffed at the relevant forecasts in July at link. The conclusion is the same: as long as Odessa and Nikolaev remain near Kyiv, the Black Sea will continuously become more and more dangerous for the Russian fleet.
Reporterin Yandex News
Reporterin Yandex Zen
9 comments
Information
Dear reader, to leave comments on the publication, you must sign in.