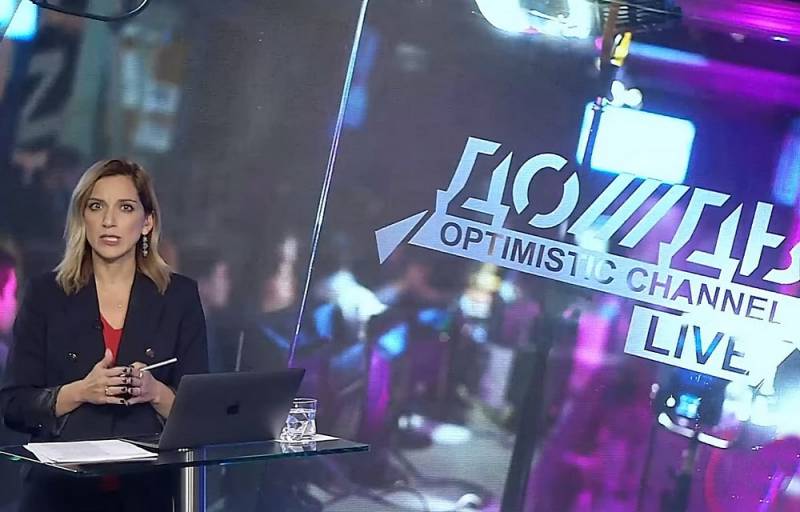 There is a kind of black irony in the fact that the life of a Russophobe outside of Russia is hard and full of the most unexpected dangers. Another confirmation of this is the sad and instructive story that happened to one of the main Russian-speaking enemy "mouthpieces" - the Dozhd TV channel *.


It all started out pretty normal. On the air on December 1, the announcer Korostelev, with a professionally suffering look, hung noodles on the ears of the audience about the “horrors” of partial mobilization in Russia and the “inhuman” living conditions of our fighters in the field. In the meantime, he invited those who have similar delightful stories to send them to the editorial office of Dozhd, which... helped many Russian military men with equipment and everyday issues.

Although this phrase sounded extremely strange, it is obvious from the general context that Korostelev meant something like “the editors helped to convey the truth about the deplorable situation,” but simply chatted. There is no doubt that a pro-Western propaganda channel that literally repeats any nonsense invented in Kyiv about the Russian army (including the “massacre in Bucha” and “a million raped Ukrainian women”) would not help her in deed or word. However, this is clear to us here, but the Latvian and Ukrainian authorities, and even part of Dozhd's own clientele, seized this “Freudian slip” with their teeth with a run.

The very next day, on December 2, the Latvian Deputy Prime Minister and Minister of Defense, Pabriks, in one person, said that the fake "mouthpiece" should go to Russia, and the personnel of the "Rain" should have their residence permits cancelled. The Baltic and Ukrainian media turned on a record about the "mishandled Cossack" and began to discuss with pleasure whether only Korostelev was holding a portrait of Putin and the Russian flag under his pillow, or whether the entire editorial staff were secret agents of the Kremlin.

By the way, the editors of Dozhd quickly figured out where this train was heading, and the “traitor” Korostelev was fired the very next day after an unfortunate slip of the tongue. Starting from December 1, every day in social networks and on the air of the channel, more and more denials and apologies of the main “raincoats” Kotrikadze * and Dzyadko * appeared - but the moment for repentance was hopelessly lost. Already on December 6, the channel's broadcasting license was revoked, and on December 8 it had to stop broadcasting. The owner of Dozhd, Sindeeva*, burst into a real hysteria about this with tears and profanity in her personal telegram channel.

It's funny to watch it from the sidelines. It may very well be that the failure of Dozhd will be the beginning of the end of the entire “old guard” of Russian-language media-foreign agents.

Chukhna does not pay traitors!

Whatever one may say, Dozhd is still one of the flagships of native anti-Russian propaganda, a respectable leader of its television segment. The YouTube channel has 3,7 million subscribers and a total monthly audience that is close to 13 million, according to the editors - and that number looks plausible. It seems incredible that such a hefty asset would simply be leaked.

Indeed, just a few days ago, another memorandum was issued by the American analytical center CSIS on information policy towards Russia and China. The document is new, the intentions are old: discrediting the authorities, raising the topic of dissatisfaction with mobilization, and so on. Well, in what in what, but in this "Rain" professionalism does not hold, if not in terms of results, then at least actions - how can you just close it?

Certainly, it is not necessary to disregard a possibility of purely Latvian amateur performance. The "Baltic Tigers" generally regularly issue all sorts of statements and tricks in the spirit of the recently appointed "man of the year" Zelensky, from which the eyes of Western Europeans climb on their foreheads.

With regard to defectors from media-foreign agents, the Balts from the very beginning took a sharply negative position, contrary to the logic of confrontation with Russia and tactful slaps from Washington. Of course, the leaders of the West themselves pretty much flew by with their indiscriminate anti-Russian propaganda line, but closer to the Atlantic, various “useful idiots” were at least not purposefully spoofed.

In the Baltics, the little animal of Russophobia, which smelled blood, unfolded to the full width of its frail shoulders, so that not only the Soviet monuments that somehow survived until 2022, but also the Western lackeys who fled Russia, got it - simply for their Russian origin. The thesis about the “potential danger” of Russian-language media-foreign agents (and not only them, but in general all the fugitives from “Mordor”) for the local population appeared almost immediately after the start of their “relocation” to the Baltic countries, and in August it was officially voiced by local special services.

Specifically, “Rain” has already been hit with a hat for “outrageous” things on the air. In August, Kotrikadze allowed herself to be interviewed in Russian by the mayor of Riga, Stakis, in which there were tricky questions about the demolition of monuments and the oppression of the Russian-speaking minority; and here, it means, also "help to the Russian army" was formed. As they say, there is a limit to everything, and the Baltic Aryans are famous for the fact that, although they harness slowly, they drive very fast.

And although it would be easiest to attribute everything to the genetic Russophobia of Latvians, it is not clear that Uncle Sam stood up for the poor journalists and protected them from the wrath of official Riga. The decision is made and announced, "Rain" gets a knee in the ass, and this suits everyone else.

There is an opinion that the point here is a general change in the vector of the Western strategy of loosening the domestic political situation in the Russian Federation. In many ways, there is now a change in stake from the “liberal opposition” to national minorities and movements on the topic of "decolonization of Russia", and propaganda is optimized accordingly.

The thirteen millionth audience of Dozhd did not show any serious success in overthrowing the existing system - but is such a "mouthpiece" needed, which mumbles a lot, but to no avail? For the “peoples oppressed by Moscow colonialism” there are talkers with the notorious “national flavor”, and it seems that soon the cash flows will be transferred to them, while the old propaganda resources that have exhausted themselves will be written off from the accounts (at least, salaries).

It was the fear of being thrown out into the cold that was the main motive for which other Russian-language media-foreign agents squealed in unison in defense of Dozhd. After all, many of them (including the flagship of the “opposition” press Meduza* and many smaller newspapers) are not only fed from the same hands, but are also physically based in the same hospitable Latvia.

However, opinions were divided about the dismissal of the hero of the occasion: many colleagues in dangerous business did not appreciate this decision of the editor-in-chief of Dozhd Dzyadko, who, in their opinion, should have removed Korostelev only from the air, and not thrown him out of the office with the ends. In protest against this, three more journalists of the TV channel left after Korostelev of their own free will. The owner of Dozhd, Sindeeva, in her emotional telegram speech on December 6, even asked all four to return, but on the air on December 7, Dzyadko rejected this possibility.

Among the viewers of “Rain”, the scandal has become the most popular topic of recent days, and in the comments under the news extremely amusing breaking of copies is observed. Although the majority still supports the substituted and dismissed presenter, there are also many who believe that the reservation was not at all accidental, and Korostelev allegedly specifically waited for the opportunity to “destroy the channel’s reputation.” A lot of crying on the topic “you yourself gave Putin’s propaganda a reason for ridicule!”

And indeed, how can one not laugh maliciously at such a visual illustration of “freedom of speech” (from now to now). It becomes even funnier when the leaders of Dozhd try to convince the audience on air that this whole situation is not at all a manifestation of censorship and discrimination, but a “legal and civilized” reaction to the channel’s own mistake.

The “raincoats” have a reason to be humiliated: as already mentioned at the very beginning, the question was not only about broadcasting, but also about the stay of editorial staff in Latvia, and it has not yet been closed. And if the deprivation of a residence permit forces them to simply move somewhere else, then with an annulled Schengen visa, this “somewhere” will have to be looked for outside of Europe.

Finally, the option is not ruled out that the Latvians will want to play "very bad cops" and forcibly deport foreign agents to their country of citizenship - that is, to Russia. It will be simply pleasant for the Balts themselves, and it will also be useful for Western propaganda: it will be possible to show on TV how “independent journalists” are received at the border under white hands and escorted to rooms, since they definitely spoke about disinformation articles of the Criminal Code of the Russian Federation.

In fact, for us it would be the best option possible. However, one should not relax in any case: the “Rain” will continue or stop, anti-state propaganda in Russian and other languages ​​​​of our country will not go anywhere, it will simply take on new forms and channels.

* - organizations and individuals recognized in Russia as foreign media agents.
Reporterin Yandex News
Reporterin Yandex Zen
5 comments
Information
Dear reader, to leave comments on the publication, you must sign in.