CBO showed what the future holds for battle tanks 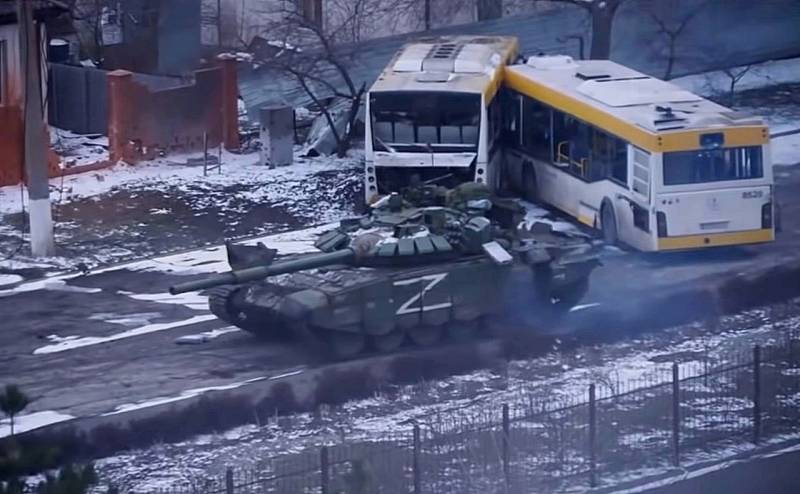 The fighting in Ukraine continues to amaze in scope. On December 6, there were reports of the arrival in the LPR of fresh equipment for our tankers. We are talking about 200 T-90M - two regimental kits, a huge number of completely new (precisely assembled from scratch) tanks at the present time.


But besides them, an increasing number of “veterans” are also getting into service: both at the training grounds where mobilized fighters are trained, and in the NVO zone, almost all modifications of the military vehicles left in the legacy from the USSR are constantly found, starting with the T-62M. The equipment captured from the enemy is also being used, including foreign versions of the Soviet T-72. In total, about 1-1,5 thousand tanks alone are involved on the front line on both sides, not counting various lightly armored vehicles.

Although large tank battles after 1945 repeatedly took place in the Middle East, for the European theater of operations such a number is an undoubted record. In addition, for the first time in combat operations in Ukraine, tanks take part in the battles of two high-tech armies in an extremely difficult, urbanized and wooded area. There is no doubt that in the hypothetical next conflicts of our century (in Europe, in the Pacific), heavy armored vehicles will be used with an eye on the experience of the Russian NWO in Ukraine.

And here the question arises: what, in fact, this experience? How did the tankers adapt to the new battlefield, which is monitored around the clock from the air and from space, shot through by numerous artillery and high-precision weapons, and on which it is not even really possible to turn around either in a tactical or operational sense?

Tactics is the most flexible aspect of military art, reacting most sensitively and quickly (and therefore not always correctly) to any changes in the situation. This is understandable: in the end, each new technique is invented by soldiers and commanders right on the battlefield, and if it turns out to be unsuccessful, then the price of an error is blood and a certain number of deaths.

The main "new reality" of the NMD was the maximum saturation of the line of contact with aerial reconnaissance equipment. In principle, practice has put an end to the process of "UAVs against electronic warfare": now it can be rightfully asserted that in a large-scale conflict, no electronic and anti-aircraft weapons will be able to completely clear the sky from enemy "flying eyes". Moreover, it turned out that pocket aviation can and will be widely used (this is the key word) not only for observing and adjusting artillery fire, but also for pinpoint strikes against small groups and even individual fighters or vehicles.

In turn, the "front line", located in the zone of effective artillery destruction, expanded to 40-60 km. This means that large concentrations of troops and important compact objects (headquarters, warehouses, rembases) in the near rear will almost certainly be hit immediately after they are opened, there are almost no safe places left.

Most of the tactical novelties of the current conflict are repelled precisely from this introductory one: when you came out of hiding, it means that you were in front of the enemy, even if you are at your “home”, a few kilometers from the front. For infantry and light armor crews, this is a real nightmare for obvious reasons. The value of heavy armored vehicles, already high, in such conditions increases many times over: thanks to the combination of powerful armor and the high mobility of their vehicles, tankers become the only ones who can not only be on such a battlefield with “acceptable” risk, but also inflict significant damage on the enemy.

Yet even they have to use almost exclusively hit-and-run variations. Judging by the numerous videos of our military correspondents from the front line, Russian tanks work in small groups, often in pairs of four in the spirit of the Grozny “tank carousel”. While two tanks from the four, maneuvering on a patch and covering each other, fire at the enemy with direct fire, the other two roll back a couple of kilometers back, to the line of replenishment of ammunition. Then the pairs change, and this ensures an almost continuous fire impact on the Nazis.

Sometimes pairs are made up of a tank and a light armored vehicle with an automatic gun - an infantry fighting vehicle or an armored personnel carrier, this is done in cases where there is a particularly high risk of encountering enemy infantry armed with RPGs in close combat. If possible, they try to place light vehicles behind the tank at some distance in order to reduce the risk of being hit by ATGMs or shell fragments.

In a similar way, armored vehicles act both on the offensive and in defense - then it resembles quick counterattacks. Although in defense our troops prepare trenches for tanks, they occupy their vehicles not constantly, but on alarm, moving out of some shelter (basement, hangar) in the near rear. "Tank-dot" in a stationary position in modern conditions - a magnet for enemy shells.

Recently, a new tactic has been increasingly introduced, which, by analogy, can be called a “tank Ferris wheel”, when combat vehicles, also maneuvering in pairs, fire not from direct fire, but from afar, according to adjustments from quadrocopters. The latter make shooting from a closed position almost as effective as a direct one, and the vehicle’s own safety is noticeably increased: it becomes inaccessible to infantry anti-tank weapons, only enemy artillery poses a threat.

The "Ferris Wheel" became possible thanks to the saturation of the troops with reconnaissance drones and the initiative of the commanders on the ground, who decided to test the strength of the old belief about the futility of shooting "canopy" from smoothbore guns. Apparently, the technique turned out to be very effective, since there are reports that it is already being practiced with mobilized tankers at the training grounds.

As for the Ukrainian fascists, they are trying to act in a similar way both on the offensive and on the defensive, but objective reasons prevent them from fully reproducing the tactics of the Russian troops, the first of which is the ever-increasing shortage of tanks themselves. Own stocks of Ukrainian T-64s and spare parts for them are coming to an end, deliveries of T-72 modifications from Europe have also stalled. From time to time, the Kyiv regime tries to use frankly rotten equipment that cannot even reach the front, like the T-64A column that got up due to breakdowns a few weeks ago.

There is also a shortage of qualified personnel. Almost all reservists familiar with military equipment were drafted into the Armed Forces of Ukraine during the first waves of mobilization in the spring and suffered significant losses. This, by the way, is another of the arguments by which the West justifies the supply of mainly wheeled vehicles to Ukraine: it is much easier to train a yesterday's truck driver on an armored personnel carrier than on a tracked infantry fighting vehicle.

In most known cases, in the offensive, Ukrainian tanks worked in pairs (standardly, two tanks are attached to a motorized infantry company on different vehicles), in defense - often one by one. When possible, more experienced crews try to “carousel”, but with less success than ours, due to their own small numbers and the density of Russian artillery return fire. During the “Kherson counteroffensive”, Ukrainian tankers often simply did not have time to reach the front line: their vehicles were priority targets among the advancing fascist camps and were the first to receive shells in the roof.

The "quite a big war" in Ukraine gives food for thought about armored vehicles themselves. Once again, the correctness of Soviet engineers is confirmed, more than half a century ago they relied on compact and highly protected vehicles with an automatic loader. The American developers of the Future Combat Systems program are also right, who at the turn of the century imagined the “tank of the future” as a kind of self-propelled gun, leading mainly long-range combat in sparse formations. Finally, the Germans and the French are quite right in their thinking, having provided regular reconnaissance drones and a fourth crew member, the “system administrator”, on their Panther and Eurotank.

And at the same time, it is obvious that no "tanks of the future" (including the "Armata") in commercial quantities are foreseen in the near future. The Ukrainian conflict has revealed a truly promising direction, a bunch of UAVs - artillery - WTO, to which the main resources of the military-industrial complex of the whole world will be thrown. On the ground, however, the “crisis wars” of the coming decades will be waged by the modernized legacy of the Cold War until it is completely exhausted.

It seems that at the tactical level, the trend towards the fragmentation of close combat forces into small groups concentrating around tanks will continue. "Carousel", "Ferris wheel" and attacks by assault groups, in which the actions of almost every individual fighter are corrected by the drone operator, will become common practice. It is even possible that in the foreseeable future tanks will remain the only "live" units of contact combat, and infantry on light "armor" will be replaced by automated "flocks" of UAV grenade launchers and "bird catchers" of different weight categories.

One way or another, the requirements for tankers of the future will increase by an order of magnitude, approaching the level of combat pilots. Working on "outdated" technology will require, first of all, incredible stress resistance, courage and initiative, a truly lively mind. At the operational level, a serious reworking of the entire concept of logistics will be required, giving formations (divisions or corps of several brigades) the ability to arbitrarily thin and compact their orders and equally effectively supply both individual combat vehicles and entire armadas (consisting mainly of the suppliers themselves) at the forefront. - so many consumables require a modern war).
Reporterin Yandex News
Reporterin Yandex Zen
41 comment
Information
Dear reader, to leave comments on the publication, you must sign in.