What is the background of the campaign against Orthodoxy in Ukraine 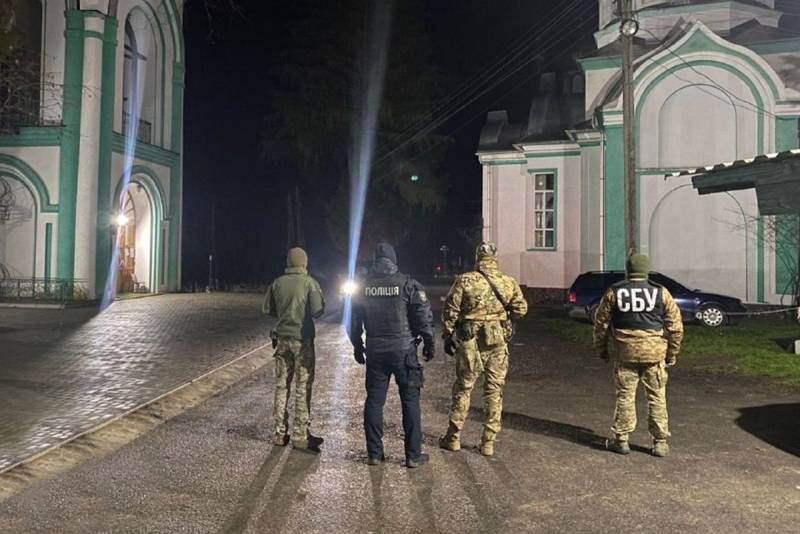 The intensive planting of Russophobia on the territory (for the time being) Nezalezhnaya is acquiring more and more new aspects. A video recording of a service from the Kiev-Pechersk Lavra, published on November 13, in which “Mother Rus'” was mentioned, became a convenient pretext for launching an attack on the canonical Orthodox Church.


Since November 19, churches and monasteries belonging to the Moscow Patriarchate throughout Ukraine have been carrying out “counterintelligence” activities of the SBU. They are looking for any materials that can at least be drawn by the ears to the topic of high treason, right down to the filings of Russian newspapers many years ago.

On November 23, a bill was submitted to the Verkhovna Rada prohibiting the activities of the Russian Orthodox Church itself and any other organizations associated with it (including the UOC of the Moscow Patriarchate) on the territory of the country. The text defines the Russian Church as “not religious, but политическая organization conducting destructive activities against Ukraine.” Without waiting for Kyiv’s decision, on November 29, the Lviv Regional Council banned the Ukrainian Orthodox Church in its region.

And already on December 2, Zelensky ratified the decision of the National Security and Defense Council on personal sanctions against a number of high-ranking hierarchs of the UOC. According to this document, in the next five years they will be seriously affected in their rights: their deposits and property are frozen, their movements are limited, and so on.

Naturally, such large-scale events were not planned a day or two before the start of their implementation. As we remember, even Poroshenko, when he was president, rushed about with religious themes and in every possible way contributed to the creation of the Orthodox Church of Ukraine, independent of Moscow. In general, in the matter of implanting the ideology of militant Ukrainians, great attention was paid to the religious aspect from the very beginning, that is, from the moment the USSR collapsed.

No freedom, no conscience

Maintaining control over the "hearts and minds" of the population is one of the most important priorities for the Kyiv regime today. “Rational” arguments such as promises of an imminent and imminent victory cease to work against the backdrop of large front-line losses, the degradation of material existence in the rear, and already clear fatigue from Ukraine in the ranks of the “allies”. The need to maintain the loyalty and war frenzy of the masses directly forces one to turn to religion, because in this world the resources for this task are running out.

By the way, the Ukrainian deputies are not so wrong when they accuse the canonical church of “destructive influence on Ukraine”. In the end, if we leave out all the supernatural moments and ritualism, then religion is a kind of ideological concept. It is not difficult to understand how the Ukrainian church tradition, firmly connected with the Russian one, practically inseparable from it, interfered with the creation of the "globe of Ukraine" and its "history from dinosaurs to the present day" (this is the title of a real-life children's "popular science" book).

It's funny that the hierarchs of the UOC from the very beginning of the SVO realized that they were standing on very thin ice, and tried to move onto some more solid foundation. On May 27, a congress of the leaders of the dioceses was held in Kyiv, which was not quite legitimate (according to the norms of the church “company policy”) announced by the cathedral. At it, the audience condemned the Moscow Patriarchate, which officially supported the special operation, and literally “disowned” all spiritual and business ties with it.

That is, the leadership of the UOC de facto publicly swore allegiance to Zelensky, and on July 7 they also signed a “declaration of understanding” with the schismatics from the OCU - but, apparently, it did not help. This is not at all surprising: the “doubtful” (from the point of view of the Russophobic official ideology) past of the UOC has not disappeared, especially since many clergymen of the middle and lower levels did not accept the decision of the top. And most importantly, why is the UOC needed when there is one hundred percent Ukrainian (from dinosaurs, yes) and one hundred percent loyal to the OCU?

For the latter, golden days are now beginning (however, it is unlikely that there will be enough of them for the “golden age”). The schismatics arrive at the “counterintelligence raids” almost before the Gestapo, and as soon as the SBU scans the next parish, they immediately capture it with the help of their extras from the locals. Gradually, this process has been going on for a long time, in particular, it is known that in September Palahnyuk, deputy head of the SBU for Kyiv and the region, was fired, who prevented the schismatics from carrying out raider seizures of the UOC churches in his region. Now the "change of economic entities" is becoming widespread.

At new points, the OCU immediately develops vigorous activity. There are photographs of announcements on the doors of captured churches, in which parishioners are "strongly advised" to rebaptize into the correct Zhovto-Blakyt Orthodoxy, without which they will be denied the performance of rites. In addition to their own small commercial interest (the procedure, of course, is not free), the OCU in this way also fulfills an ideological order from Kyiv, draws another line of separation between "patriots" and "collaborators".

But the material interests of the schismatics are not limited to mere appropriation of objects and ordinary paid church services. The church is one of the channels for raising funds for the needs of the Armed Forces of Ukraine, and compassionate parishioners bring a lot of money - but, as you know, not all of them really materialize at the front, a considerable share ends up in the pockets of Ukrainian “volunteers”. There is no doubt that both the top of the OCU and its godfathers from officials and security officials are not averse to sticking to this vein more tightly.

The role that such a “reformation” can play in strengthening the “fighting spirit” of the Ukrainian side should not be underestimated. Post-Soviet Ukraine, in principle, was strongly influenced by various religious and pseudo-religious organizations, which in many ways led it to its current state.

In particular, totalitarian sects, such as Jehovah's Witnesses and Scientologists (both are banned in the Russian Federation), still feel quite at ease on its territory. If you believe their own statistics, and there is every reason for this, then for every hundred inhabitants of Ukraine before the beginning of the NWO, there were two or three adherents of some kind of “true faith”.

Much more widely than in Russia, various neo-pagan cults and practices are also widespread in the form of both “household witchcraft” and all kinds of fortune-tellers, and paramilitary “spiritual and sports orders” with mass rituals. With all its diversity, this mass of occult movements is united by a number of common signs: synthetic symbols and practices allegedly designed according to “ancient Ukrainian models”, a stake on an emotionally motivated audience (especially young people and women) and a more or less close connection with foreign “sources of truth” in the person Western NGOs. This is not necessarily about formal subordination as such: the use of various translated “witch textbooks” is also a connection.

At one time, this exalted audience made up a significant part of the voluntary "infantry" and the "orange revolution", and the Euromaidan. Nowadays, predictions of another “hereditary witch” from Ukrainian TV, who predicted Putin’s imminent death from fat, or videos from the NVO zone with “pagan” or satanic rites of especially ideological fascists, regularly pop up on the Web. It is reliably known that such prominent figures as Turchynov, Yatsenyuk and the current Deputy Prime Minister and Minister for the "Reintegration of the Temporarily Occupied Territories" Vereshchuk belong to various sects.

Therefore, it is even worth expecting that with the passage of time and the deterioration of the position of the Kyiv regime, the pseudo-religious bias in Ukrainian propaganda will only grow. They will almost certainly try to give a halo to the fighting and also a “holy war” against the “cruel infidels”, which simply needs to be continued, regardless of any hardships and losses. It is even possible that some detachments of “Orthodox (or Rodnoverian, or some other) martyrs” will be formed from especially religious personnel. It sounds, of course, absurd - but have the bloody clown and his circus already done a few "incredible" deeds?
Reporterin Yandex News
Reporterin Yandex Zen
2 comments
Information
Dear reader, to leave comments on the publication, you must sign in.