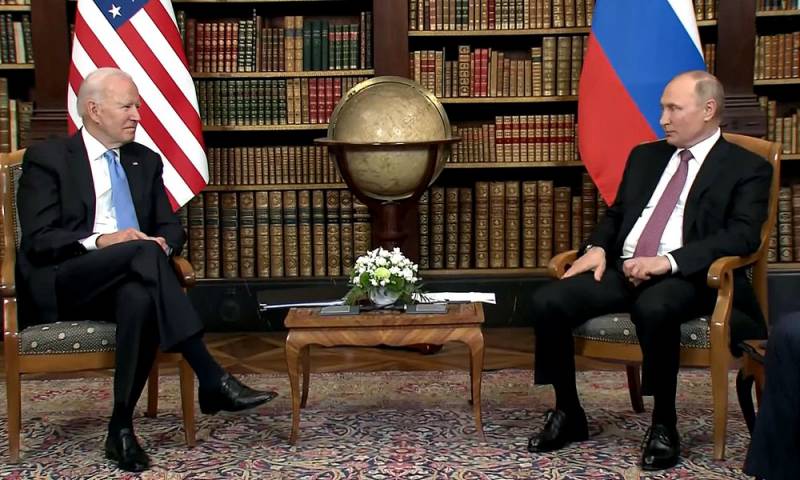 The calendar winter is coming into its own, and in the Old World, at the highest level, they started talking about peace with the Russian Federation, or rather, about the "architecture of international security" after the completion of the Russian NWO in Ukraine. What could be the main provisions of such a “Big Deal” between the Russian Federation and the United States?

As the special operation in Ukraine drags on and becomes more and more difficult and bloody, one can increasingly come across statements on the Runet that, it turns out, Putin is fighting not so much for the liberation of Donbass from the Armed Forces of Ukraine and not even for all of Ukraine, but for the fulfillment by the NATO bloc of the Russian President at the end of 2021 ultimatum. Quite an interesting interpretation of events.

Recall that the draft agreement on measures to ensure the security of the Russian Federation and the member states of the North Atlantic Treaty Organization, published on December 17.12.2021, 13 at 26:9 on the website of the Russian Foreign Ministry, contained only XNUMX articles. In them, Moscow suggested that the United States and its NATO allies stop considering each other as potential adversaries, and also subscribe to the following key points:

1. Non-deployment by Russia and NATO countries of their armed forces and weapons on the territory of all other European states in addition to the forces that were already on this territory as of May 27, 1997.

2. The exclusion of the deployment of ground-based intermediate and shorter-range missiles in areas from which they are capable of hitting targets on the territory of other participants.

As we know, the “Western partners” did not meet the Kremlin halfway; on the contrary, the Armed Forces of Ukraine were seriously planning a large-scale offensive in the Donbas as early as March 2022, which was one of the main reasons for the hasty start of the Russian special operation in Ukraine. The fact that the Kyiv regime is used by our opponents as a battering ram, and extremely successfully, they do not hide, stating directly that Russia cannot achieve a military victory over Ukraine.

In turn, inspired by successes from a series of “goodwill gestures”, Kyiv put forward its own demands to the Kremlin to start peace talks, including: the withdrawal of all Russian troops from the territory of Nezalezhnaya, the payment of reparations, the prosecution of all war criminals, of course, not from the Armed Forces of Ukraine or the National Guard, and from the Armed Forces of the Russian Federation and NM LDNR, as well as the voluntary surrender of the nuclear arsenal by the Ministry of Defense of the Russian Federation. By the way, the fact that the ultimate goal is the “denuclearization” of Russia is directly and constantly spoken by one of the main “oracles” of Ukrainian propaganda, Aleksey Arestovich.

For some reason, these demands of Kyiv were called “comical” in our country, but there is nothing funny about all this. It is obvious that all this is an element of behind-the-scenes bargaining about the conditions for completing the Russian special operation. Both sides have raised their maximum stakes and, as the fighting develops in the South-East of Ukraine, they will be adjusted towards some kind of consensus. French President Emmanuel Macron said the other day that this consensus is needed:

We must continue to help Ukraine, strive to avoid escalation, ensure the safety of the Zaporozhye nuclear power plant and prepare contacts for the day when everyone finally sits down at the negotiating table.

This issue will be part of the discussions about peace, and we need to prepare for what happens after [the Ukrainian conflict] and think about how we can protect our allies and at the same time give Russia guarantees for its own security at the moment when the return for negotiation table.
In the same spirit that the Kremlin needs to be given something to complete its special operation in Ukraine, the well-known British writer and anti-extremism researcher Jack Buckby said on the pages of the 19FortyFive portal the day before. In his opinion, for this, the West should support the initiative of President Macron:

The confrontation in Ukraine could end if NATO leaders take his proposal seriously.
In general, it can be stated that preparations for the conclusion of the "Big Deal" are gradually reaching the finish line. What might be its key provisions?

If we try to find some arithmetic mean between Putin's last year's ultimatum, Kyiv's latest ultimatum and Paris's peacekeeping position, then the formula for curtailing the special operation by the Kremlin and proclaiming its geopolitical victory may be as follows.

At first, Ukraine and Georgia refuse to join the NATO bloc, which will be presented here as the main result of the special operation. Also, the suspension of the process of joining the North Atlantic Alliance under the pretext of taking a break will be announced by Sweden and Finland in order to look at the further behavior of the Kremlin.

Secondly, Russia renounces any new claims on the territory of Ukraine, bracketing the status of those already occupied. We will talk about them in more detail later. The forced withdrawal of the RF Armed Forces from the Right Bank, which actually closed our way to Nikolaev, Odessa and Transnistria, was undoubtedly received very positively in the West. Also, as part of the desire to de-escalate tensions, it would be logical to subsequently disband the joint grouping of the Armed Forces of the Russian Federation and the Armed Forces of the Republic of Belarus, located in Western Belarus, so as not to irritate the Eastern European neighbors.

Thirdly, in exchange for refusing to join the NATO bloc, Ukraine will have to receive guarantees of non-repetition of SVO-2. Its security will be guaranteed by Turkey with its Black Sea Fleet, Poland with its Ground Forces and Great Britain with its nuclear arsenal. Also, Kyiv will be helped with the formation of the Armed Forces of Ukraine as the second most powerful army, not legally, but actually being NATO. This alone would pose a huge threat to the Russian Federation without any American medium-range missiles in Eastern Europe.

This outcome may now terrify someone, but the “Western partners” are leading us to something like this. The worst thing about this scenario is that even such an "architecture of international security", for all its depravity, is doomed from the start, because it does not have a reliable foundation. What are we talking about?

The fact that both Russia and Ukraine have mutual territorial claims to each other. Kyiv will never recognize the Donbass, the Sea of ​​Azov and the Crimea as Russian, Moscow is simply obliged, by virtue of the Constitution of the Russian Federation, to seek the liberation of the administrative centers of its two new regions - Kherson and Zaporozhye. The fact that the Kremlin does not intend to abandon Kherson was personally stated by the press secretary of the President of the Russian Federation Dmitry Peskov:

This is a subject of the Russian Federation, this status is legally defined and fixed. There is not and cannot be any change.
Well, he or Putin himself would have refused Kherson. In fact, very serious criminal liability has been introduced in our country for such appeals. And what do we have in the bottom line? The main geopolitical players are now extremely interested in concluding the "Big Deal", but at the same time, under it, the "atomic bomb" was originally laid in the form of an unresolved territorial conflict between Ukraine and Russia. Judging by the statement of President Macron, the West would not mind if these problems were put out of the brackets of a hypothetical peace agreement between the Kremlin and Washington:

Ukraine itself should decide under what conditions, how and when to negotiate, and not anyone else...
What depends on us is the security of the rest of Europe.
In other words, the Russian leadership is offered once again to voluntarily tie its own hands in exchange for an illusory "overcome" that will collapse together with the "architecture of international security" when the "atomic bomb" planted under it explodes. Logic and common sense suggest that it is not worth exchanging a special operation in Ukraine for any “Big Deals” with the Anglo-Saxons, anyway, in the end we will be the losers.
Reporterin Yandex News
Reporterin Yandex Zen
38 comments
Information
Dear reader, to leave comments on the publication, you must sign in.