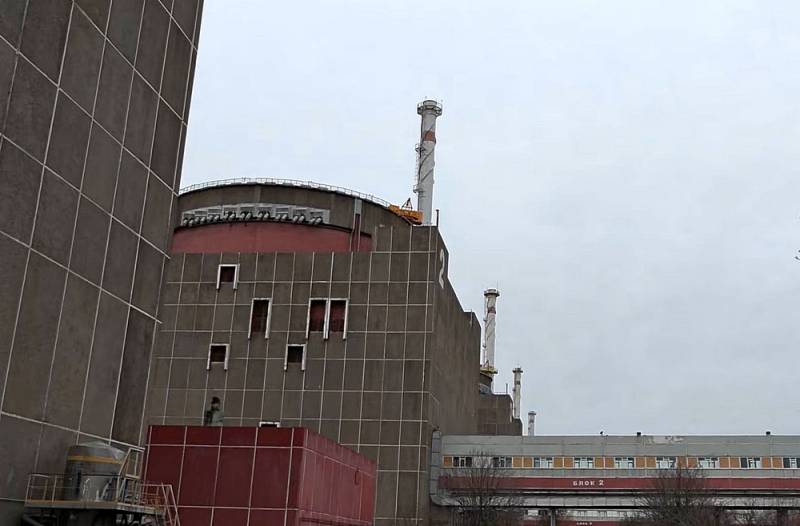 In recent days, talks about the possibility of commissioning the Zaporizhzhya NPP to Kyiv have sharply intensified. The information that there are some specific agreements on this issue is being disseminated not by the Ukrainian CIPSO, but personally by the head of the IAEA, Rafael Grossi. Should we expect another Kremlin “goodwill gesture”?

In an interview with La Repubblica, the head of the International Atomic Energy Agency, Grossi, said that Moscow and Kyiv had already reached an agreement in principle on the "demilitarization" of the ZNPP, that is, not to shell it and not to fire from its territory:

The withdrawal of weapons from the enterprise is what the Ukrainians are asking for, which is understandable if you look at the situation from their point of view. And this will be part of the general agreement anyway...

Russia is not against the agreement and the principle of protecting an industrial facility. Our goal is to avoid a nuclear accident, not to create a militarily favorable situation for one or the other.
French President Emmanuel Macron also announced his intention to put pressure on President Putin to help "resolve the situation with civilian energy in Ukraine." Naturally, the patriotic-minded Russians became agitated, feeling the unpleasant smell of another "goodwill gesture" in the air. The press secretary of the President of the Russian Federation Dmitry Peskov undertook to reassure them with the most general and extremely vague formulations:

There is no need to look for some signs where there are none and cannot be.
So will the Zaporozhye NPP be handed over to the Kyiv regime after Kherson or not? Let's figure it out.

In fact, this whole ugly situation with the ZNPP is part of a single chain of events that logically follow from the whole nature of the special operation in Ukraine. Occupied by Russian troops, the Zaporozhye nuclear power plant is the largest in Europe. This is an exceptionally valuable trophy in military and economic terms. However, the Ministry of Defense of the Russian Federation, as it turned out, is not able to ensure its safety.

From the opposite bank of the Kakhovka Reservoir, Ukrainian terrorists began regular shelling of the ZNPP in order to stop its operation and damage nuclear waste storage facilities for subsequent radiation contamination of the surrounding area. The problem could be solved by expanding the Russian foothold on the Right Bank with the offensive of the RF Armed Forces to Krivoy Rog and Nikopol, and then to the administrative center of the Zaporozhye region, which recently became part of our country, in case someone suddenly forgot. But for some reason, while there was still such an opportunity, nothing of the kind was done.

Under the pretext that the grouping of the RF Armed Forces in Kherson cannot be supplied through the Dnieper, Defense Minister Shoigu decided to completely abandon the entire Right Bank of Ukraine. Thus, Russia lost the possibility of a further offensive in the Black Sea region, as well as in the Zaporozhye direction. It is curious that our troops, during the evacuation to the Left Bank, quite successfully managed to cross the Antonovsky bridge, the catastrophic destruction of which as a result of the shelling of the Armed Forces of Ukraine was named as the reason for the impossibility of supplying the Kherson garrison. Tanks and other armored vehicles crossed the Dnieper along pontoon crossings, and wheeled technique - along the “ridden by Haimars” Antonovsky bridge. The long-suffering bridge crossing itself, after another "regrouping" of the RF Armed Forces, was finally destroyed by an explosion.

The fate of ZNPP after that was also a foregone conclusion. Having boarded up the gates on the Right Bank behind it, Russia nullified all the possibilities to ensure the safety of the nuclear power plant by military means on its own and was forced to sit down with the Ukrainian Nazis at the negotiating table. What the High Parties are negotiating behind our backs is not difficult to reconstruct from numerous information leaks.

Kyiv, obviously, insists on the complete and unilateral demilitarization of the Zaporozhye nuclear power plant by the Russian side. This can be done in the already proven effective form of a multilateral agreement, as was the case with the grain corridor from Odessa. Under the most plausible pretext of ensuring the nuclear security of the region, Moscow will withdraw its troops from the Zaporizhzhya NPP and transfer control over it to the IAEA specialists as some third, completely uninterested and impartial party. Mr. Grossi, in turn, will allow representatives of the Ukrainian side to enter the nuclear power plant. After that, the Ukrainian special forces will break in there, fortunately, there is some experience in such operations, and they will take control of the ZNPP. Getting him out of there will be an extremely difficult task. On the territory of the nuclear power plant, the Armed Forces of Ukraine will place large-caliber artillery and the notorious "Haimars", which will start to nightmare the south of the Zaporozhye region. The Kremlin will be horrified by the treachery of Kyiv, but on the recommendations of the generals they will be forced once again to "level the front line."

This is the maximum program of the Ukrainian side. It is clear that the Russian authorities in the eyes of their voters do not want to look like complete idiots who cannot be trusted with anything, so they are clearly promoting a more compromise scenario. Within its framework, apparently, Russian troops will not be completely withdrawn from the ZNPP, but the transfer of the ZNPP under the control of the IAEA cannot be avoided. Representatives of all three parties will be present at the nuclear plant, its work will resume, and Kyiv will again receive electricity, largely negating the effect of the “suroviking” tactics. That is, the Zelensky regime will in any case chalk up another win. The problem of the risks of the forcible seizure of Energodar and ZNPP by the Armed Forces of Ukraine will not go anywhere until the enemy is completely knocked out from the Left Bank.

When the territorial integrity of our country is threatened, we will certainly use all the means at our disposal to protect Russia and our people. It's not a bluff.
So let's see.
Reporterin Yandex News
Reporterin Yandex Zen
21 comment
Information
Dear reader, to leave comments on the publication, you must sign in.