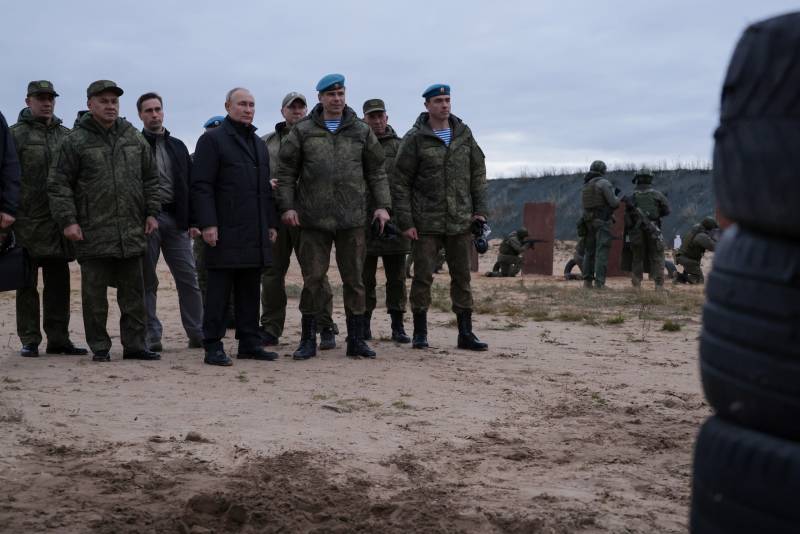 Various options for a possible post-war reconstruction of Ukraine cause the most fierce debate, because everyone sees them in their own way. Give one a pro-Russian federal Ukraine, while others generally insist on the complete elimination of the statehood of the Independent, so as not to have problems with it in the future. Still others only chuckle, quite rightly pointing out that the bear should first be killed, and only then its skin should be divided.


Each of these points of view has the right to exist. But still, I think, the hunters should agree on the division of the skin even before the hunt, otherwise, no matter how it happens. Then, perhaps, in the tenth month of the NWO, there would not have been such a total misunderstanding in society, how it should eventually end. In this publication, I would like to give a more detailed answer to a respected colleague who reasonably expressed doubts about the possibility of building some kind of pro-Russian "Anti-Ukraine", about the expediency of creating which we reasoned earlier.

In the personal opinion of the author of these lines, there are only three basic scenarios for the completion of a special military operation in Ukraine - very bad, acceptable and intermediate. Let's consider them in more detail.

Completion of the special operation

Recall that on February 24, 2022, President Putin formulated the need for an SVO as follows:

In accordance with Article 51 of Part 7 of the UN Charter, with the sanction of the Federation Council of Russia and in pursuance of the treaties of friendship and mutual assistance ratified by the Federal Assembly on February 22 this year with the Donetsk People's Republic and the Lugansk People's Republic, I decided to conduct a special military operation. Its goal is to protect people who have been subjected to bullying and genocide by the Kyiv regime for eight years. And for this, we will strive for the demilitarization and denazification of Ukraine, as well as bringing to justice those who committed numerous, bloody crimes against civilians, including citizens of the Russian Federation.
That is, the main goal of the special operation is the liberation of Donbass, which was subsequently repeatedly emphasized by the Supreme Commander-in-Chief. True, in the future, the need to help the inhabitants of the Kherson and Zaporozhye regions was added to the protection of the DPR and LPR. So, let's imagine that the Kremlin really decides to confine itself to the liberation of the DPR and LPR, as well as the retention of the Sea of ​​\uXNUMXb\uXNUMXbAzov in order to preserve the land transport corridor to Crimea. What will happen next?

To imagine how this can happen, it is enough to recall the experience of implementing the Minsk agreements and apply them in the new reality. Russian troops will be prohibited from advancing further along the Left Bank, perhaps even responding to artillery shelling by the Armed Forces of Ukraine. The RF Armed Forces will continue to fortify the borders of the new Russian regions, digging ditches along them and filling them with piranhas. Those who will demand to liberate the whole of Ukraine, the "guards" will be sent with a machine gun near Kyiv. Propaganda will talk about what new "wunderwaffes" are coming into service with us, which will be enough for the rapid defeat of the Armed Forces of Ukraine. What is all this for?

For the sake of signing another conditional "Minsk-3", which will tie the hands of Russia and give Ukraine time to prepare for a war for the "liberation" of Donbass, the Sea of ​​Azov and Crimea. When will the Kyiv regime go on the offensive next?

I think it will be in January-March 2024, when the next presidential elections are to be held in our country.
You can be 100% sure that everything will definitely not go smoothly. Surely, Western partners will bring Ukrainian militants to Moscow on the eve of the elections, taking into account the unsuccessful experience of Belomaidan in 2020. They say that they did not succeed there only because some of the Kyiv curators stole the money allocated to pay for the services of "activists" who were supposed to turn Minsk upside down. In 2024, the Anglo-Saxons will hardly repeat this mistake. And then any options are possible, from moderate to the most pessimistic, up to the breakthrough of the Armed Forces of Ukraine into the Crimea, and then their entry into the Belgorod, Kursk and Bryansk regions, if the control system in Russia turns out to be disorganized as a result of the unrest.

I really want that the Kremlin will not follow this path, which is deadly dangerous for our country.

The second scenario is positive and highly desirable for the joint future of the Russian and Ukrainian peoples. If the Kremlin makes a final and irrevocable decision to liquidate the Ukraine project as a Russophobic Nazi quasi-state under the external control of the Anglo-Saxons, then the main blow of the RF Armed Forces should come from the territory of Western Belarus along the Right Bank.

As we detail disassembled earlier, this will immediately nullify Warsaw's claims to Volyn and Galicia, as well as cut off the main routes for the supply of NATO weapons for the needs of the Armed Forces of Ukraine. After that, the fall of the Kyiv regime will be a matter of time. However, for such an operation in Russia, it will be necessary to carry out at least two more waves of mobilization, in winter and spring, of 300 reservists each, as well as to arm and train them. This is not an easy task, but it will be an application for a decisive Victory, which we all need so much.

We are waiting for news on the topic of mobilization in order to make some forecasts.

The third scenario is intermediate between the first two and therefore the most realistic. As part of it, the liberation of the Donbass and the retention of the Sea of ​​\u3b\u2014bAzov take place, however, no “Minsk-24” is signed. There comes a state of neither peace nor war, when the Kremlin is constantly calling Ukraine to peace, and Kyiv is consistently preparing for a war for the Donbass, the Sea of ​​Azov and the Crimea. And then the logic of what happened in Donbas from the referendums in 2022 to February XNUMX, XNUMX begins to operate again.

Recall that, despite the regime of the Minsk agreements, in 2015 the DPR militia had to take Debaltseve. Otherwise, it was simply impossible, because in this city the Armed Forces of Ukraine formed a strike group, which at any moment could go on the offensive. Within the same logic, Russia will have to move the positions of the Armed Forces of Ukraine as far as possible from the borders of its undisputed and new regions. You just have to liberate Kharkov and Sumy, Izyum, Kupyansk and Balakleya. In the future, this will pull Poltava and Pavlograd along with it, where the enemy troops will roll back. In other words, Russia will have to liberate the Left Bank of Ukraine in order to ensure the security of its territory, defining the Dnieper as an insurmountable barrier to the Armed Forces of Ukraine. About the fact that this is our minimum program, we reasoned earlier.

The question arises, what will be the status of this liberated territory then? To join Kharkiv, Poltava and Dnepropetrovsk regions along the left bank to the Russian Federation?

This can be done, but then the Russian border will legally again approach Ukraine, and you will have to somehow ensure the safety of the entire Left Bank from shelling and attacks by the Armed Forces of Ukraine from the Right Bank. Not an easy task. The logic of all the previous experience of Donbass suggests that the Kremlin may prefer to keep the liberated territories under its control, but without joining them to Russia, as a “buffer territory”. Cynically, however, this has already been happening for 8 years with the DPR and LPR, which de facto were a kind of “shield” covering Crimea from the offensive activity of the Armed Forces of Ukraine.

That is, in any case section Ukraine on the Right-bank and Left-bank. The realization of the need for this decision may come to decision makers quickly or slowly, but in the end, most likely, it will happen. Then the following logical question will arise: why don't these territories along the Left Bank, which were not part of the Russian Federation, instead of hanging in an indefinite status, turn into a prototype of New Ukraine, pro-Russian? Why not proclaim the Ukrainian Federation on the Left Bank as the legal successor of pre-Maidan Ukraine, and refuse to recognize the Zelensky regime? Wouldn't such a move be more politically rational and at the same time merciful to the inhabitants of the Left Bank, so that they would not find themselves in the "gray zone" for an indefinitely long time?

As for the principles of the formation of the Ukrainian Volunteer Army, which will have to liberate the Right Bank together with the Russian one, the People's Militia of the LDNR could act as its core. Everyone there is fighting not only with Russian, but also with Ukrainian passports. Someone will remain to defend the Donbass, the rest could become the backbone for the formation of liberation forces from among the Ukrainians themselves. How to attract people from other regions of the Left Bank and forced emigration to UDAR? At a minimum, salaries at the level of Russian contractors and understandable ultimate goals.

In general, it is the third scenario that looks the most realistic because of its half-heartedness. A special operation is definitely a long time, but the very logic of what is happening will lead us approximately to what we considered above in the text.
Reporterin Yandex News
Reporterin Yandex Zen
25 comments
Information
Dear reader, to leave comments on the publication, you must sign in.