"Attacks" against Ukrainian embassies in Europe: a new provocation by Kyiv or something else? 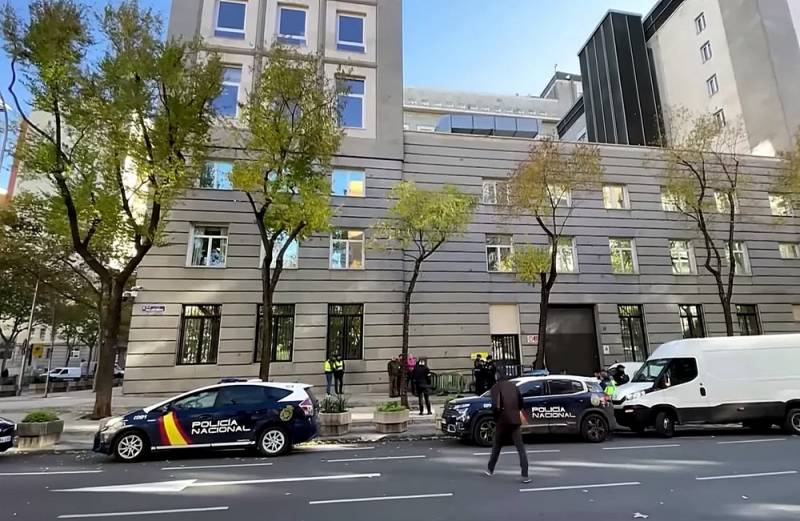 In the outgoing week, Ukrainian diplomats all over Europe suddenly turned out to be characters in interesting stories, as if from pulp fiction. On November 30, a sabotage occurred at the Ukrainian Embassy in Spain: an envelope exploded right in the hands of one of the mission employees, causing him minor injuries. On December 1, the same parcels were found in the office of the weapons company Instalaza, at the Torrejon de Ardoz military airfield, in the building of the Spanish Ministry of Defense, in the reception room of Prime Minister Sanchez and in the American embassy.


On December 2, everything became even more curious: Ukrainian diplomatic missions in several European countries at once (Poland, Czech Republic, Hungary, Croatia, Italy and Holland) simultaneously received “letters of happiness” with ... calf and pig eyes inside. It was reported that the embassy in Madrid was again cordoned off by the police, apparently due to fears about another bomb, but it never turned up. But in Greece, a garage belonging to an employee of the Italian diplomatic mission was thrown with bottles of combustible mixture, as a result of a fire, one car burned down and another was damaged.

The Ukrainian side, of course, immediately found the Kremlin's fingerprints both on the envelopes and on the delicacies inside. On December 2, Ukraine's Foreign Minister Kuleba told CNN that the mailing of letters with bombs was in the spirit of a "Russian terrorist state."

However, who is actually behind these terrorist attacks is another question, interesting, but not easy.

The first suspicions, which is not surprising, fall on the Ukrainians themselves: their desperate desire, even with a carcass, even with a stuffed animal, is very well known, but to drag NATO into a direct conflict with Russia. Could it be assumed that after the “Pshevodovsky aerial flight” and slaps from Biden himself, the ingenious Kyiv schemers would moderate their ardor a little? No, one could be sure that they would not be moderated: reprimands were reprimands, but the muddy matter was still hushed up by the whole world.

It can be said that after the “jamb” with the rocket, they decided to take the path of least risk, so that they could show the “grin of the aggressor” again and not get their pants dirty, which is why most of the incidents occurred on Ukrainian territory. Although here we are again faced with a popular character - a boy who may not have been.

The fact is that the first explosion, the rest of the bombs in envelopes and the arson of the Italian diplomat’s car were ironically fixed by local policemen - but we only know about letters with “big ears” from the words of Ukrainian officials, who, as you know, cannot lie at an organic level . They tell downright Tarantino stories about “parcels soaked in blood and characteristically smelling”, while not a single photo could be found in the foreign press - and after all, such game simply could not help but shoot ... be it reality.

True, the Ukrainian side has someone to blame. Another interesting story in the spirit of crime thrillers happened the previous week. In response to the initiative of the European Parliament on November 22 to recognize the Wagner PMC as a terrorist organization, Prigozhin's representatives handed over (or rather, as if they were handed over) a sledgehammer with the company's official symbols and bloody prints on the handle to the Brussels officials. A video that appeared on November 24 with the “transfer” of this sledgehammer in a case from under the guitar gained some popularity in social networks.

For his part, the return “present” to Prigozhin was made by the Minister of Foreign Affairs of Estonia, Reinsalu. On November 26, he published a video message in which he took out handcuffs from a case and stated that they were prepared specifically for the founder of the PMC.

Of course, you can just laugh at these cute, a little late for Halloween pranks ... But you can also remember about the unenviable fate of the Wagnerian defector Nuzhin, who was killed under a video protocol in early November: after all, unknown people caught him not just anywhere, but right in Kyiv, and they killed him in a very “cinematic” way.

Could the Main Intelligence Directorate or the SBU work in a similar vein a la the series "Octopus" in order to then blame everything on "Putin's bloody mercenaries"? Yes, easily, in something, and in this kind of art, Ukrainians show undoubted creativity. By the way, in the neighborhood, the wife of the Ukrainian Fuhrer is personally trying to spin the record about the “million raped Ukrainian women” in a new way, and then they brought letters with pig ears.

Could the parcels with "crackers" be the operation of the Russian residency? Technically - quite, but with the motivation of the problem. It is obvious that by intimidating individual Spanish officials, Russia would not have achieved anything significant (Spain is far from the largest donor for Ukraine and the Armed Forces of Ukraine), so this version can be considered untenable.

But there is one more.

Is it possible to assume that the European underground resistance movement is “training on cats” in this way? Yes, it is quite.

The conditional “European nationalist” has already formed specific claims against his own government, the Americans and their Ukrainian proxies. The change in tone of protests in the EU countries, which occurred after the Nord Stream bombing, is characteristic: now the demonstrators are less and less demanding to lower prices and / or raise wages, since this has become objectively impossible, and more and more often - to throw out of Europe the star-striped and yellow-striped Blakit's "heroes of the occasion".

The Ukrainian "rabies" have already been hit repeatedly, and partly deservedly so: too many of them behave too defiantly for the orphans and wretched "victims of Russian aggression." There are cases when buildings, in which settlers from Ukraine compactly lived, were painted with swastikas and inscriptions like “no Ukrainian language”, or even set on fire. The Western media, nodding at the graffiti, accused the local fascists - but in fact it was the locals who branded the Ukrainians as fascists.

But Kyiv diplomats behave even more boorishly than most ordinary refugees: when they are visiting, they manage to beg and broadcast mud at the hosts at the same time. Until now, the former Ukrainian ambassador to Berlin, Melnyk, who managed to say a lot of things about Germany and the Germans, and almost threw ridges on the air of German TV, does not disappear from the screens. But Melnyk, promoted to Deputy Foreign Minister, is not at all unique in terms of his “courtesy”, but only the first among equals from the Ukrainian diplomatic corps, the rest behave a little more “politely”.

After this, it’s not hard to believe that some underground group or even a whole network decided to tickle the nerves of the yellow-Blakyt “messengers” and their European “friends” a little: despite all the efforts of soy European propaganda, not everyone is ready to endure national humiliation, especially from some bankrupt Ukraine. Indirectly in favor of this version is the localization of incidents with bombs and arson - the south of Europe, known both for the hot temperament of the inhabitants there, and for the long tradition of various extremist movements, both youth and "respectable".

characteristic December 2 incident near Alexandroupoli: the train from the American did not have time to derail (again, it is not clear, spontaneously or with someone's help), when the Greek communists already unfolded their banners at the accident site demanding the expulsion of the Americans. Therefore, I am almost one hundred percent sure that the car belonging to the diplomat in Athens was burned by some other local radicals.

The investigation into the cracker envelopes is still ongoing, and the results will be revealing. If the mysterious "postman" really turns out to be from the right-wing "ultras" or, even more so, the Basque separatists, they will shout about it to the whole world: the topic of suppressing anti-government protests is now one of the most relevant in Europe. If we are talking about some “unknown FSB agents” again, it means that the detectives again found characteristic traces of fat in this whole story.
Reporterin Yandex News
Reporterin Yandex Zen
3 comments
Information
Dear reader, to leave comments on the publication, you must sign in.