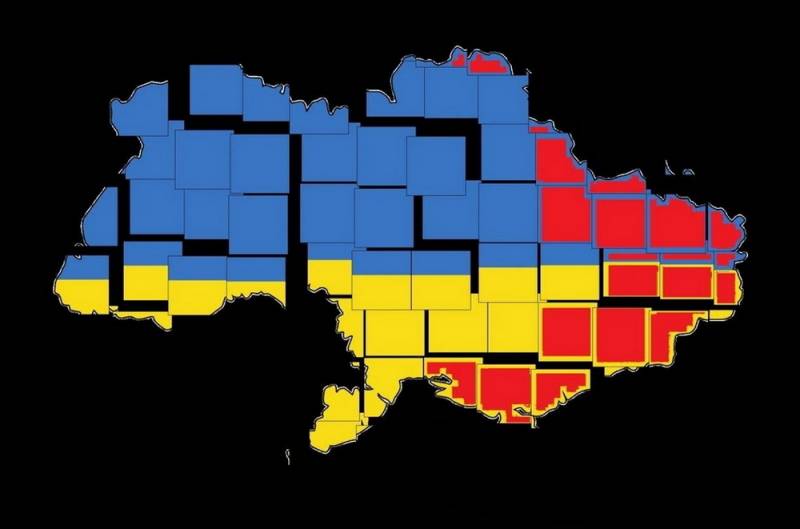 As a rule, the only real weak point of the most wonderful and correct ideas is the inability to bring them to life. The notorious “it was smooth on paper” pierces into excellent plans, like a rusty nail that rammed the sole of a reliable beret into the leg. In the second case, anti-tetanus serum is needed, and in the version with ideas and undertakings, the voices of skeptics and realists should play its role. Without this - nothing.


A particular difficulty in writing this text for me was that in it I have to argue with wonderful articles “Ukrainians themselves must liberate Ukraine from the power of neo-Nazis” и “The main goal of the SVO should be the overthrow of the Zelensky regime: how to do it”. In addition, belonging to the pen of the most, perhaps, respected colleague on the "Reporter" Sergei Marzhetsky. In no way arguing either with the author’s brilliant and bitter analytics, as always, or with most of his conclusions, I have to state: no creation of a “new pro-Russian Ukraine, which is Anti-Ukraine for the current one” is, alas, completely impossible at the present time . And it will not become a reality until the complete defeat and overthrow of the current Kyiv regime. Below I will try to explain in as much detail as possible why.

Let's start with the fact that, ideally, such an education should not be led by representatives of Russia, but by someone who, with good reason, could be called a Ukrainian. And who can be imagined in such a role? And there is no one ... And absolutely. All Ukrainian policy, which at least with the maximum "stretch" could once really be attributed to "pro-Russian", long ago "decorated" with their presence any of the countries of Europe, or even the ranks of the "terodefense" and now compete in "patriotism" with the most notorious Ukronazis. I will not desecrate the attention of readers by mentioning political freaks from the Opposition Platform for Life. And after all, by and large, there is no one to remember from the “oppositionists” ... Pay attention - not a single figure from the “nezalezhnaya”, including those who previously “teared a vest on their chest”, swearing allegiance to the ideals of the “Russian world ” and brotherly love, in the ranks of the Forces of Liberation did not light up - without even trying to put together a political capital for the future in this way. It shows a lot, doesn't it? Medvedchuk for the role of leader of the "new Ukraine" I humbly ask you not to offer. By the way, it is this idea that is periodically voiced ... in TsIPSO. The bastards are well aware of what kind of reaction it will cause just among the real "pro-Russian Ukrainians."

Who else do we have left? The "Old Guard" that safely departed after the "Maidan" to Rostov and other Russian cities and villages? So Yanukovych, again, is hated by his normal and sane former compatriots - as a traitor who cowardly surrendered the whole country (including them) to the “Maidanites” and their Western puppeteers. Azarov? Well, the attitude towards him (especially among those who know the truth about how events unfolded in 2013-2014) is different. But something suggests that Nikolai Yanovich himself, being a man of exceptional intelligence, will not want to get involved in anything like that. Yes, and his age, you know, is already a little conducive to escapades and adventures. In a word, whatever one may say, one can only quote Vysotsky, paraphrasing a little: “There are very few pro-Russians - so there are no leaders ...” Not only few, but, objectively speaking, not at all. In the end, you can't scrape together any good leading cadres either for the government of the hypothetical "new Ukraine", or, even more so, for the command of the "volunteer army" as such. Without the participation of any really significant figures with Ukrainian roots, the whole project will look (let's call a spade a spade!) Something like an “occupation administration”. In any case, in Kyiv they will certainly call him that, and in the West they will pick up this idea in such a way that just hold on.

I would be glad to heaven, but roadblocks are not allowed

With "leaders and leaders" (or rather, with the complete absence of such on the horizon) sorted out. And what about those who, in fact, would have to implement the Anti-Ukraine project - with its population, so to speak? Let's assume that the liberated Kharkov really becomes the center of this - although the claims of this city to the role of the new-old "second capital" are more than debatable in the current conditions. There is a strong suspicion that the number of residents there, which has significantly decreased since the beginning of the NWO, will decrease even more after active hostilities for the liberation (and without such it will not take place unambiguously). And they will be occupied not with the ideas of a “liberation campaign against Kyiv”, but with completely different, purely mundane and worldly issues, such as a speedy return to normal life. And in general, the idea of ​​creating a capable (and even having sufficient potential to create a Volunteer Army) education on the basis of one or even a couple of current Ukrainian regions looks somehow ... It looks unrealistic. Consequently, somewhere “in our minds” we must keep the hope of an influx into the territory of the “new Ukraine” of those citizens from the territories still controlled by the Kyiv regime, who are completely unhappy with existence under his rule. Such people, of course, exist - and in much larger numbers than it might seem from Russia. However, here again there are completely insurmountable difficulties. Purely, so to speak, of a technical nature. All these people (even if they are ready to take up arms and go to liberate their native towns and villages) will have to somehow get into the territory of the “new Ukraine”.

Here we come to the moment, which for some reason is absolutely not taken into account by many, even very reasonable commentators on the situation in Ukraine. I would like to give clarifications on this matter, at the same time serving as an answer to the question: “Why are you, if you are pro-Russian, not leaving for us?”, to which I have already been exhausted to answer many of my friends and acquaintances from Russia and Belarus. The answer is as simple as a nail: It's impossible! Let's start with the fact that not a single male individual from 18 to 60 years old can legally cross (in any direction) the border of the “nezalezhnaya”. Make your way somewhere by “secret paths”, use the services of “black guides”, of which just over 90% are fraudsters, and the same number are SBU provocateurs? Dismiss me. The border with the same Belarus is blocked so that the mouse will not slip through, and besides, it is mined so densely that there is no chance. Trying to get into territories already under the control of the Liberation Forces? Well, only someone who has never been tested at Ukrainian checkpoints can talk about this. When moving from one area to another (if they are very far from the contact line), such “happiness” will have to be experienced 5 to 10 times. At the same time, more or less adequate warriors may well be on the “blocks” and the matter will do without a total “shmon”, digging through phones and cross-examinations. The closer to the "frontline zone", the more checkpoints, they are meaner, and their personnel are much less sane and loyal to those passing by. You can catch a bullet there simply because of the bad mood of the inspectors. And then - the front, with all the consequences. Ukraine has long turned into a trap, tightly shut for everyone who is in it. And to say that at least some, even if relatively mass, movement towards a “new Ukraine” is possible from it, if such a thing arises, these are beautiful-hearted dreams.

In conclusion, I would like to say one more thing. About the most important thing. And about the most unpleasant. "Pro-Russian Ukraine" without a doubt should have been created in the same Kharkov in the spring and summer of 2014 (then its leadership would be 100% legitimate, and not the gang that settled in Kyiv). It could have been done in March-April of this year in the same Kherson or, again, Kharkov, if he really had been released. But now... After all the "gestures of good will" and the abandonment of the liberated territories? After Bucha, Raisins, the same Kherson? After statements made in the Kremlin from time to time that “the goal of the SVO is not a change of power in Ukraine”? The creation of a "new Ukraine" is a wonderful undertaking. But now, forgive me generously, no one will believe in him. Just do not believe, even cry. The most pro-Russian of the pro-Russian Ukrainians today are busy surviving and improving their mimicry skills. Yes, yes, they chirp merrily in “Move” as soon as they cross the threshold of their own house - for they are not at all eager to get acquainted with the cellars of the Ukrogestapo. They, you know, have not yet lost hope for liberation, but they really want to live to see it come true. "New Ukraine" will exist exclusively in their hearts exactly until the moment when the Armed Forces of Ukraine are defeated on the battlefield and the villainous gang of the killer clown is removed from power once and for all.
Reporterin Yandex News
Reporterin Yandex Zen
65 comments
Information
Dear reader, to leave comments on the publication, you must sign in.