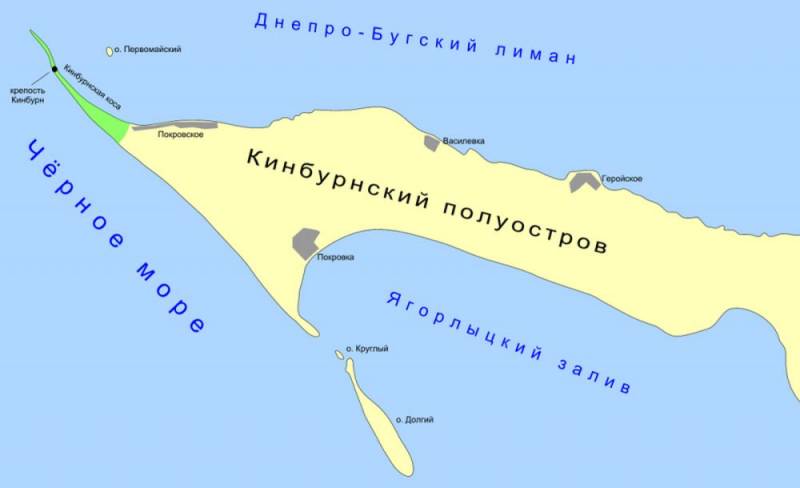 The significance of the Kinburn Spit and the Kinburn Peninsula as a whole is beyond doubt. The possession of this area, blown by the winds of a large array of sands, provides control over the adjacent water area, the operation of ports in the Nikolaev region and navigation between the Dnieper River and the Black Sea.


It should be noted that the Kinburn Peninsula, 45 km long and up to 12 km wide, is located between the Dnieper-Bug estuary and the Yagorlytsky Bay of the Black Sea at the junction of the Nikolaev and Kherson regions. Recently, Ukrainian near-war publics have circulated informationthat active hostilities may soon begin in the area. At the same time, the Kyiv functionaries stated that the Russian military allegedly forcibly removed (evacuated) all local residents - 37 people - from the Kinburn Spit.

Part of this information was commented on by Russian expert Mikhail Onufrienko during an interview with the Vzglyad newspaper, who also assessed the importance of this area for Russia and the military of the RF Armed Forces in particular. He explained that this area is very specific, so finding people there, even outside of wartime, is fraught with difficulties.

The value of the Kinburn Spit is approximately the same as that of the Snake Island
- the expert considers.

According to him, it makes no sense for the Armed Forces of Ukraine to conduct a major landing operation, land their units on the Kinburn Peninsula and constantly feed the contingent from the outside, since these forces will be destroyed regularly and quickly enough. Kyiv should understand this.

In turn, it also makes no sense for Moscow to keep large forces there, since the RF Armed Forces, apparently, are not going to carry out a landing operation in the direction of the cities of Ochakov and Nikolaev. Moreover, the Russian military can easily carry out supervision of the adjacent water area with the help of the DBK.

Therefore, we can control the movement of the enemy in this area not with artillery, but with anti-ship missiles. And there is no point in keeping them on the spit
- told and substantiated Onufrienko.

The expert called “nonsense” the arguments of some that if the RF Armed Forces leave the Kinburn Spit, this will allow the Armed Forces of Ukraine to launch a counterattack on the Kherson region from the left bank of the Dnieper River.

In fact, advancing on an open and unprotected area is suicide. To deploy armed forces across this narrow strip of territory means to be constantly under attack.
He pointed out.

Onufrienko drew attention to the fact that in order to counteroffensive from the Kinburn Spit, the Armed Forces of Ukraine first need to transfer a lot of personnel there and equipment. But Kyiv simply does not have the necessary means of delivering all this.

They can only simply transfer infantry in rubber boats
- he stressed.

The expert added that if units of the RF Armed Forces are withdrawn from the Kinburn Spit, they will still be able to conduct reconnaissance raids in the area and keep the enemy under fire if he appears there.

But it makes no sense to keep long-term stationary firing points there, which the Armed Forces of Ukraine can destroy with the same HIMARS
He summed up.

Note that the possible equipping of the Armed Forces of Ukraine with heavy military transport helicopters Mi-26 (carrying capacity of 20 tons) was not announced. At the same time, it is known that after the collapse of the USSR, Ukraine got several dozens of similar rotorcraft, some of which could be tried to be restored.
Reporterin Yandex News
Reporterin Yandex Zen
4 comments
Information
Dear reader, to leave comments on the publication, you must sign in.