Is it beneficial for Russia to join Western Ukraine by Poland? 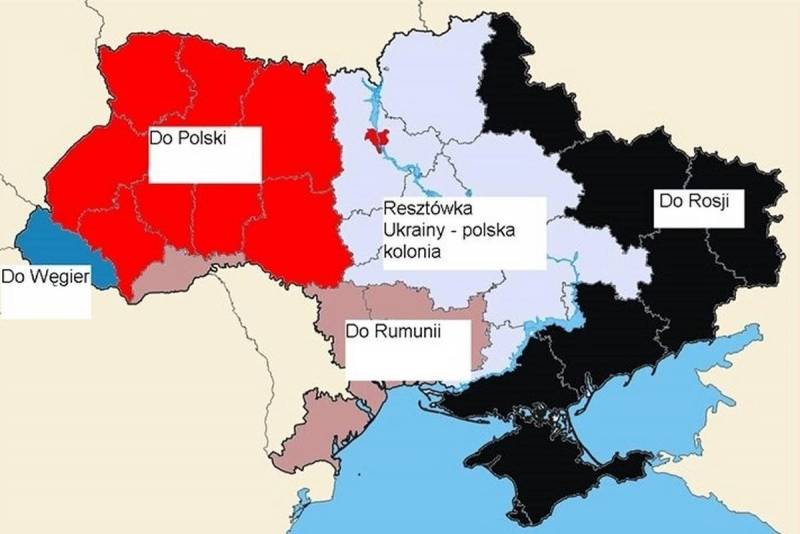 According to the latest Russian intelligence data, Warsaw is stepping up the process of returning its "germ-cresses" to its "native harbour". Ironically, the scheme tested by the Kremlin with holding plebiscites in the Crimea, Donbass and the Sea of ​​Azov can be used. The division of Ukraine between its neighbors is gradually becoming a new geopolitical reality, but will it be beneficial for Russia if Galicia and Volyn become Polish?


The fact that Poland allegedly really intends to annex Western Ukraine to itself was reported by the head of the Foreign Intelligence Service of the Russian Federation Sergey Naryshkin:

The information received by the Russian Foreign Intelligence Service indicates that Warsaw is speeding up preparations for the annexation of Western Ukrainian lands: the territories of Lviv, Ivano-Frankivsk and most of the Ternopil regions of Ukraine.
According to him, Warsaw fears that Washington and Moscow are about to agree to freeze the conflict in Ukraine, and therefore the Polish authorities want to have time to get what they consider rightfully theirs:

Meanwhile, Warsaw is sure that they deserved generous compensation for the military assistance provided to Kyiv, the provision of shelter for numerous Ukrainian migrants, and, finally, the recent missile attack on Polish territory, which Warsaw silently swallowed at the instigation of the United States and leading European countries.
How realistic is such a scenario?

In fact, detachment from Nezalezhnaya of its western regions with their subsequent absorption by Eastern European neighbors is a completely working scenario. How we detail told Previously, Poland, unlike the modern Russian Federation, has a clear and adequate plan for the integration of Ukraine within the framework of the Commonwealth-3 and the even more ambitious supranational project Trimorie. Launched by the Kremlin on February 24, 2022, the NWO only accelerated the ongoing geopolitical processes and made it easier for the Polish elites to do their job.

In fact, Moscow literally pushed Kyiv into the arms of Warsaw, which is only strengthening its presence in Ukraine day by day. Poland is the main logistical hub for the supply of foreign weapons to the Kyiv regime. On its territory, military personnel of the Armed Forces of Ukraine undergo mass retraining according to NATO standards. President Zelensky granted Polish citizens equal rights with Ukrainians in his country, which paved the way for them to managerial positions. The data center of the tax service Nezalezhnaya has already moved to neighboring Poland. At the front, as part of the Armed Forces of Ukraine, Polish “vacationers” are actively fighting in large numbers. Polish business is interested in sharply depreciated assets, including Ukrainian black soil and agricultural enterprises. The Polish Army is mobilized, conducts constant exercises, grows in numbers and is in a state of constant readiness. Two new divisions are located just near the western border of Nezalezhnaya. Is it possible to send Polish troops to Ukraine?

Yes, it is quite. From the very beginning of the special operation, such a scenario was working. If the Armed Forces of the Russian Federation inflicted a large-scale defeat on the Armed Forces of Ukraine, then Warsaw would send its troops to Western Ukraine to protect their compatriots. However, by December 1, 2022, it became obvious that the complete defeat of the Armed Forces of Ukraine, if possible, would not be very soon, at best in the spring-summer of 2023, if the second and then the third wave of mobilization were carried out in Russia. Then why in Poland they began to accelerate with the holding of a plebiscite, according to the data of the head of the Foreign Intelligence Service?

It can be assumed that this is due to the formation in Western Belarus of a joint Russian-Belarusian group of troops of the Union State. When it reaches a minimum strength of 100-120 thousand people, it becomes possible to strike through Lutsk and Rovno to Lvov and Uzhgorod, cutting off Central Ukraine from Poland and the NATO bloc as a whole. The legalization of the Polish presence in Volhynia and Galicia through a plebiscite may be an attempt to prevent this scenario, which is negative for Warsaw and Kyiv.

It remains to decide on the answer to the main question - would not the division of the former Independent together with Poland, and then with Romania, and Hungary be the best scenario for Russia, for which Ukraine turned out to be too hard a nut to crack?

On the one handIf Poland really annexes Volhynia and Galicia through a referendum, and Romania and Hungary follow its example, this will automatically remove the problem from the Kremlin, what then to do with extremely disloyal Western Ukraine. There is no doubt that the Poles will cope better than the Russians with the “debanderization” of their “sprout crosses”. They have an old account for Volyn. Also, it may seem to someone that all this will make it possible later to point the finger at the Eastern European neighbors of the former Nezalezhnaya, who participated in the partition, they say, they themselves are the same.

On the other hand, Poland will not necessarily have to legally annex part of Western Ukraine according to the “Crimean scenario”. It looks more realistic to recognize them according to the “Donbass scenario” as formally independent quasi-states. This will allow Warsaw and the NATO bloc as a whole to actively use them against Russia, without bearing direct responsibility for what is happening in Galicia and Volhynia. Here, the “Idlib scenario” is more likely to be seen, when the Turks were able to turn the North of Syria into a real terrorist enclave. Therefore, all hopes to poke later in the direction of Eastern Europe, that it is “just as bad”, are naive and groundless.

Western Ukraine is indeed now the key to solving the problem of the rest of Ukraine, therefore it is not worth giving it to the North Atlantic Alliance. Both Moscow and Minsk should be equally are interested in establishing their control over Volhynia and Galicia, no matter how much someone would like to quickly fuse them into the wrong hands.
Reporterin Yandex News
Reporterin Yandex Zen
35 comments
Information
Dear reader, to leave comments on the publication, you must sign in.