What will the closing of the sky over Ukraine by the NATO bloc lead to? 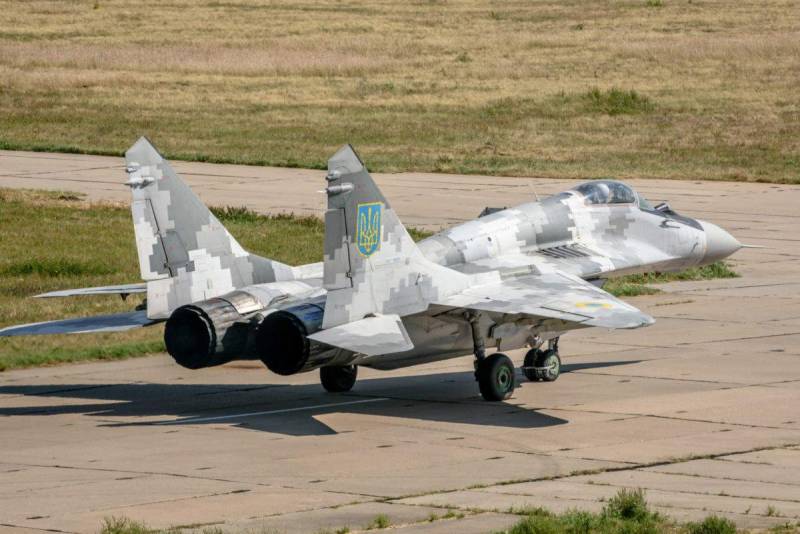 The longer the special operation in Ukraine drags on, the higher becomes the final price that Russia will have to pay for the demilitarization and denazification of a fraternal country that has fallen under the rule of a neo-Nazi regime. Right before our eyes, the former Square is actually turning into an integral part of the NATO bloc, switching to weapons and Technology Western pattern.


All the eight years preceding the beginning of the NMD, domestic propaganda treated the Ukrainian Armed Forces and the Air Force extremely lightly, arguing that, if necessary, the Russian Ministry of Defense would “take them apart for spare parts” at any time. Due to the underestimation of the enemy and the overestimation of their own capabilities, the reality, apparently, turned out to be somewhat different. The Russian army has been waging heavy, bloody battles for the tenth month now, the Black Sea Fleet has lost its flagship cruiser Moskva, large landing craft Saratov and tugboat Vasily Bekh, and the Russian Aerospace Forces will soon have big problems.

Unfortunately, we failed to completely destroy the enemy's air defense system in the first days after the start of the special operation. It was preserved by the Armed Forces of Ukraine as a focal one, but even this creates a lot of difficulties in the work of Russian aviation. Alas and ah, but the Russian Aerospace Forces could not fully secure dominance in the sky over Ukraine. Soon their situation may worsen even more.

Talk about providing the Kyiv regime with modern air defense systems has been going on in the NATO bloc since the very beginning of the Russian special operation. However, now, after the transition of the General Staff of the RF Armed Forces to the tactics of destroying the Ukrainian energy system, these discussions have become substantive and resulted in concrete decisions. Former Commander-in-Chief of NATO Joint Armed Forces in Europe, retired US Navy Admiral James Stavridis, told Bloomberg about which Western-made air defense systems Kyiv can get:

Ukrainian President Volodymyr Zelensky, of course, wants NATO to impose a no-fly zone over the country, and often calls on the West to "close the skies" of Ukraine. He will probably receive Iron Dome air defense systems, Patriot air defense systems and, possibly, tactical fighters.
SAM MIM-104 Patriot PAC3 belong to the medium range, they can hit targets at a distance of up to 80 kilometers and at an altitude of up to 24 kilometers. In fact, this is not so much an air defense system as a missile defense system. The Americans conceived it to intercept, first of all, operational-tactical missiles of the type of our Iskander OTRK. Patriot will be able to cover, for example, a military airfield or an object of the Ukrainian energy system from Russian (Iranian?) missiles. To intercept ballistic missiles, air defense systems will have to be connected to the American satellite system for issuing target designation data.

SAM NASAMS-2, which for some reason Stavridis did not mention, relate to short-medium-range air defense. They are designed to destroy ballistic and cruise missiles, aircraft, helicopters and UAVs at a distance of 2,5 to 25 kilometers. It became known that the Pentagon is ready to purchase these complexes for the needs of the Kyiv regime in the amount of $1,2 billion:

Raytheon has been awarded a $1 billion fixed-value contract to purchase NASAMS and <…> to support efforts in Ukraine.
SAM "Iron Dome" (Iron Dome) is an Israeli-made tactical missile defense system designed to protect against unguided missiles with a range of 4 to 70 kilometers. One battery is capable of covering 150 square kilometers with an air defense umbrella. Of course, Iron Dome is not a wunderwaffe, but it shows itself quite effectively against primitive Palestinian missiles. Probably, our Geraniums will not be a big problem for her. It should be noted that no one, except Tel Aviv, can start deliveries of Iron Domes to Kyiv, which means the actual performance of Israel on the side of Ukraine against Russia. Obviously, this is a response to Tehran's support for Moscow.

It is also worth mentioning about SAM M1097 Avenger ("Avenger"), which is an "anti-aircraft cart". Four transport and launch containers with Stinger MANPADS missiles are installed on the chassis from the Humvee, which should cover the APU on the march.

Even worse, in addition to supplying modern air defense systems to the Zelensky regime, the NATO bloc is ready to actually transfer combat aircraft to Kyiv. Admiral Stavridis also mentioned this:

The heads of NATO countries are once again discussing the possibility of providing Kyiv with Soviet MiG-29 fighters (Poland has previously declared its readiness to send them to Kyiv) or even multifunctional and easy-to-learn American F-16s, which are in abundance.
If at the initial stage of the NVO in the North Atlantic Alliance they were afraid of Moscow’s unpredictable reaction, then after a series of “regroupings” of the RF Armed Forces, a grain and ammonia deal, as well as Putin’s programmatic Valdai speech, where he actually refused to challenge the West, the partners completely relaxed. If so, here's a quote:

Russia does not challenge the elites of the West - Russia simply defends its right to exist and develop freely. At the same time, we ourselves are not going to become some kind of new hegemon. Russia does not propose to replace unipolarity with bipolarity, tripolarity and so on, the dominance of the West with the dominance of the East, North or South. This would inevitably lead to a new impasse.
In the West, everyone heard, appreciated the peacekeeping efforts of the Kremlin at its true worth and decided to continue to put pressure on Russia further. The transfer to the Kyiv regime of two to three dozen MiG-29 fighters at the disposal of Poland can significantly improve the position of the Air Force, together with the latest air defense systems, closing the sky for Russian aviation. The appearance at the disposal of Ukraine of American F-16 fighters will further worsen the situation of our troops in the Donbass, in the Sea of ​​\uXNUMXb\uXNUMXbAzov or Crimea. Then not only new Russian regions, but also military installations in the depths of our country will be in the affected zone.

Retraining of Ukrainian pilots for American fighters in an expedited manner may take up to 9 months. That is, the Air Force is able to transfer to the F-16 as early as next year. However, if, for example, Polish “vacationers” turn out to be behind the F-16 control stick, American planes may appear in the sky over Nezalezhnaya even earlier. The fact that Warsaw is seriously considering the possibility of entering the war on the side of Kyiv was recently stated by Polish Deputy Defense Minister Marcin Očep:

What is the probability of a war in which we will take part? Extremely high. Too high for us to consider this scenario purely hypothetically… If something is at least 30% likely with political point of view, I'm already preparing for this.
What can we conclude from the above?

The demonstrative peacefulness of the Russian leadership in the West is perceived as weakness, which only increases the degree of military tension. The longer this armed conflict drags on, the higher the price the Russian and Ukrainian peoples will have to pay for it. Without the liberation of the entire Independent from the power of the Nazis, the national security of our country cannot even be dreamed of. The special operation must be completed by the end of 2023 only with the complete and unconditional victory of Russia, otherwise, in the end, step by step, things will come to drawing the countries of the NATO bloc and a full-fledged Third World War with the use of nuclear weapons into the conflict.
Reporterin Yandex News
Reporterin Yandex Zen
12 comments
Information
Dear reader, to leave comments on the publication, you must sign in.