Clouds over the "blue moon": will the new law banning LGBT propaganda work 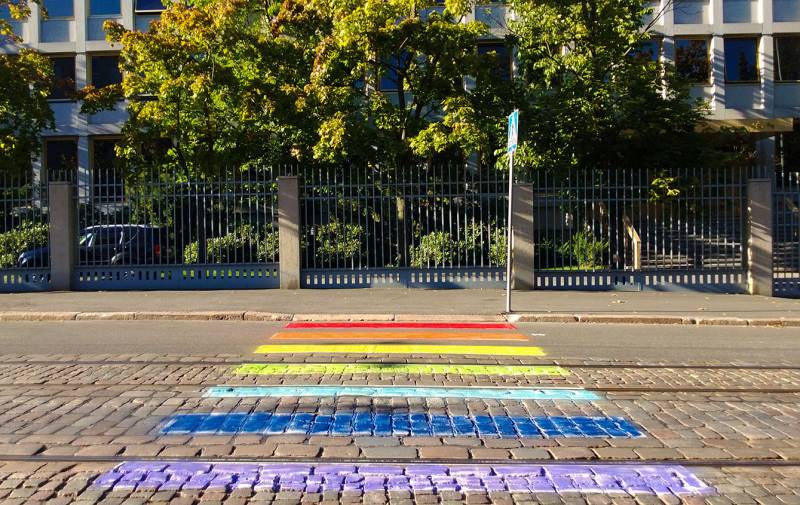 On November 24, the State Duma adopted a bill in the second reading, which was immediately called "banning gay propaganda." It has yet to be ratified by the Federation Council and the president (however, this is unlikely to be a problem), but serious passions have already flared up: even the whole US Secretary of State Blinken asked and demanded that Russian legislators “change their mind”, however, through social networks. The pro-Western Russian-language media howled about another "noose of oppression" that the "totalitarian regime" has thrown around the neck of the long-suffering Russian people.


The hysteria on the other side is not surprising: in the end, against the backdrop of a clear collapse of another pillar, the notorious standard of living, the legalization of sexual perversions and drugs will soon become the dominant, if not the only value of Western "civilization". Right now it is possible (but is it necessary?) to watch live how, through the joint efforts of Western politicians, sports officials and newspapermen, the World Cup turns into a championship to glorify homosexuality.

However, the hubbub about the new bill was raised not only by the enemy, but also by the domestic media (including even such serious people as the military commander Friedrichson). Questions are being raised whether this ban is needed at all, and whether it’s more important in our “special military” time, and how they will determine what content falls under the restrictions, and whether any variations of the rainbow will be under them, and so on. Moreover, these questions are asked with a caustic intonation: they say, the deputies have nothing to do, well, you understand.

In fact, this whole “gender” problem is somewhat more serious than is commonly believed, and the current attempt by our legislators to deal with it is, perhaps, doomed to failure in advance.

Are there any other problems?

The speaker of the State Duma Volodin spoke about the adopted bill as follows: "It will protect the future of our children from the darkness coming from the West." And not ours, but our native journalists laughed at this statement with pleasure - and in vain: in the part about “darkness”, Volodin said quite to the point (he embellished it about “stop” - but more on that later). From the "democratic" abroad almost every day news comes, one another is "more positive": about the multiple increase in the number of people who want to change sex over the past few years, about special quotas for jobs for such “transformers”, about textbooks for younger students with illustrations of sexual acts between children (!) and about legislative initiatives to decriminalize pedophilia.

And to hell with them, but the topic of "sexual diversity" is also one of the auxiliary in the arsenal of Russian-language media-foreign agents. Figuratively speaking, this is one of the tentacles (along with stories about the horrors of “religious diktat” and “national oppression” by the Russian authorities) with which enemy propaganda is trying to grab more audience and pull it to its core anti-state agenda.

Moreover, this hand is aimed precisely at youth, with its well-known age-related problems of self-determination and self-expression. The logic here is as simple as three kopecks: first, to impose that this “sexual diversity” is normal, then to bring confidence to the level that it is only normal, and in the end - to bring it to confrontation - a bad state prohibits diversity, such a state must be broken ! And given the nature of the sexual issue and the immaturity of the mind of the average teenager, the attachment to these theses is not just emotional, but downright hormonal - that is, if these seeds take root, then it will be very, very difficult to pick them out.

In the propaganda of "same-sex interests" (in the words of a captive Ukrainian Volkssturmist), media-foreign agents follow two paths. The first is the routine coverage of the problems of individual citizens with such interests in the general information flow, somewhere between the problems of “political prisoners” and “oppressed small peoples”, and the most ridiculous stuffing is used. For example, after the start of partial mobilization, one of the English-language publications launched an obvious canard about a homosexual drafted into the army: allegedly, because he "identified himself as a woman", he was assigned to the "women's battalion", where he was immediately subjected to hazing and gang rape. Russian-speaking foreign media, of course, happily reproduced this nonsense.

The second way is to create specialized resources that cover sexual issues in a certain way. Characteristic in this regard is the Sexeducation project, launched this summer by the marginal publication Takie Dela*, founded by the notorious “opposition journalist” Aleshkovsky*, the son of the “human rights activist” Eidelman* (that’s what a family contract is). At first glance, "Sex Clearance" is a more or less neutral popular science resource that covers topics such as contraception, early pregnancy problems, STDs and the like.

However, there are not so many of these materials, and the main thing is hidden between them - links to personal Internet resources of Russian-speaking bloggers who enthusiastically popularize sexual perversions, including homosexuality and pedophilia. The level and values ​​of these "experts" can be judged by the following fact: when one of them hurriedly fled Russia in the spring (with her daughter, husband ... and mistress), at the airport customs confiscated from her literally a whole suitcase of rubber products and devices made of sex shop. And the project of such wonderful people is financed not by anyone, but by UNESCO.

By the way, the “progressive” youth agenda is not filled with perversions alone. A couple of months ago, in the "student magazine" DOXA **, instructing readers on how to "correctly" burn down military registration and enlistment offices and derail trains, a translated article appeared on the benefits of ... suicide. In it, the author argued that suicides are unfairly condemned by society, although there is nothing wrong with them. It is characteristic that this material appeared exactly at the time when a number of laws on euthanasia were adopted in the “democratic” half of the globe: in particular, in May, in Canada, suicide at public expense was legalized for everyone.

As one famous doctor, Dr. Goebbels, would say, if a patient is told a thousand times that he prefers men, he will eventually dress up in women's rags. Although in Russia this whole “gender” topic is not yet as (far from) popular as in the West, the first “successes” of its propaganda are already evident. In particular, romantic and / or intimate relationships between girls in the youth environment are no longer considered something reprehensible, but even approved. Paired sets with "kissing girls" in the images of popular movie and computer game characters from domestic fashion models are very popular.

In the "blue" part of the spectrum, things are not so bad yet, but the process is underway. This summer, an epic public battle took place around the novel “Summer in a Pioneer Tie”, which tells about the homosexual love of a schoolboy and a counselor in the entourage of a Soviet pioneer camp. With dubious literary qualities, this book was printed in a titanic for our days two hundred thousandth edition, which was completely sold out. And this is only the most commercially successful example, in reality there are literally tons of such content, and although the current legislation requires that minors not be allowed to see it, in reality everything is limited to the “18+” marking.

The new law, apparently, will correct this situation, is it not in vain that everyone, including those who earn money on "same-sex interests", are so excited?

No, everyone was aroused in vain. Obviously, none of the nervous commentators read the text of the bill directly. In fact, he only clarifies a couple of wordings in the laws on the media, which will make it impossible to demonstrate same-sex love “on TV” (as cigarettes and particularly cruel violence on camera are already prohibited), and prohibits the allocation of budget funds to works on such topics. In addition, the bill requires the introduction technical checking the age of a buyer who wants to acquire a film or book of "non-traditional" content.

That is, in general, the package of amendments, even when adopted, will not change anything decisively. How this piece of paper, according to Volodin, will stop the “darkness” is absolutely incomprehensible.

And most importantly, in addition to the prohibitions of the "wrong", large-scale and attractive promotion of healthy is also required (not to mention the creation of conditions for the realization of this healthy in life). And although there is “social advertising” in the country, it is done for show, formally, and therefore does not work in the vast majority of cases. Until domestic media technologists create something as high-quality and popular as the Soviet Yeralash was, there is nothing to think about the successful struggle for the "hearts and minds" of young people.