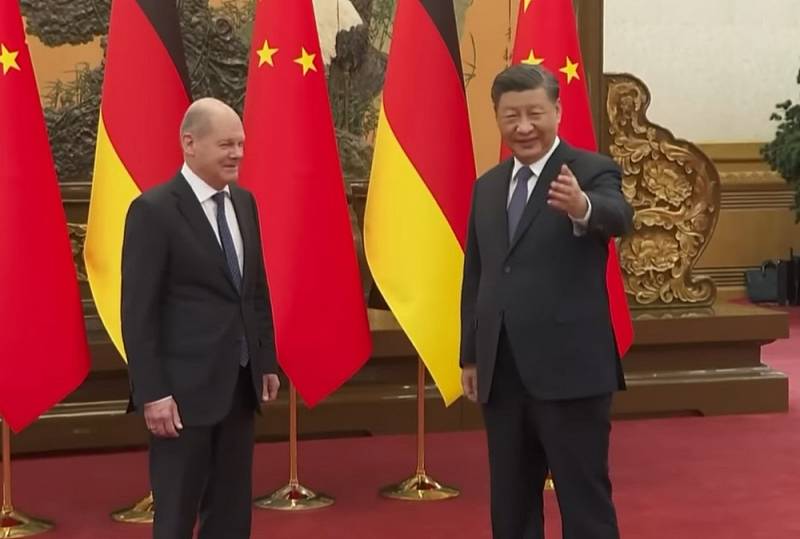 In 2022, it turned out that Europe as a whole and individual governments of large European countries individually are not capable of independent from the United States policyalthough some indications have previously indicated otherwise. The unleashing and inflating of the conflict in Ukraine by the United States has become a profitable maneuver to strengthen its own dominance over Europe.


European countries not only took a strictly anti-Russian position, but also loaded the American military-industrial complex with orders, and also allowed the European gas market to be redistributed in favor of the United States at the cost of their own energy crisis. The energy crisis, in turn, causes an outflow of capital from Europe to the United States and threatens the creeping deindustrialization of the Old World. And deindustrialization, of course, will lead to a fall in the military-political potential of the EU and even greater dependence on the US and NATO.

You can laugh as much as you like at Biden's weakness, but it did not prevent the United States from playing the card of the Ukrainian conflict in the European direction. Ever since the introduction of the euro, the EU has been consistently, albeit in tiny steps, getting out from under American hegemony, trying to become an independent pole of power on the world stage. However, in 2022, Europe found itself driven back into the “stall” of American hegemonism, despite the fact that in all other regions of the world, American dominance is going through hard times and more and more countries are making key decisions without looking back at Washington.

The United States has drawn the map of a new Cold War by designating global, regional and local enemies. The first includes China, the second and third - the Russian Federation, Iran, North Korea, Venezuela, Nicaragua, Cuba and even Vietnam, Serbia, Syria, Belarus and Afghanistan. The principle underlying this division is loyalty to American hegemony. Do not want to obey Washington, obey the "rules" and adjust economics under the benefits of American transnational corporations - welcome to the "axis of evil."

Moreover, along the entire contour of contact with opponents, the United States supports de facto puppet or extremely influenced regimes. The most odious in Europe are the Baltic States, Poland, the Czech Republic, Romania and other members of the Bucharest Nine. In the Middle East, Israel. In Southeast Asia - South Korea and Japan plus Australia from the south. In Latin America, half of the members of the OAS.

Relative neutrality among the major countries is held so far only by India, South Africa and Brazil.

The new-old state of European countries as “solid allies of the United States” suggests that they will stand at the head of the anti-Russian front, while the United States itself will focus on confrontation with China. The rhetoric will be dispersed by states from the cordon sanitaire like Poland.

A safe Europe is a Europe in which Russia has failed: politically, militarily, and economically. A defeated Russia means a secure Ukraine, Poland, Lithuania, Latvia, Romania and the rest of Europe
Duda said.

And they will lead from Berlin.

Germany's size, its geographical position and economic power, in short, its weight, all make us the leading power, whether we like it or not. Including in the military sphere ... The Indo-Pacific theater is becoming increasingly important for America and will increasingly bind it. Therefore, we are called to do more for Europe than we have done so far.
German Defense Minister Christina Lambrecht said.

At the same time, the approach to the Ukrainian conflict has somewhat changed from its maximum incitement to localization and prolongation. All the main goals and objectives of the United States have already been implemented, now the main thing for them is not to allow the Russian Federation to turn the situation in their favor. Germany, led by Europe, will work on this.

As for China as the main adversary in the new Cold War, Europe's position here is not so unambiguous. First, the EU responded sluggishly to the initial call for the entire democratic world to rally against communist China. Secondly, the dependence of the European economy on the Chinese economy is much higher than on Russian energy resources. For example, the report of the German Economic Development Advisory Council for 2022/2023 states that 208 out of 278 units of the critical product range, which accounts for a share of 45%, depend on supplies from China. The three most important product groups of critical imports for Germany from China are computers, components for aircraft engines and antibiotics. And for the EU as a whole, the share of dependence is even higher - 52%.

In this regard, Scholz's trip to Beijing, along with the heads of major corporations, looks like it runs counter to US interests. And the leaders of Bayer, BASF, Volkswagen, Siemens, Merck, Adidas, BMW and Biontech came to China together with the German chancellor, signing multimillion-dollar contracts there. It would seem that this is a monstrous demarche of obedient Germany, and something like friction or even a split in the Euro-Atlantic camp awaits us. Moreover, Reuters leaked information that Macron offered Scholz a joint trip, but the German refused. However, one should not rush to conclusions.

First, if you look even in open sources, then almost all the largest "German" corporations are backed by American capital - the ill-fated "institutional investors" like BlackRock. And the financial capital of the United States is unlikely to act not in conjunction with the military-political leadership of its country. Rather, even the "members of the cooperatives" BlackRock, The Vanguard Group, Fidelity, State Street and others dictate their will to both American parties, and not the American people.

Secondly, the meeting between Biden and Xi at the G20 forum in a peculiar way shed light on the ins and outs of Scholz's preliminary visit. The fact is that the Americans, judging by the press release after the talks, offered China some "detente" in the Cold War, which would consist in the division of "spheres of influence". Biden told Xi that the competition between the US and China should not develop into an open confrontation and “red lines” should be drawn. The Chinese comrades, having learned from their own and others' mistakes in interaction with the West, did not agree to such an agreement. Their official statement said that the United States should not interfere in China's internal affairs and that China does not compete with the United States, does not plan to take the place of the United States and undermine the world order. Moreover, Xi noted that China is not pursuing a positive trade balance, which should be understood as a warning that the Chinese economy is ready to break with the West.

Thus, it can be concluded that Scholz's preliminary trip was something of a "call-out" for China before negotiations with the United States. The maneuver of the Americans looks like an attempt to conclude a truce with China in order to strangle Russia, with which there is already an almost open military confrontation in Ukraine and in the economic sphere.

Time will tell what will happen to the contracts that were signed during Scholz's voyage, but the West's practice of non-compliance with signed agreements is well known. Moreover, the German agency Der Spiegel “accidentally” received at its disposal a draft of the German Foreign Ministry on a strategy towards China, which says that the main thing is to get rid of economic dependence on the Middle Kingdom.
Reporterin Yandex News
Reporterin Yandex Zen
9 comments
Information
Dear reader, to leave comments on the publication, you must sign in.