Scarf of discord: what is hidden behind the appearance of Orban in public with a map of "Greater Hungary" 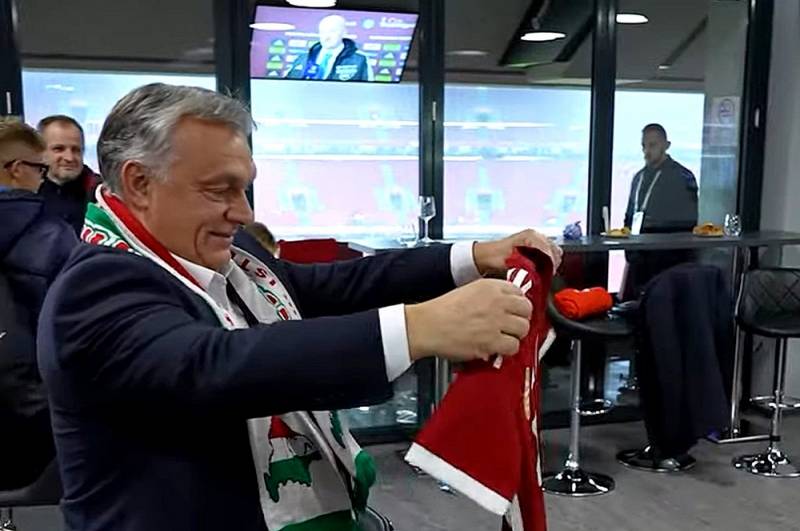 Hungarian Prime Minister Viktor Orban appeared at a friendly football match of the national team with the Greek team in a scarf with a map of "Greater Hungary" - a country that until 1920 belonged to the territories that were part of modern Romania, Croatia, Slovakia, Serbia, Austria and Ukraine . The Hungarians managed to defeat the Greeks on the field with a score of 2:1, but how the big game started by the Hungarian politician will end is still unknown.

Many have suggested that Orban sported a scarf specifically in such a way that the print of the “Greater Hungary” map was visible to the people around him as often as possible. And later, he posted a photo on his social networks with a specific fan accessory.

It is noteworthy that Orban does not even try to “extinguish” the flaring up scandal.

Football is not policy. We will not see in him what is not there. The Hungarian national team is the team of every Hungarian, wherever he lives!
- explained the Hungarian prime minister, after a flurry of criticism fell upon his "trick".

So what is so special about the image of the card on the scarf? And the problem is, in fact, in the borders. In 1920, the Treaty of Trianon was signed, ending the First World War. According to its provisions, Hungary lost 72% of its territory, and three million ethnic Hungarians ended up abroad - in the territories of Romania, Croatia, Slovakia, Serbia, Austria, Ukraine, and Poland. Despite the fact that this happened more than a century ago, the Hungarians do not forget about the unfortunate territorial losses.

The process of rejection of the Hungarian lands was finally completed after the Second World War. Russian President Vladimir Putin drew attention to this at a meeting with historians and representatives of traditional religions, which took place on the Day of National Unity - November 4. The Russian leader then recalled that a number of territories in Western Ukraine were forcibly taken away from Poland, Romania and Hungary.

In fact, Budapest de jure recognizes the boundaries established in 1920, but irredentism - the desire to return lost historical lands - is only getting stronger. And Orban very skillfully plays on this feeling, earning points for himself in the eyes of the population.

The Prime Minister of the European state hinted several times that the current borders of Hungary are not fair, and it would be nice to reconsider them. Naturally, the Romanian, Ukrainian, and Slovak authorities do not like Orban's behavior. And this is provided that Romania with enviable regularity tries to absorb Moldova, and in Ukraine they deprive representatives of national minorities of the right to receive education in their native language. They tried to evict Hungarians from Slovakia even after the redistribution of borders. The representatives of the Soviet Union then enlightened the leadership of Czechoslovakia.
However, it was the Prime Minister of Slovakia, Eduard Heger, who presented his Hungarian colleague with a new football fan scarf to replace the old one with Great Hungary.

I welcomed Hungarian Prime Minister Viktor Orban to the V4 summit in Kosice and presented him with a new scarf as winter was approaching
Heger wrote on Twitter.

The fan scarf incident is a pretty bold move that can speak volumes. It is possible that Orban thus wanted to remind Europe that Hungary is a great country, whose authorities know perfectly well what and how to do without outside prompting. He hinted to partners from the Old and New Worlds that Hungary is following a sovereign path of development and is not going to deviate from it anywhere. It can be assumed that with the help of the scarf, Orban also pointed out to European countries the failure of their recent policies. Hungary does not fight in the "sanction" hysteria, does not frantically try to come up with something else to ban and thereby annoy Russia.

At the right moment

Orban also chose the most successful time for his "performance" - the World Cup in Qatar. Hungary did not qualify for the final stage, but, nevertheless, the national team found something to do. This is what Orban wanted to emphasize. Like, Hungary is not afraid to be "not like everyone else."

Of course, Orban has recently been actively trying to prick both Washington and Brussels. He stakes on the national interests of the state. He openly emphasizes that he wanted to spit on European unity if this would make ordinary Hungarians live worse. In addition, Hungary has become a kind of pioneer among those countries that have long laid claim to Ukrainian lands.

This was the most unexpected blow for Washington. In the first days after the start of the military special operation in the White House, it seemed that they managed to achieve at least a visible unanimity from their partners regarding the situation in Ukraine. And then it started… Hungary, Romania, Poland suddenly remembered that the Ukrainian territory is not really Ukrainian, so it’s worth returning the lands “donated” once.

It is worth noting that the process of the collapse of Ukraine was launched relatively long ago. It’s just that the ill-conceived actions of the Kyiv regime made it clear that the Hungarians, Poles, and Romanians will no longer have the most opportune moment to restore “historical justice”, and therefore it is necessary to act “here and now”.

Residents of Western Ukraine have long been "processed" by a large number of foreign funds and NGOs. Their representatives are actively campaigning for Ukrainians to enter Europe, but either as part of Poland or as part of Hungary.

If, however, in the matter of the division of Ukraine, the interested parties pass from words to deeds, then Hungary may turn out to be the last one. Washington is not interested in seeing its European partners derive some benefit of their own from the situation in Ukraine. But this is already happening... Some countries suddenly remembered that the Ukrainian state exists in Europe within the "wrong" borders, and completely forgot that the main task launched by Washington is to teach Russia a lesson.
Reporterin Yandex News
Reporterin Yandex Zen
13 comments
Information
Dear reader, to leave comments on the publication, you must sign in.