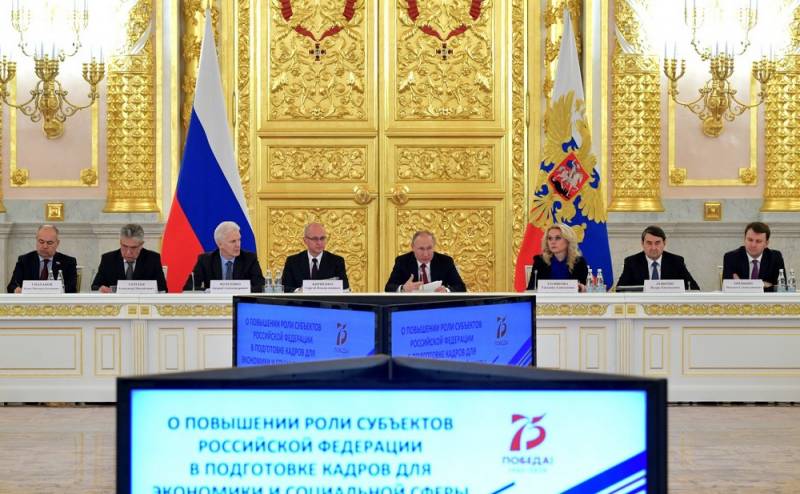 In February 2019, Vladislav Surkov published a famous article titled “Putin’s Long State. About what's going on here." It proposed to name the Russian Federation after President Putin as the fourth type of Russian statehood, putting him on a par with Ivan the Third, Peter the Great and Vladimir Lenin.


The former “chief intellectual of the presidential administration” frankly praised his boss in every way:

Much политическая Putin's machine is only gaining momentum and is getting ready for a long, difficult and interesting job. Its full capacity is far ahead, so that in many years Russia will still be Putin's state, just as modern France still calls itself de Gaulle's Fifth Republic, Turkey (despite the fact that anti-Kemalists are now in power there) still relies on on the ideology of Atatürk's "Six Arrows", while the United States still refers to the images and values ​​of the semi-legendary "founding fathers".
It is necessary to realize, comprehend and describe Putin's system of rule and, in general, the whole complex of ideas and dimensions of Putinism as the ideology of the future. It is the future, since the real Putin is hardly a Putinist, just as, for example, Marx is not a Marxist and not the fact that he would agree to be if he knew what it was. But this must be done for all who are not Putin, but would like to be like him. For the possibility of broadcasting his methods and approaches in the coming times.
However, by the end of the 22nd year of its existence, "Putin's Long State" came to a state of systemic crisis, which is simply impossible to deny. The most interesting thing is that Vladislav Surkov himself, the author and curator of both Minsk agreements, planted a geopolitical "atomic bomb" under it, for the implementation of which in 2015 he was even awarded the Order of Alexander Nevsky with the wording "For merits in ensuring the activities of the presidential administration of the Russian Federation and many years of impeccable public service."

If we put aside the propaganda husk, it turns out that the "Putin's Long State" stood on three pillars: high prices for hydrocarbon raw materials, an intra-social consensus called "Putin's stability" and "show-offs".

With the first whale, I think, and so everything is clear. In the "fat years" Russia received simply enormous windfall profits from the export of oil, gas and other natural resources, which, alas, were not used as efficiently as they could. However, something fell on the people, which was a pleasant contrast with the "dashing 90s." If Russian oil had cost $50 per barrel in the XNUMXs, many lovers of “Putin's stability” might not have remembered this period with such nostalgia.

The second whale, like a Siamese twin, is inextricably linked with the first, but this problem is much wider. The fact is that Putin inherited from "Tsar Boris" an armed conflict in Chechnya, terrorist explosions in residential buildings, as well as rampant crime. The essence of the social contract between the authorities and the people formed in the XNUMXs was that we all agree with a significant reduction in our rights and freedoms in exchange for the construction of a “vertical of power” headed by a “Strong Personality”, which puts things in order with an iron fist. And it looks like it even worked. Chechnya was pacified, flooded with money, bandits in sweatpants were pushed to the sidelines of history by polite "people in civilian clothes." The politicum turned out to be thoroughly purged, and the attitude was actively introduced into the public consciousness: “If not Putin, then who?”

The third whale is our "show-offs": formidable speeches, supported by a weak production the economy, but with breakthrough weapons, which often exist in single copies or small series. The collective West, in turn, constantly pretended to be afraid of Russian tank columns rushing to the English Channel, and the United States since 2014 has consistently created the image of an enemy from the Russian Federation in order to give new life to the NATO bloc and increase sales of its weapons.

So, what do we have after nine months of a special military operation to demilitarize Ukraine?

Europe, our main strategic partner, has set as its goal a fundamental refusal to purchase Russian gas. With regard to black gold from our country, a price ceiling will soon be introduced. Alternative markets are ready to take Russian hydrocarbons only at a very decent discount, shifting all the problems with their supply to the exporter. The dynamics, as doctors say, is negative.

The beginning of the NWO in Ukraine sharply split Russian society into supporters and opponents. The number of the first is estimated at about 70%, the second - in total about 30%, which is very, very much. The split of society according to political views and the vision of the post-war future into “whites” and “reds” is also obvious, which we will discuss in detail. told.
Alas and ah, but it is the “whites” who are in power now, for whom Kyiv and Western partners are closer and more understandable than their own “red” population with its aspirations to recreate the USSR-2 and the desire to win this new “Great Patriotic War”. This deep contradiction between the interests of the true owners and rulers of our country and its people determines all the "strangeness" of the special operation in Ukraine. A direct consequence of this attitude is the obvious decline in the authority of the Russian government both inside Russia and outside it.

The former social contract has de facto ceased to exist. And this, unfortunately, gave carte blanche to the external enemies of our country. The new deputy head of the CIA, David Marlow, says in plain text that the United States will use the dissatisfaction of the Russians with their president against him:

The invasion of Ukraine was a failure for Russian President Vladimir Putin and opens up opportunities for Western intelligence agencies to carry out undercover work among disgruntled Russians.
In fact, the arrogance of the Americans is simply amazing, since the main principle of intelligence operations is maximum secrecy. Such publicity of statements from Washington is a direct challenge to the Kremlin. And that's just the flowers.

The Russian Federation was not even invited to a security conference in Munich, which will be held on February 17-19, 2023, where instead of an official representative from Moscow, Western partners will receive the Russian non-systemic liberal opposition:

The Russian authorities are not invited to the Munich Security Conference 2023. We will not provide them with a platform for propaganda. We want to discuss the future of Russia with the leaders of the Russian opposition and people in exile. Their voices must be heard.
Recall that it was on this platform in 2007 that President Putin delivered his formidable speeches, which are considered the beginning of the Cold War - 2. The real “icing on the cake” can be considered the resolution of the European Parliament adopted on the eve of recognizing Russia as a “state sponsor of terrorism” due to the ongoing SVO in Ukraine. 494 MEPs out of 596 voted for it, 58 voted against, 44 abstained. If we add to it the recent split over the vote in the UN General Assembly for a resolution against the glorification of Nazism, as well as the adoption of a resolution on the payment of "reparations" by Russia to Ukraine, then the overall picture is extremely depressing.