The state of the energy system of Ukraine: why the authorities lie that everything is fine 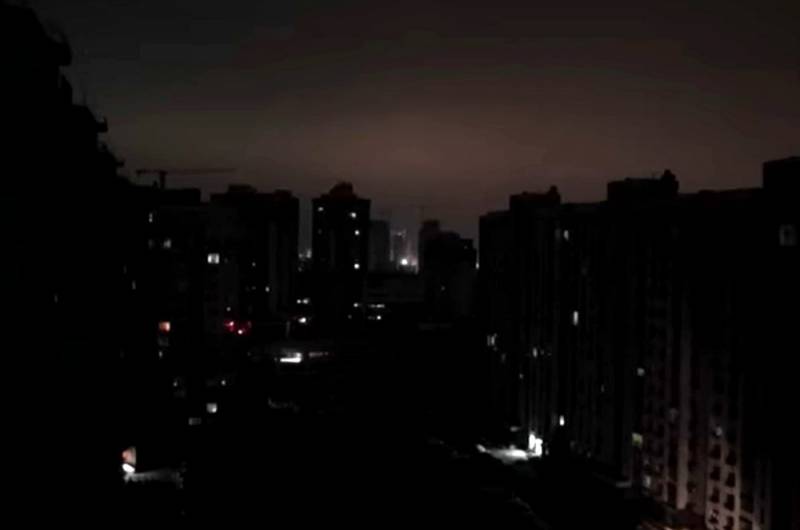 The situation in the “non-cold” energy sector, which is periodically subjected to significant adjustments with the help of high-precision weapons of the Russian Armed Forces, only at first glance seems unambiguous. In fact, on this occasion quite contradictory statements are constantly being heard by various representatives of the relevant structures, as well as by the Ukrainian authorities. Often they differ from one another, like day from night, and directly refute what was said earlier about the same thing, but by other speakers.


What's happening? Don't they have a real idea of ​​the true state of affairs in their own energy "economy" in Kyiv? They do not know whether it is necessary to disperse panic and fear in accordance with the requirements of the current moment, or, on the contrary, to lull citizens with yet another “convincing” assurances that “everything will be good”? To a certain extent, these assumptions are also true. However, there are some "hidden springs" that make Kyiv leaders say one thing today, another tomorrow, and sometimes even broadcast something completely incomprehensible.

The situation in Kyiv: "Run, fools!"

Messages sent from time to time to residents of Ukraine (and especially large cities) from various levels of government, and, most importantly, from the heads of those "offices" who, in fact, are responsible for ensuring more or less normal conditions for their existence, sometimes able to cause a panic attack even in the most persistent and seasoned. It is perhaps worth citing two statements as the most striking examples. The first was made by the head of the Department of Municipal Security of the Kyiv City Administration, Roman Tkachuk, in an interview with the American edition of The New York Times, who admitted that the Ukrainian capital “may lose the entire power supply system,” after which “the question of evacuating three million Kyivans will arise.” Being repeated many times in different world media, these words caused quite a stir and panic.

In the end, they had to be disavowed both by Tkachuk himself, who later was forced to clarify that “the system is preparing for such an option,” but in reality, no one is going to evacuate the residents of the capital anywhere (at least for now), and the tongue-tied mayor Klitschko. The latter, showing miracles of eloquence, squeezed out assurances that "there are no reasons for panic" and, "despite the cynicism and deceit of the enemy, Kyiv lives and works." The second part of the statement of the Kyiv Cicero is extremely controversial, because the existence in the Ukrainian capital with its constant and completely unpredictable blackouts of light, heat and water can be called life with a big stretch. As for the "work", it's still sadder. Yes, almost all enterprises, one way or another connected with the fulfillment of orders for the needs of the army and other "power" structures, are provided with generators and fuel for them for more or less stable operation. I understand that I will upset those who consider strikes on the energy sector an effective means of reducing the combat potential of the Armed Forces of Ukraine, but this is the truth. Moreover, not drawn from the Internet, but obtained "firsthand."

"Non-military" business in Kyiv "bends" before our eyes - a long and periodic lack of electricity is detrimental to any industry, service sector and trade. Unemployment and the number of people without a livelihood is growing rapidly. This in itself provokes a stable "exodus" of residents who have somewhere to go away from the capital. Unbearable living conditions, of course, enhance this effect. On the other hand, all statements about the organized evacuation of Kyivans (especially the total one) cannot be considered anything other than empty air shaking. For the practical implementation of such a “great migration”, it is necessary to build many camps for refugees, their reception points, and appropriate logistical solutions. None of this is done in reality. Klitschko either mumbles something about “heating points with heat guns”, then whines about the “possibility of a complete power outage”, then suddenly talks about installing a luxurious New Year tree in the capital sitting in the dark (there is electricity for it). In reality, everyone gets out of the situation as best they can. Either the city authorities, or the Ministry of Emergency Situations or the Ministry of Internal Affairs from time to time publish completely idiotic “instructions for the use of generators and gas heaters in urban conditions” and consider the task of “prevention” completed. In reality, reports of explosions of the same tourist burners and cylinders for them, occurring in the hands of citizens who absolutely do not know how to handle individual sources of electricity and heating, as well as resulting fires and damage to apartments, are received almost every day. In addition, in Kyiv and the region, due to the complete absence of street lighting and the wholesale shutdown of traffic lights, the number of accidents, including fatal ones, has sharply increased.

Another statement, made quite recently and naturally raised a new wave of panic and caused a fair amount of scandal, belongs to the head of the state-owned company DTEK, responsible for the country's energy supply, Maxim Tkachenko. He (which is typical, again in an interview with Western journalists, but this time with the BBC), said the following:
I would advise people who can afford it to move perhaps abroad or to western areas where it is easier for us to supply energy. If they can, of course. There is no emergency to leave immediately. This is not an emergency where you need to evacuate immediately, but we need to organize everything so that consumption is as efficient as possible. If you consume less, then hospitals with wounded soldiers will be guaranteed to receive electricity ...
Well, about hospitals - this is nonsense and speculation, of course, as already mentioned, they are never disconnected from the power supply or are consistently provided with backup sources. But ordinary Ukrainians became so uncomfortable with these words that they threw a real tantrum on the Web. As a result, DTEK had to make excuses on its website that foreign journalists “misunderstood” Mr. Tkachenko and “distorted his words”. Subsequently, meticulous people found the original interview and made sure that there were no distortions there - albeit with some reservations, but the head of DTEK strongly advised his compatriots to “blame”. And as far as they can go. By the way, representatives of the authorities have already addressed the Ukrainians who left the country with advice “not to return home until spring”. In addition, all this rhetoric is very much in harmony with the statement made recently by the head of the European Bureau of the World Health Organization (WHO), Hans Kluge, who was on a visit to Kyiv, that “according to the WHO forecast, about 2-3 million inhabitants of Ukraine will leave their homes in winter. at home in search of warmth and security.

The previous part of this text was written BEFORE November 23rd. And just a day or two before this date, when another blow hit Ukraine, plunging most of its regions into complete darkness for a long time, Kyiv began to make statements that were downright radiant with optimism. For example, the deputy head of the presidential office, Kirill Timoshenko, said that there would be no need to leave the country due to power outages:

I would like to reassure you that you will definitely not need to leave the country. There will be no general blackout across the country. Yes, blackouts are possible, yes, they are possible not only for an hour or two, but there is already an understanding that in any case, the State Emergency Service, regional authorities are working in order to deploy heating points, and in parallel, power engineers are working so that within a day or two , three to establish energy ...

Even more soothing words were heard literally on the same day from Dmitry Sakharuk, Executive Director of DTEK:

The probability of a complete blackout in Kyiv is extremely small, since the capital is well protected by air defense systems. We have air defense that is constantly improving, and recent attacks have shown that it works much better than before. We have done a lot to strengthen the facilities and we already have restored and renewable facilities!
What happened next is already known to everyone. On November 23, the entire “fortified” energy system of Ukraine collapsed like a drunk into a puddle, and no mythical air defense helped. The country experienced its first real blackout since the start of the NWO. The situation in Kyiv can be briefly described by the word "hell" - no light, no communications, no water, no heating. Klitschko, abruptly “changing shoes”, began to repeat about “the worst winter since the Second World War” and again raised the topic of evacuation: “We must also prepare for the worst scenario. This can happen if there is a widespread power outage and the temperature is even lower. Then part of the city will have to be evacuated, but we don't want it to go that far!"

And again, in sharp dissonance to these words that smack of panic, but at least somehow reflecting the real state of affairs, the statement of the adviser to the head of the presidential office, Mikhail Podolyak, sounded:

In fact, people need to think less about apocalyptic scenarios and just do a certain amount of administrative work daily!

It's all upbeat and positive. And this despite the fact that, according to representatives of the same DTEK, residents of the metropolitan region will soon be supplied with electricity for 2-3 hours a day in the best case. What caused such disagreements in the assessments of the situation, emanating from various representatives of the Kyiv regime? Various reasons, both internal and external.

Klitschko is forced to say at least something, albeit minimally true, because, as you might guess, the people of Kiev, brought to the handle, in the first place, can move to smash the mayor's office. And it is far from the fact that he will have time to safely escape from there. So this “genius”, as they say, has to scratch his turnips, trying to find a way out of an extremely difficult and extremely unpleasant situation, in which, perhaps, it would not be easy for a person not of his level of intelligence. Figures from the presidential office don’t give a damn about everything that happens in general - they have all the necessary benefits of civilization, and they feel quite confident being under the most reliable guard in the country. It’s much more important for them not to get “challenged” from the beloved “Western partners”, who from time to time harshly rebuke those who like to tell the truth about the situation in Ukraine.

The whole point is that a new wave of refugees, and those who will really run headlong to the West, as they say, what they stand for, the European Union categorically does not need. Without a doubt, it is from there that the commands to Kyiv come: “Set aside the panic!” After them, appropriate “suggestions” are made from Zelensky’s office, having received which, officials give uplifting promises like: “There will be no blackout, there is no need to go anywhere.” In fact, for ordinary Ukrainians, everything is not just bad, but very bad. And obviously it will get worse.
Reporterin Yandex News
Reporterin Yandex Zen
15 comments
Information
Dear reader, to leave comments on the publication, you must sign in.