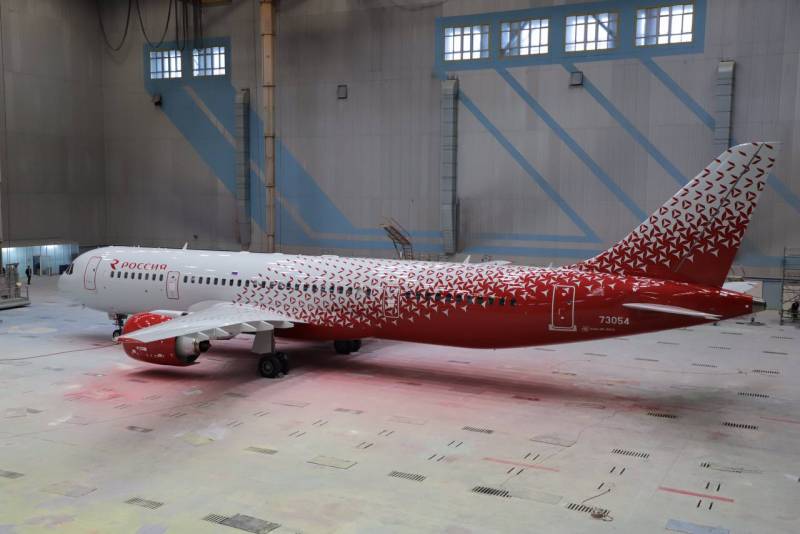 Spektr-Avia specialists in a huge workshop (hangar) at an aircraft factory in Ulyanovsk "dressed" the first medium-haul narrow-body passenger aircraft MS-21-300 with tail number 73054. The liner was painted in the colors of the Rossiya airline (part of the Aeroflot group ").


On November 24, PJSC "UAC" (part of the state corporation "Rostec") showed in a short video the entire rather lengthy process of painting the aircraft.

The process of transformation. When painting, only Russian-made materials were used
- PJSC "UAC" says in the communiqué.


However, according to the source of the Aviatorshchina Telegram channel, this is a prototype MS-21, which belongs to PJSC UAC and will not go into commercial operation. At the same time, it was clarified that the aircraft flew to the Ulyanovsk-Vostochny airfield on November 10 specifically for painting, i.e. applying a livery - coloring an aircraft in accordance with a specific color scheme.

But for now, be patient: this prototype of a modern medium-haul liner MS-21 will be operated by the Irkut corporation to train instructor pilots of our airline. This is only the initial stage - the corporate livery of Rossiya will be applied to three experimental aircraft of the Irkut corporation, and then the livery will be applied to aircraft that will become part of the fleet of our airline
- stated in the communiqué of Rossiya Airlines.

At the same time, the Inside Avia Telegram channel said that all airlines have their own permanent livery, which they can change whenever they want. There is also a temporary (special) livery - the coloring of one or more boards from the fleet, timed to coincide with an event. The total weight of the materials used can reach several hundred kilograms, while the thickness of the paint should not exceed 0,2 mm, and the cost of work reaches 10 million rubles.

Experts explained that the aircraft is first treated with a special “wash” that degreases the surface and removes the previous layer of paint. Then the entire surface of the fuselage is sanded and “primed”. For painting, a certain aviation paint is used with the necessary hardeners and additives. After the "primer" the first layer of paint is applied, then all the additional elements of the livery (small details, patterns, stickers).
Reporterin Yandex News
Reporterin Yandex Zen
Information
Dear reader, to leave comments on the publication, you must sign in.