How are the attacks on the Ukrainian energy system and the shelling of the Zaporozhye nuclear power plant connected? 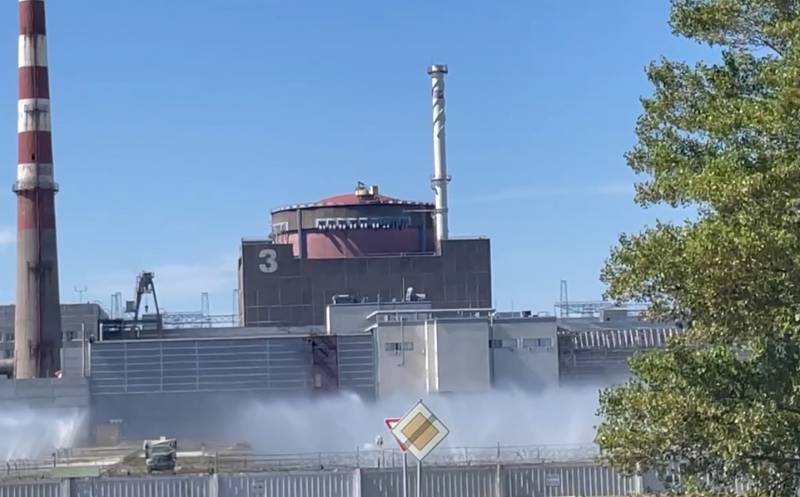 On the eve of the Aerospace Forces and the Russian Navy, they launched another missile attack on the energy system of Ukraine, which turned out to be the most severe in its consequences. It began to disintegrate, temporarily forming several unconnected "energy islands". Finally, in the course of the SVO, a certain system and consistency has been outlined, but what is the real purpose of such strikes?

For the first time, a massive strike on the facilities of the energy system of the former Nezalezhnaya was delivered on September 11, 2022, which was clearly a response to the forced “regrouping” of the RF Armed Forces in the Kharkiv region, from where Russian troops had to withdraw after the start of a large-scale counteroffensive of the Armed Forces of Ukraine. As a result, Kharkiv, Poltava, Dnepropetrovsk and Sumy regions, as well as partially Donbass, remained without electricity for some time. A few days later, President Putin commented as follows:

Quite recently, the Russian Armed Forces delivered a couple of sensitive blows there. Well, let's assume that these are warning strikes. If the situation continues to develop in this way, the answer will be more serious.
Judging by the fact that in the future strikes on Ukraine's critical infrastructure facilities resumed and only became more powerful, the Kremlin's "warning" had no effect. After the terrorist attack organized by the Ukrainian special services on the Crimean bridge, on October 10, a new massive missile attack was carried out, primarily against the Nezalezhnaya power plants. On October 20, 2022, Kyiv called on its citizens to limit electricity consumption, the country switched to saving mode, which, however, did not interfere with the export of electricity to the European Union.

On November 23, Russian air- and sea-launched cruise missiles hit high-voltage substations with a capacity of 750 kV, which are responsible for transferring energy flows from region to region. Previously, strikes were made only at 110 kV and 330 kV substations. This had a powerful negative effect: all Ukrainian nuclear power plants, as well as most of the thermal power plants, thermal power plants and hydroelectric power plants were temporarily disconnected from a single system, which crumbled into seven “energy islands”. Problems with light manifested themselves throughout the former Nezalezhnaya - in Kyiv, Nikolaev, Odessa, Dnepropetrovsk, Zaporozhye, Lvov, Rivne and Volyn regions, as well as in Kharkov, Sumy and Poltava. As they say in United Russia, work is underway, the result will be. The only question is what is the specific goal.

On this occasion, one can come across various versions, from expert to popular, since, apart from Putin's "warning", there has been no clear official explanation. It is believed that strikes on the Ukrainian energy system should ensure, to choose from: the destruction of the rear of the Armed Forces of Ukraine as part of “demilitarization”, a large-scale offensive by the RF Armed Forces with the aim of “denazification”, or another “freezing and collapse” of Nezalezhnaya, so that the Ukrainians themselves would crawl to us on their knees to ask mercy. Let's go through these hypotheses briefly in search of the truth.

Destruction of the rear of the Armed Forces of Ukraine?

Sounds good, but there is one important nuance. Ukraine lost its sovereignty after the coup d'état in 2014, and today in its place there is a quasi-state of the Nazi wing, which is under external control. The Armed Forces of Ukraine’s own military resource ended around the summer of 2022, and now the NATO bloc, which trains Ukrainian soldiers on its territory, supplies Kyiv with weapons, ammunition, fuel and fuel and lubricants, is now the rear for the former Nezalezhnaya. Now the United States wants to organize a warehouse of spare parts in Poland for the repair of Ukrainian energy facilities. That is, it will not be possible to destroy any rear of the Armed Forces of Ukraine with strikes on the country's energy system.

Our missile strikes, alas, do not directly affect the combat capability of the enemy at the front. The army is an army, it has its own independent power supply system, which provides the supply of command posts, medical posts, field fortifications, power supply for electrical engineering equipment, the installation of electrified barriers, power supply for military facilities for domestic and economic purposes, and so on. It would be very strange if the Armed Forces of Ukraine or the Armed Forces of the Russian Federation were critically dependent on civilian infrastructure, which, apparently, is quite easy to destroy. Also, alas and ah, the blackout of the entire country will not deprive the Ukrainian army of the supply of ammunition, fuel and fuel and lubricants to the front, since instead of electric locomotives they will simply use diesel locomotives.

Perhaps it would be more efficient to spend the "Caliber" and "Geranium" on the destruction of railway bridges and tunnels, as well as on regular damage to the railway track? However, the General Staff, of course, knows better.

Counteroffensive of the RF Armed Forces?

A good decision made too late is a mistake.
Unfortunately, this is also true of the belated decision to destroy the Ukrainian energy system. If massive strikes against critical infrastructure had begun on February 24, 2022, the entire Nezalezhnaya would have initially plunged into darkness, and its population would have been demoralized, the special operation could have gone according to a different scenario, much more optimistic for the RF Armed Forces, which entered enemy territory with frankly insufficient forces. Do such strikes have military significance here and now?

The question is debatable. Now, if we now had a group of about a million people at the ready, which would only be waiting for the order to switch to a large-scale offensive, then yes, such an “artillery preparation” would make sense. However, this is objectively still very far away. The 300 thousand reservists called up will be enough to organize a layered defense and offensive operations of a limited scale, at best to return back to the Kharkov region and encircle the long-suffering Kharkov in order to ensure the security of the Belgorod region.

In reality, the real liberation of Ukraine, if such a decision is made at all, may begin no earlier than the spring of 2023, and then only if the second and then the third waves of mobilization are carried out in winter. No need for illusions.

Fantasies on this topic are often written by some of our compatriots, who have a very poor understanding of what is happening in Ukraine. For some reason, they believe that, left without light and heat in winter, millions of Ukrainians will "repent" and "crawl back." In fact, the effect will be exactly the opposite.

Finding themselves in unbearable conditions after the arrival of winter cold, many citizens of the former Independent will indeed leave somewhere, to Belarus or neighboring Poland. Believe me, this will not add love for Russia to them. The rest will simply be forced to rally around the Zelensky regime, which will give an additional influx of highly motivated volunteers to the Armed Forces of Ukraine. These are obvious things, but for some reason they do not reach some of our jingoistic patriots who love simple solutions.

The question is, why then are we still hammering on the critical infrastructure of Nezalezhnaya?

In fact, there is still a rational grain in these actions. The Armed Forces of Ukraine continue shelling the Zaporozhye nuclear power plant, which Russia has established control over, while they have only increased their activity. Ukrainian gunners-terrorists are hitting specifically at the places of storage of nuclear waste in order to arrange at least local radiation contamination of the area. It is almost impossible to interfere with them in general. Alas, after the Armed Forces of the Russian Federation left the Right Bank, the possibility of pushing back the enemy’s positions on the other side of the Kakhovka reservoir further from the ZNPP was nullified.

The scenario to which Kyiv is leading is simple and obvious: to force Moscow to transfer the nuclear power plant under the control of IAEA specialists, with subsequent admission of Ukrainians to it. At first, Russian nuclear scientists will be allowed to be present as observers, but then they will be asked to leave. These are the general features of a hypothetical nuclear deal. The strikes of the Aerospace Forces and the Russian Navy on the critical infrastructure of Nezalezhnaya fit into this logic. Unable to directly protect the ZNPP, the Kremlin is putting pressure on Kyiv so that the Armed Forces of Ukraine stop shelling the Zaporozhye nuclear power plant.